A vision for the future 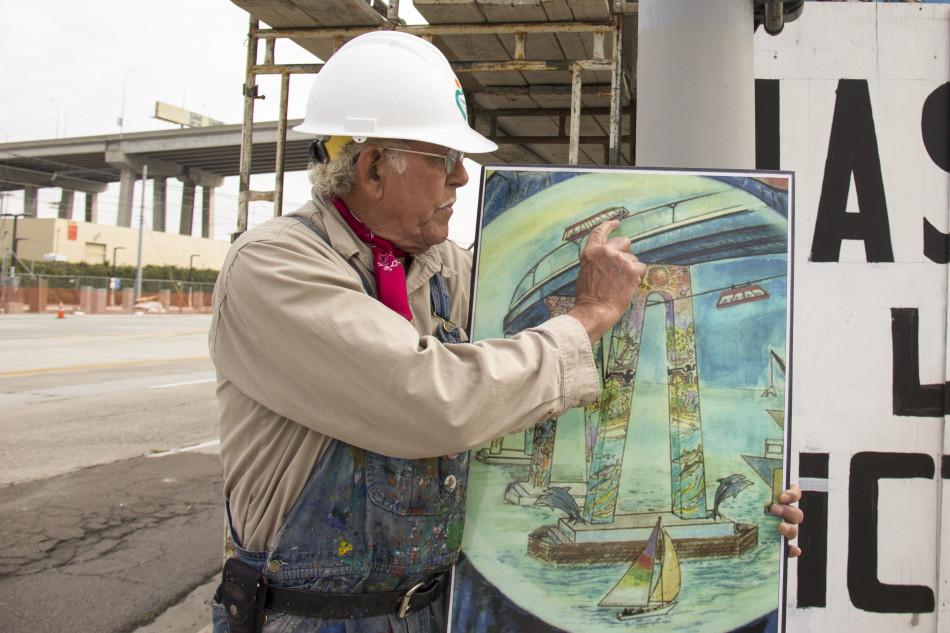 The colorful mural is going up on a free-standing wall adjacent to Restaurant Depot’s parking lot, across from the trolley station on Harbor Drive and Cesar Chavez Parkway.

Torres is a graduate of City College. He was a member of a group of artists who fought for permission to paint murals on the pillars of the Coronado bridge in Chicano Park in 1973.

Chicano Park is underneath the Coronado Bridge adjacent to I-5 freeway. According to the Chicano Park Steering Committee website, a defining moment came in 1970 when the state planned to build a highway patrol station at that site.

Frustrated by years of industrial development, residents of Barrio Logan responded by occupying the area. The I-5 freeway, the bridge, heavy industry and junk yards displaced residents and increased pollution, changing the character of the community.

This project is part of Torres’s ongoing effort to culturally enrich the San Diego’s Chicano communities through art.

A handful of City students from the Future Leaders Club turned out to help Torres paint the mural on the morning of Feb. 28, and have been returning to work on the project on Saturday from 10 a.m. to 2 p.m. since.

“I think it is important to preserve our heritage and our culture and especially our legacies,” said Torres, “that we have been working toward developing since the 1950s.”

The mural features many images of sea life and seafood processing when the ocean was at the heart of local industry. Torres states that he wants people to not only remember that history, but have young people take ownership of it.

“This mural represents all of the work of past generations that is going to be passed on,” explained CIty College student Tom Brady at the initial session.

The mural also features images of Mexican-Americans and Native-Americans, underscoring the diversity of Barrio Logan.

“I am coming here to see the beauty of it. People say the negative about other minorities, but….we have a lot of positives in us,” said Tasha Griffin, who is pursuing her Mental Health work certification at City.

The mural project is one of many efforts to revitalize Barrio Logan.

“The students have been coming to clean up the Cesar Chavez Park, helping the Port to keep it clean,” said Torres.

He is referring to the park owners — Unified Port of San Diego, a private corporation established in 1962 which manages 5,400 acres of land surrounding the San Diego Bay — according to its website.

The port’s jurisdiction includes the airport, the cruise ship docks and the industrial land south of downtown.

“There is something very important happening now, the master plan that was established by the community … including business, owners of property, residents and industry,” expressed Torres.

The Barrio Logan Community Plan encourages increased environmental, aesthetic and transportation standards along with a commitment to maintain the historic monuments, according to the city planning website.

The port authority, unions, industry and Mayor Kevin Faulconer are all opposed to the plan, arguing that it will reduce businesses’ profits and eliminate jobs. San Diego voters will decide the fate of the community plan in an election in June.