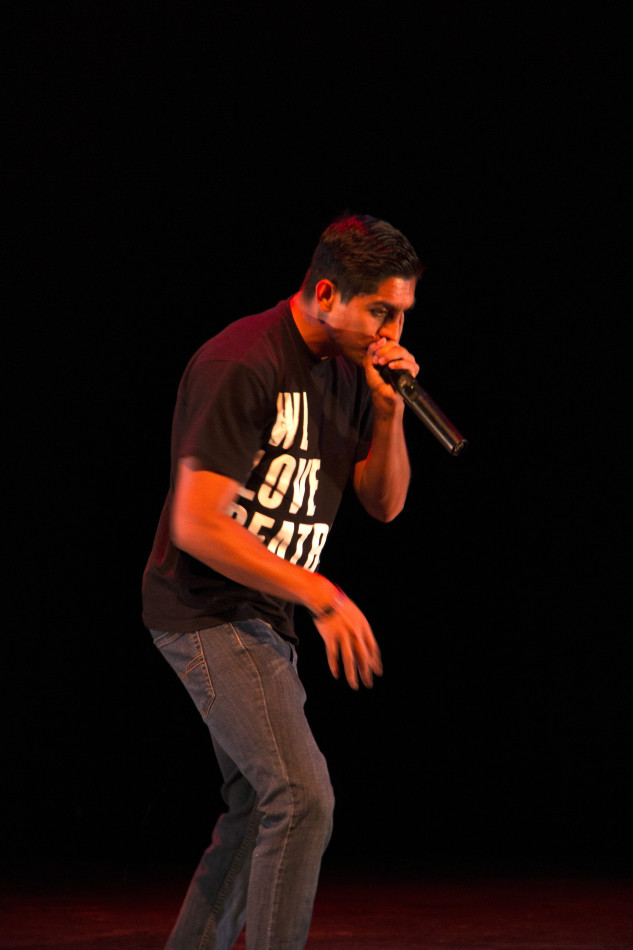 Luis Iturbide won over the judges at this year’s talent show,”Ain’t No Stopping Us Now,” with his original beatbox set where he performed vocal percussion of musical beats, rhythm, and sound.

At 7 p.m. the theatre was pitch black as the audience waited for the show to begin with a hip-hop dance perfo rmance by Robby Lindez, who showcased his energetic popping dance style.

“Ain’t No Stopping Us Now” showcased students, faculty, and even non students on the Saville Theatre stage to prove this city is filled with a diverse group of unique individuals.

All was made possible through talent show coordinator Tandy Ward, who has been organizing the event for the past six years. This year the show included singing, dancing, instrumental performances, spoken words, poetry and even beat boxing.

After each act, the curtain would come down and the spotlight would draw the audience’s attention to Ward, who would welcome the next act.

“I loved the blend this year, I like mixing it up,” Ward explained.

Several singers performed and included in their acts guitar, piano, prerecorded audio, or even went a cappella, which is what second place winner Tara James had to do after her audio shut off no more than 30 seconds into singing “I Believe.”

“At practice yesterday, everything was fine. I didn’t know the music was going to go off,” James explained in an interview after performing. “I just thought, the show must go on.”

Adding to the mix were two solo pianists, spoken word and poetry, a monologue.

Iturbide wasn’t the only one who performed an an original piece. Inside Nianda Speaks spoke words of enlightenment in his original “My Psalm” along with other original pieces from Vincent Rather, JC Valdez and Joshua Gibot.

Dr. Marilyn Harvey, one of the judges briefly explained, “There was the one we all agreed on, and that was it, it was unanimous. Then it was the other two spots we needed more discussion over and had to compare our differences to come to an agreement.”

Despite only three winning spots, all contestants left as friends and plan to continue to strive for greater things.

Pianist Rocky and singer Harrieth Sucaldito finished the show with a song “All of Me,” and were proud to have performed with the 16 talented acts.

“We put on a show we’re happy about,” said Sucaldito. “Rocky and I will make it to the top.”