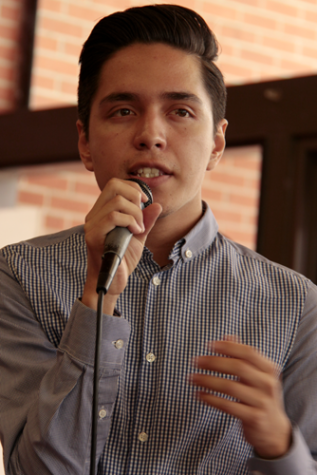 Adam Garcia addressing the City College audience at the election forum in the cafeteria on April 10. Photo credit: Celia Jimenez

Newly-elected ASG president Adam Garcia spoke briefly with the City Times about himself and his plans for City.

J: How did you first become involved with the ASG?

A: When I started my first semester here at City, my friend was interested in getting involved and she had run into the president. Then, (the vice president of the ASG, Michael Roderick) invited me and my friends to come to meetings… He said that a few positions were open and I just went for a senator position and as things progressed I really started getting into it.

J: When you were campaigning you took a survey and found out most people were looking for discounts, and you were working on a project to consolidate these discounts for students. Can you tell me a little bit more about that?

A: I conducted surveys of City students trying to figure out what is it they wanted the ASG to do for them, and some of them wanted discounts on certain things, such as discounts in the cafeteria, any aid the ASG can provide for them. Such as renting out calculators to the students, or even laptops, because I know that other community colleges have something like that where they rent out calculators to their students and laptops.

J: When did you decide to run for president?

A: I would say somewhere in February that we started discussing… I gave it a few weeks to think about it, and it finally just clicked in my head.

J: One of the things that was big in your campaign is building a community at City, do you have any specific ideas about how to strengthen City as a community?

A: I really do want students at City to get involved in clubs and that’s how I ultimately think we’ll build a community here at City. Getting students involved in clubs, having them participate in clubs, and most of all, coming to our meetings so that they can voice their opinion.

Another thing that I think would work is college hour. Just one hour where there is no instruction, students just hang out on campus and get to talk to each other and get to know each other. That’s how I think we’ll build community.

J: There was a vacancy in the treasurer position, has anybody been identified to take over that position?

A: With the treasurer position, our constitution requires a student to take a class in accounting. Although I think it’s a great experience if someone came in that has not taken any accounting classes, at the same time we’re dealing with money. It’s something that we all need to take care of, and there are a few people that are interested in the treasurer position

J: So whats going to happen to the budget in the mean time?

A: Right now it’s (handled by) Fiona Wilson, but if we were to go in a direction that we wouldn’t have a treasurer, the executive council would be in charge of the budget.

J: Are there any other projects or any other comments that you have, as far as things you’re looking forward to as president, or things you want to get done as president?