Solar students get hands-on learning and provide service to community 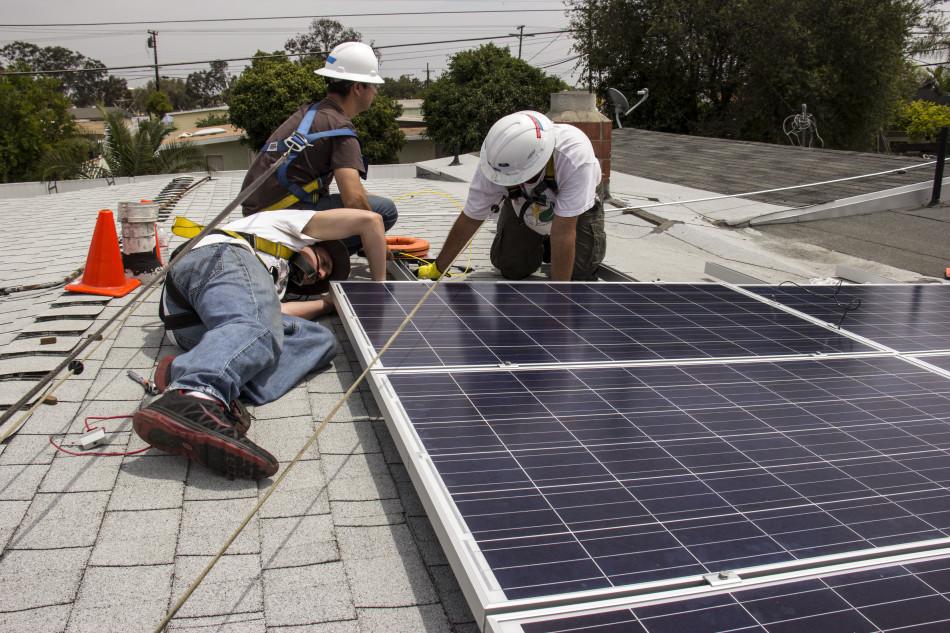 City College students participated for the first time in a hands-on project installing free solar energy systems in two houses in San Diego valued at $20,000 each.

The students worked alongside GRID Alternatives, an international non-profit organization which installs solar systems for low-income families and prepares individuals to work in that industry.

The students were part of two classes, Solar Energy Theory and Solar Energy Utilization Lab, which are part of the vocational program in the Engineering and Technology Department.

They built their expertise and practiced what they had learned in class by installing a home solar system from start to finish.

On the morning of April 15, eight students arrived at a home in Kearny Mesa.

There, the students built a rail-like structure on the side walk that would be the frame for the solar system.

Then they carefully raised the structure to the roof. They did it all under the supervision of their professor and three GRID Alternative staff members.

Two days later, the crew returned and installed a micro-converter, cabling and 15 solar modules on the roof structure.

They connected the modules to the main electrical panel using wires, turned the system on and waited a few minutes until the home’s electric meter detected the energy produced by the solar system.

This happened when the meter started running backwards, meaning the house was getting power from solar energy.

The students learned how to use the Solmetric SunEye, a device that helps identify the best location to install for the solar panels and predicts the expected solar energy production.

The system installed at Kearny Mesa will cost the homeowner approximately $20,000 plus the cost of labor, usually done by two workers, which is about $1,600.

This system will produce about 3,700 watts under ideal conditions – 2,940 watts average throughout the year.

Each solar system is personalized according to the needs of the household and the location is chosen based on different parameters such us altitude, inclination and shade from elements around the house.

Homeowners’ savings vary, depending on how the system was seized, but it eliminates or highly reduces their monthly electricity bills, and they can buy or lease the system.

Their professor, Thomas Davies, believes there is no better way to improve learning than by practicing and the problem-solving issues the students encountered while installing the systems.

“It was a perfect complement to our in-class instruction…Not only are we learning the field, we get to help in a very worthy cause,” said Andrew Brown, a student who’s pursuing a certificate in Solar and Heating and Air Conditioning.

Davies plans to make this project permanent in his classes and provide his students with practical experience they cannot achieve in the lab.