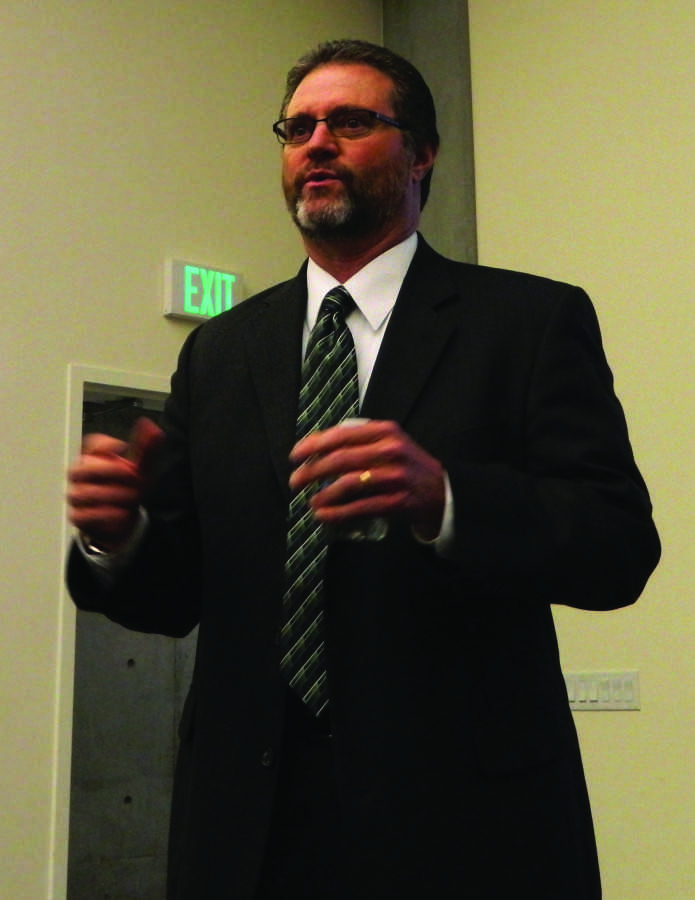 Dr. Beebe will continue at City College with his policy of holding open office hours, just as any other professor would. He prefers the “walk and talk,” as he calls it. Photo credit: Christopher Handloser

From growing up wanting to be a firefighter to becoming the new president of San Diego City College, Dr. Anthony Beebe’s path has been one of enlightenment through education.

Since 2006, Beebe, 57, has been president of the San Diego Community College District’s (SDCCD) Continuing Education, a system serving 3,600 non-credit students across seven campuses. It is the largest accredited, post-secondary institution of its kind in the US.

He gave a wide-ranging interview days after being selected president and said he will bring to City a plan with four basic elements: social justice (student equity), access and completion, transitioning adult students to higher levels and making connections with the community.

“I have a specific vision for City College that I want to invite students, faculty, staff and administrators to contemplate,” said Beebe. “In the short run, what I really need to be able to do is listen and understand what the concerns are of everyone.”

He is wasting no time in accomplishing that goal.

Drawing from his extensive training in deliberative democracy, Beebe sent out a questionnaire to City faculty, staff and students asking, “If only I were the new City College president…what would I do?”

“I think that it engenders a sincere, genuine interest in me learning from them before I’m even there,” explained Beebe.

It also impressed Associated Students Government President Carolina Moreno, and Beebe met her response to the questionnaire with great appreciation.

“Little things like that where someone acknowledges your feedback and your perspective, that says something about the person, taking that time,” said Moreno. “I see that as a great quality.”

In addition to people learning about him, however, the exercise has also shed light on some of the intricacies of City College.

“Frankly, and this could be a misconception on my part, but what I’ve perceived so far from the information that I’ve gathered, and I understand that it’s a very limited sampling, it seems like we have some marvelous and amazing things happening in pockets all around City, but I’m not seeing any overarching coordination of those things,” expressed Beebe.

So he’s catching on quickly.

He is also planning to hold open office hours, just as professors do, and looks forward to having “walk and talks” with anyone who needs an ear.

He says that his goal is to work with the student body to figure out what things are getting in their way when interfacing with the college. It’s in overcoming these barriers that the experience is enriched, ultimately achieving their goal as educators.

“I think there are so many students out there that are just not interested, not inspired. They don’t see the relevance of it. That’s why I think it’s important for us in community colleges to make that connection to students, and our faculty are really good with that,” Beebe said, adding that City’s classified staff excels in this area as well.

As for the programs at City, he is quick to note that the college’s transfer and general education programs are a definite strength, stating, “It doesn’t matter what your major is, if you don’t have those foundational elements, you’re not going to make it.”

But the vision becomes more interesting from there.

In highlighting programs such as Peace Studies, Urban Farming and Labor Studies, Beebe believes that City College can embark on a national marketing swing. He is intrigued by the concept of magnate schools like San Diego’s High Tech High and the various health care high schools popping up.

“I was thinking to myself, why don’t we be a magnate college? We need to bolster our enrollments, and there are a lot of strategies we can use, but one of them would be marketing ourselves on a nationwide basis and drawing people that have the same interests and passions (as City),” said Beebe. “We don’t normally think like that.”

A high school basketball player, Beebe also sees value in connecting faculty from inside and outside the Athletics program, stating, “There’s some bridging that needs to happen across Park Boulevard.”

He added that he hopes faculty will say to themselves, “We need to support Athletics and make sure (the program) is successful, because even though I’m an English teacher, it ties to my mission of trying to get these students through the program.”

The process that he had to endure to get the position was an earnest one.

Beebe explained that City has never held public deliberation forums for president before and that Chancellor Constance Carroll admitted that his journey was akin to her hiring as the district’s top administrator.

“The process that I went through was one of the most rigorous, arduous processes that any president has gone through in this district,” Beebe said.

In the statement announcing Beebe’s appointment, Carroll underscored his achievements.

“Anthony Beebe brings extraordinary qualifications to the position of president of City College. He has transformed the Continuing Education division into what one important government agency described as the best in the state.”

“Above all, he is deeply committed to students and their achievement,” added Carroll.