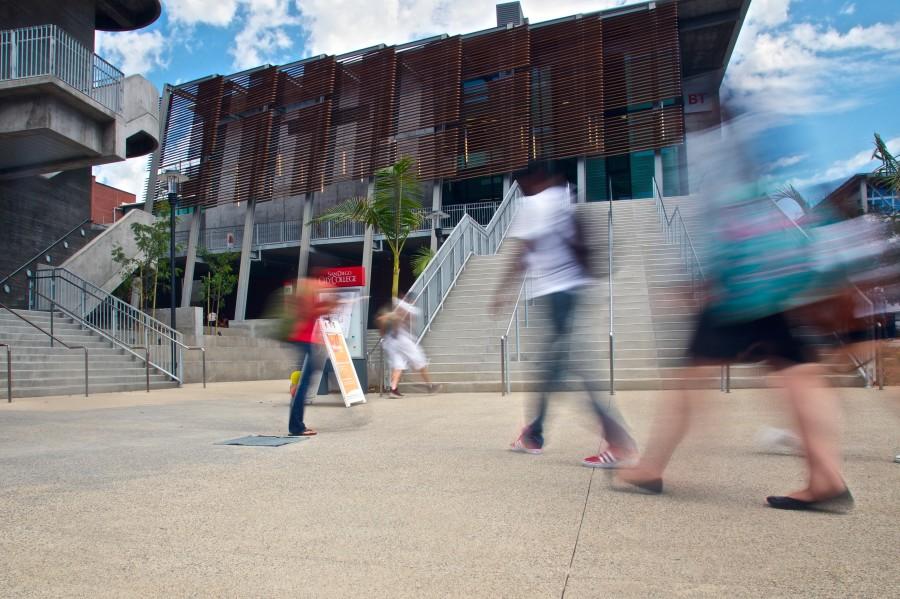 City College’s Arts and Humanities and Business Technology buildings officially opened their doors to students Aug. 18 with much fanfare. The buildings grant their respective programs the space and technology to provide their students with an increased level of education.

“Consider that last year, if you were to go to the IT center, sometimes the machines were 8 years old. We teach network engineering, computer science, the programming part of it. This is a new beginning,” said Rose LaMuraglia, dean of the School of Business and Information Technology and Cosmetology. “Now that we have something that actually would be the envy of some folks, we have a chance to give students access to what is current, and it’s very important.”

With an official completion date of Aug. 16, the Saturday before the semester started, some were concerned if contractors and support staff could have things ready by the start of the term.

“We were cutting it close,” said Trudy Gerald, dean of the School of Arts, Humanities, Communications and Telecommunications. “As of last week, we were still getting the classrooms together, there was still fencing around the building, we cut it very close, but I must say that on Monday morning the classes were operating, the students were in their rooms and the teachers were teaching. We’re Happy.”

It is true that the buildings are being well received, though it cannot be ignored that some aspects of the facilities aren’t up to speed. “The Mailbox,” or Student Commons, is waiting for benches and casework to be installed.

“They are custom fabricated, and we expect to get them within the next 2-4 weeks,” Thomas J. Fine, campus project manager, said in an email. “There are some finishing touches like hand rails, exterior gates and exterior cleaning, which are taking place over the next two weeks.”

While most rooms are sorted out and fully operational, some classes in the BT building are waiting on supplies or equipment. Some labs are even without functioning computers, a deficit which should be remedied in the coming weeks.

“When you move in, not everything is ready,” LaMuraglia added.

The vendors that supplied the computers to the BT building delivered them within the last two weeks and it takes time to test the computers and ensure that they will function properly. Even with the issues, optimism is high in the program.

“Considering that this building has over 350 computers, we are doing very well,” she said.

With the opening of the Arts and Humanities and Business Technology buildings, City College, which celebrates its 100th year in 2014, is competing not just with community colleges but four-year universities in the quality of education, and access to current technologies.