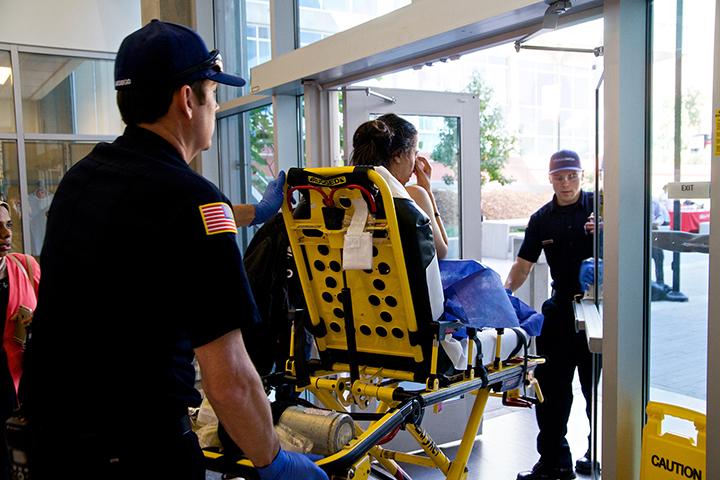 A 19-year-old female student is wheeled out of MS building by paramedics following an assault on Oct. 9. Photo credit: Troy Orem

A 19-year-old female student was attacked on the third floor of the MS building on the City College campus Thursday, Oct. 9.

According to witnesses and authorities, at 11:10 a.m. on Thursday, the unnamed 54-year-old male suspect approached the student and tried to take her bag by force. When the student refused to give up her belongings, the suspect shoved her against a concrete wall. According to some witnesses, the man also punched her in the face twice.

“I was in my office and I heard him say ‘Get up! Get up!’ and he was grabbing her by the hair,” said math Professor Brenda Gaipa, whose third-floor office window directly faced the crime scene. “That’s when I immediately called 911 and by then I saw him take off.”

The suspect then proceeded to take the bag and run down the outside stairwell into the street to make an attempted escape.

A group of possibly 10 students who witnessed the attack chased the suspect around from the MS plaza to the bottom of a stairwell in the southwest corner of the MS parking garage.

“He ran and a bunch of people followed him, then he went down the stairwell, so I got on the phone and called 911,” said Rio Bonds, a 27-year-old student at City.

“He went around and was stabbing at the people who were chasing him, with like, a knife,” Bonds said.

Officially, there has been no mention from the police as to a weapon, but witnesses reported seeing a knife. Some news outlets have said the weapon was a screwdriver, but authorities have not confirmed what the reported weapon was.

Right as the attacker and the witnesses got to the stairwell, campus and city police arrived and drew their guns on the suspected attacker. The suspect then surrendered.

The bloodied student was wheeled out by medics and was taken to UCSD Medical Center to be treated for non-life-threatening injuries. A college district news release did not specify which of the two locations it was, Hillcrest or La Jolla.

According to a statement sent out by San Diego City College District spokesman Jack Brersford the suspect is a student. Classes in the MS building where the incident took place are continuing as scheduled.