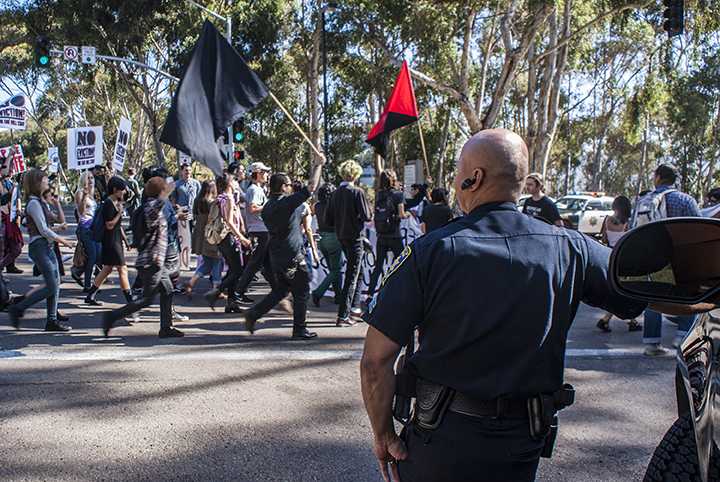 For the past 34 years, the Ché Café has been an autonomous arts and music venue for UCSD students and non-students who seek to organize and share creative ideas in the same unfiltered space.

This year, UCSD issued a report to the cafe necessitating more repairs using an estimated cost — a cost that the cafe volunteers claim to be “astronomically inflated” — while refusing to allocate funding and instead have begun seeking to shut down the cafe, which the San Diego County Court has upheld on behalf of UCSD.

“We’re hoping to transmit our message to the UCSD chancellor (Pradeep Khosla) that it should not be the administrators deciding the fate of the collective here, because they have not had the time to go over what the students’ thoughts are on the space,” said Rene Vera, one of the venue’s head volunteers.

Vera was also leading the march on Oct. 28. “If they do, we believe they will generally support the space because through talking to UCSD students, we’ve realized that there is a lot of student support for the Ché Café,” Vera said.

“There’s not a lot of spaces on campus for students to freely organize and to create music and to host events and to learn the way they do here at the Ché Café,” Vera explained. “Where we operate on a non-hierarchal collective model where there’s no bosses nor managers, but there are leaders who have taken more responsibility in an attempt to keep this space organized.”

Leading the front of the protest alongside Vera, Mauro Chavez carried the thick stack of petitions collected over the past summer to keep the cafe open. The huge stack of petition pages contained roughly 13,000 signatures, all to be delivered to Khosla’s office on campus.

“We know that the Ché Cafe’s reach has been worldwide,” Rene said. “These signatures have come internationally from Europe and Latin America, from (UC) faculty and alumni, from grads and union workers; they’ve come from literally people of all walks of life, because that’s how far reaching our space is.”

The march of between 50 to 70 volunteers and supporters started at 10:30 a.m at the Ché Café, and walked straight into the heart of the campus.

Many students were out and about throughout campus that day walking between classes or shopping around the flea markets, providing a perfect opportunity for protestors to gain attention.

Upon arrival at Khosla’s office, standing out front was Brooks Williamson, communications director for the UCSD chancellor’s office.

“I will accept these and make sure the chancellor receives these as soon as he gets back,” Williamson said as she was handed the stack of signatures from Vera and Chavez.

Williamson claimed not to have access to Khosla’s calendar and could not give the protesters an exact time to expect a response back from him.

“This week,” all the protestors shouted repeatedly while Vera and Chavez gave their contact information to Williamson.

“If we don’t hear back within one week, we’re all coming back,” Vera announced to the crowd as the stack of signatures was handed over.

The protesters then marched back to Scholars and Gilman Drives, where they momentarily blocked traffic before making their way back to the Che Café. Here the march concluded with open dialogue between student volunteers and supporters about further actions in order to keep the venue open.

“We’ve overcome many obstacles in our 34-year history to be here today,” Vera said. “We’re all inspired by the history and people who’ve put in thousands of hours to keep this space open. We will do everything within our ability to keep the space open.”