A new barrio for education 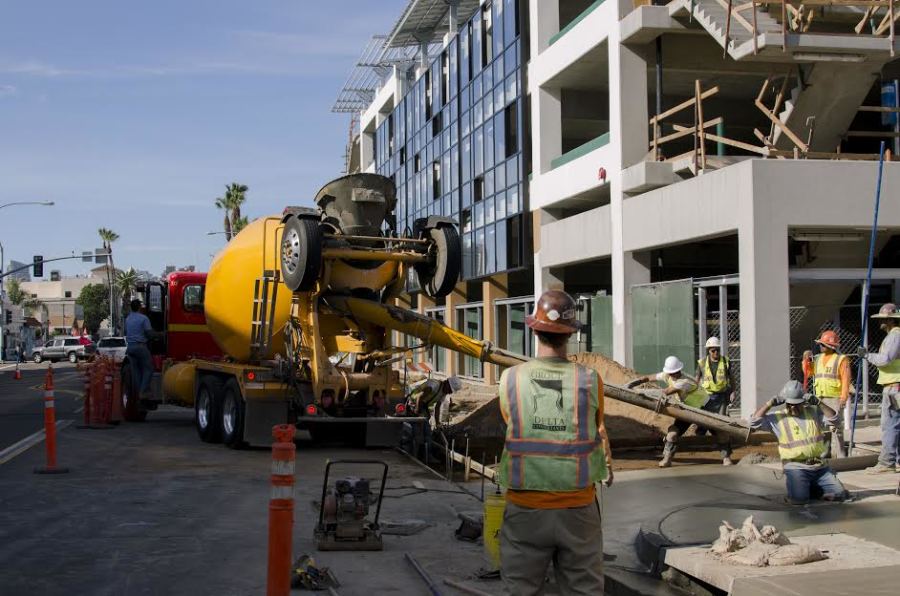 Construction for the new Cesar Chavez continuing education building is set to be completed in June. Photo credit: Richard Lomibao

Standing at the intersection of National Ave. and Cesar E. Chavez Prkwy. stands a new parking structure, the sun reflecting off the sparkly glass windows. Right next to it an old, brick building which will serve its last semester as the Cesar Chavez building — to be replaced with a shiny new one in June.

Dean Robin Carjaval of Allied Health and Community Education, both at the San Diego Continuing Education of Centre City and Cesar Chavez campuses, reacted to the anticipated new Cesar Chavez building with enthusiasm.

“It will begin to create greater connections, greater diversity, a greater familiarity for some really awesome historic things that exist in the community. Sometimes walking down the street I’ll see tourist from Europe who literally want to come see the murals in Chicano Park,” Carjaval said.

Oscar Cruz, a 25-year-old artist, grew up in the community and works across from the old brick building sees the new developments unfold.

“When I see these new buildings come along not only will you see a spur of new people coming in, different races.. you’ll see people with different levels of income. It’s going to change drastically like East Village.” Oscar explains.

Just a block away, the new Cesar Chavez building looks to be hitting its final stages of construction. With its 67,924 square foot facility, it will include “22 classrooms for vocational training, English as a Second Language (ESL), Adult Basic Education (ABE), high school equivalency preparation classes, Business Information Technology (BIT), Parent Education and Emeritus (age 55+) programs,” according to Proposition S.

An underground preferred parking level to accommodate 149 slots for carpools and high efficiency vehicles. While, the new parking structure down the street, will hold 320 spaces also to open spaces for the waterfront.

Changes are already rampant as new businesses are popping up along with implementing parking meters, something new to the community.

“Development always good but it’s just not good when it’s at the cost of the people that originally lived here being pushed out. Force to sell your home,” Cruz said.

Historically known as a Hispanic community Dean Carjaval and SDCCD wish to keep the culture alive.

“The parking structure is going to have 2 full walls that you can see from the street on Cesar Chavez Parkway and National Ave, will have murals representing cultural themes that the community has requested their desire to see,” Carjaval said.

As the new building remains fenced off turning heads of locals, newcomers are becoming intrigued.

“It’s going to be an opportunity that celebrates the redevelopment movement that is creeping southward in that it will bring new people into the community that would not necessarily find themselves traveling to that community,” Carjaval said.

Barrio Logan is set for the future to become what truly appears to be “the downtown extension.”

“There’s no hostility, no animosity, but you definitely do recognize and you see how the area has changed especially if you talk to another local they’ll tell you straight up,” Cruz said.