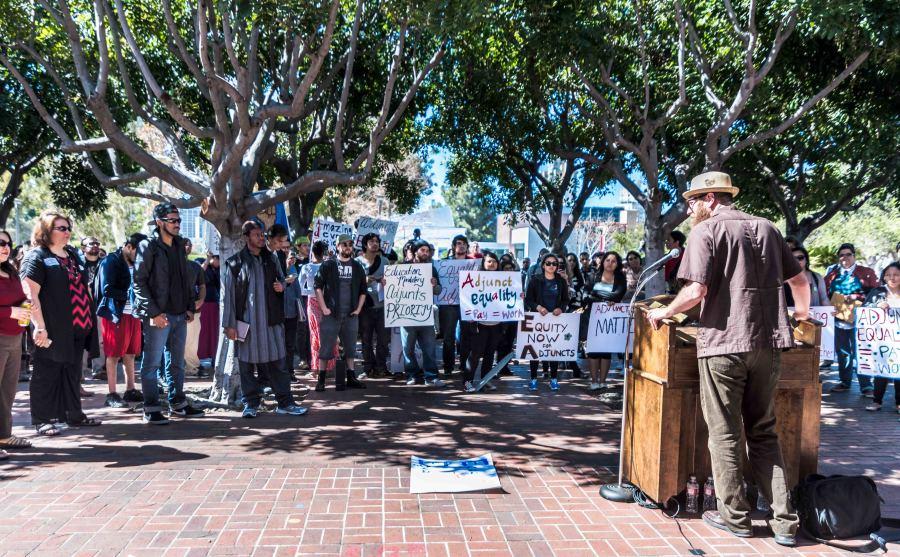 Adjunct professor Ian Duckles addresses students and staff gathered at Gorton Quad on Feb. 25 to raise awareness about the ongoing struggle of part-time teaching staff at community colleges and universities at the local and state level. Shrinking budgets have made it economically beneficial for schools to rely heavily on their adjunct faculty, who make less money and receive fewer benefits than their full-time counterparts Photo credit: Joe Kendall

More than 100 adjunct instructors and their supporters took another stand against inequality with a rally Feb. 25 at San Diego City College.

The rally was organized by Ian Duckles on behalf of Associated Federation of Teachers in San Diego, known as The Guild 1931; Jessica Thompson, professor of Philosophy at City College; Geoff Johnson, adjunct instructor of Humanities and John Hoskins, adjunct instructor of English, both at Mesa College, in order to bring more awareness to the plight of adjunct instructors at community colleges locally, statewide, and nationally.

“The whole southern California from the border to north county, there’s gonna be stuff going on in honor of this event,” Duckles said.

Duckles is also adjunct instructor of Philosophy and Religious Studies at Mesa College, San Diego Miramar College, Cuyamaca College and University of San Diego. Duckles is an example of a “freeway flier” – a term used for adjunct instructors who have to teach at multiple campuses to get enough hours to make a living wage.

National Adjunct Action Day was Feb. 25. The plan was for adjuncts to walk out.

“I know they are doing walkouts in other places. In California we’re not really focusing on so much on the walkout and we’re doing more informational stuff: tabling, teach-ins and things like that just because we feel that might be a better way to get the message out to our students rather than just kind of disappearing for the day,” Duckles said.

San Diego City College Students Laura Baeza and Mazyar Alamdari, community outreach interns for AFT The Guild 1931, manned a table with letters of support for passersby to sign that would be sent to Governor Brown. Baeza said they had collected over 400 signed letters over two days.

“Anything that has to do with social and economic justice, we’re always out there,” Baeza said. “…We’re tabling to get just as many letters as possible to Governor Brown to let him know that students really care about their professors and them not having full time jobs and benefits and office hours and stuff like that affects us,” Alamdari said as Baeza interjected “it’s affecting our education.”

Duckles was emcee and a speaker for the event. A few students spoke at the rally about their feelings about how adjuncts are treated and the impact it has on students.

Bo Elder, a grad student at San Diego State University on behalf of labor group Lucha Por $15 (the San Diego chapter of national labor group Fight for $15) spoke about economic inequality for minimum wage earners, pointing out that the value of minimum wage has decreased.

“We need a just economy in a just society that values the work of every single American.” Miller said in his closing remarks.

The final speaker was retired Professor and AFT 2121 member Joe Berry who taught at San Francisco City College and is the author of the book “Reclaiming the Ivory Tower: Organizing Adjuncts to Change Higher Education.”

Berry explained academic freedom and the deterioration of it on state funded campuses of higher education. He encouraged attendees of the rally to fight against it.

Berry’s general message was that adjuncts must unite in their fight for equality and job security and students must fight for their educational freedom.