Equipped with coffee and conversation 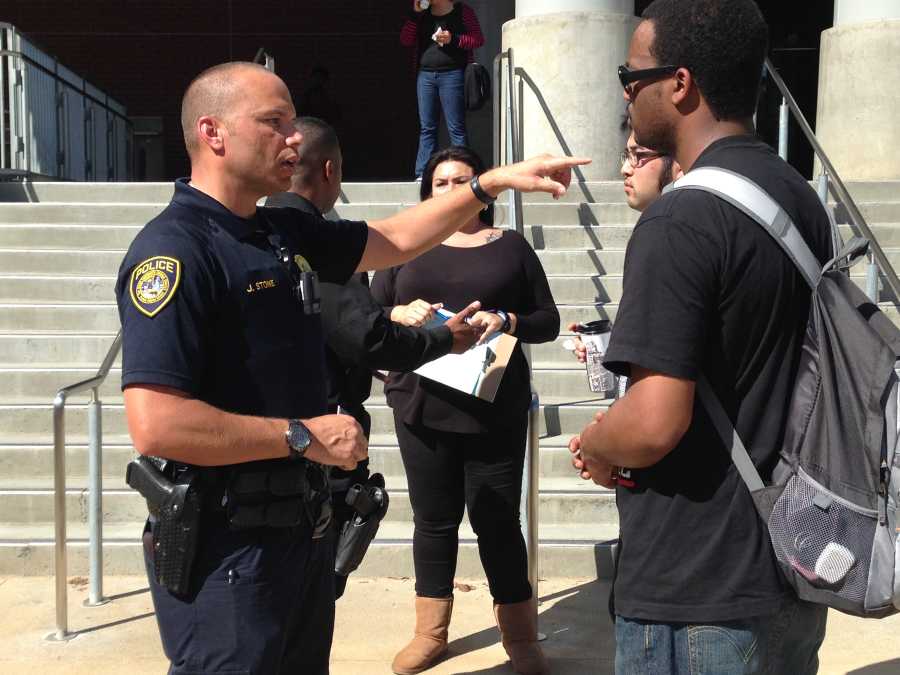 Officer J. Stone of the Campus Police department speaks with Umoja president Tony Givens about how to get in touch with officers during the Coffee With A Cop event March 12 in the BT/AH Quad. Photo credit: Angelica Wallingford

The San Diego Community College District Police Department shared smiles over cups of coffee with students for the fourth annual Coffee with a Cop event held on campus where students, staff and faculty were able to mix and mingle with the City College police on March 12.

Campus police handed out coffee and cookies and had their patrol cars on display with open doors at the student quad between the AH and BT buildings. At the event, held in conjunction as part of a nationwide effort, the police officers conducted a meet and greet to give people a chance to talk about public safety and other concerns.

“We’re out here to engage with people to answer any questions and to answer any concerns or fears they might have, and to let them know that we are here. You’ll be surprised, a lot of people don’t know there’s a police department for the campus,” said Raymund Aguirre, chief of police at the San Diego Community College District.

Campus Police Officer Jeff Rabine added, “It helps us be more approachable and it’s an opportunity to just say hi. When we’re working we talk to people for a reason, for investigating.”

The comfortable setting and interaction with officers helps people get to know their officers and with the recent sexual battery incident on campus, helps put students’ minds at ease.

“It’s a really good idea for them to put a face with their names and make them more approachable. I learned about the call boxes that they exist, where they’re located and how to use them,” said pre-nursing student Marisa Askren-Newman.

“It’s very serious crimes like the sexual battery, those types of crimes that we really seek to address immediately and that we need to pull out our resources together. Not only the police department but the whole campus,” Aguirre said.

Aguirre continued to mention the importance of these events and the natural awareness it creates by giving advice on how to prevent crimes, being alert of your surroundings and how to operate the emergency call boxes; which he confirmed are all in working order on the City campus.

“I feel it kind of breaks that barrier between cops and citizens, because sometimes we kind of forget them but in reality they‘re here to help us,” said Elise Baldwin, a student at City College who took the opportunity to approach campus police and share her opinions with the law enforcement.

The district police hopes the community notices its presence in order to reduce crime in the area and to strengthen relationships with the community.

“It’s a great way for students to talk with police officers in a non-threatening way and to learn about what they do to protect the campus 24-seven, 365 days,” commented Heidi Bunkowske, public information officer at City College.

For information about campus and district police, go online to http://police.sdccd.edu/.