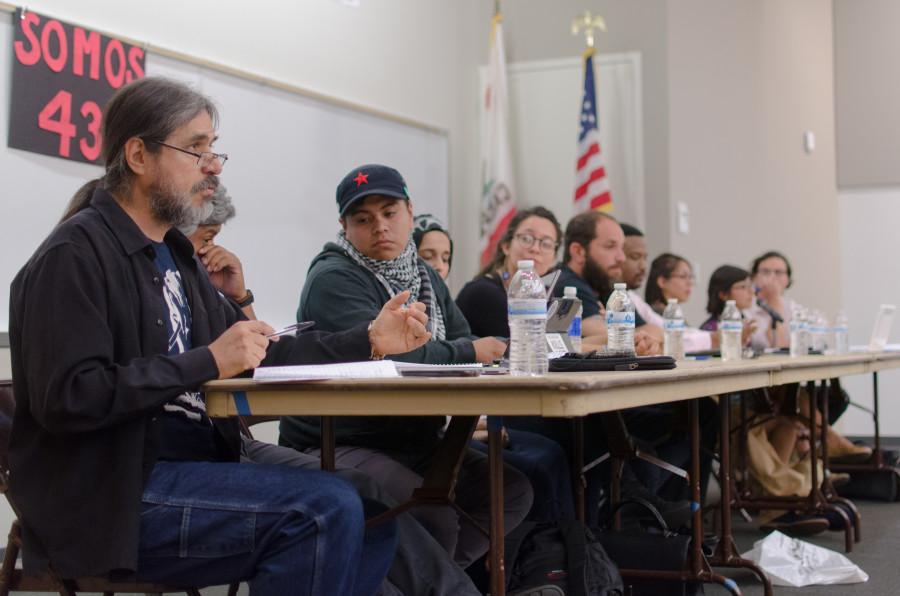 Students from the support movement for Ayotzinapa, Mexico, expand on types of changes in an open forum on March 26 in building V-101. The panel expands and diversifies with those representing similar causes, such as, topics arising in Palestine and American Black culture. Photo credit: Richard Lomibao

Mayra Almaraz tearfully recounted how her ex-boyfriend is serving a life sentence for a botched robbery due to the three strikes law. Almaraz shared her story in MS-462 during the afternoon session of the second day of the first Social Justice and Education Conference held at San Diego City College on March 26 and 27.

Attendees were asked to get into groups of four to six and each member of a group to state what they are passionate about in society to illustrate the power of conversation to bring about social justice.

During a brief sit-down with City College President Anthony Beebe, he expressed what he wanted attendees of the conference to get from it — to know that City College is a national leader of social justice, social justice is not political or economic, and to help define social justice as a unified idea to positively impact the communities of City College and San Diego.

Each day of the conference opened with registration and self-serve breakfast outside the Saville Theatre. Registration consisted of attendees going to the tables set up in front of the theater and once their name was confirmed, they were given a bag with programs and end of conference surveys.

Thursday, the conference opened with a ritual led by Erin Charlens, a member of the Umoja Governing Board, and Ernie McCray, a poet, activist and retired principal of the San Diego Unified School District. Beebe welcomed attendees and Constance Carroll, chancellor of San Diego Community College District, was the featured speaker.

On the second day, the topics of poverty and racial inequality in the educational system were presented by featured speaker Tyrone Howard.

Howard is the faculty director of Center X, the founder and director of the Black Institute, and professor of education at the Graduate School of Education and Information Studies at UCLA. He has written various works on the topic, such as “Why Race and Culture Matters in Schools: Closing the Achievement Gap in America’s Classrooms,” and “Race, Ethnicity, & Education.”

He compared community colleges with his home school, UCLA, and claimed that UCLA is not representative of the city of Los Angeles nor the entire state of California.

Howard demanded that the audience take a look at our institutions. He posed the argument that the same institutions that often claim to help sometimes create the obstacles themselves.

“We need to recognize that poverty matters,” Howard said.

According to the statistics he presented during his presentation, 50 million people living in the U.S. live in poverty and 16.5 million of those in poverty are children.

Of those children who live in poverty, he argued, most of them are more likely to not attend preschool, attend low performing schools and perform worse in school and drop out of high school.

“Certain schools feel like prison,” he said. “It sends a powerful message that we don’t care about you,” he argued. He later went on to compare those impoverished institutions to schools in wealthy communities to make a visual statement of the wealth inequality in those institutions.

He continued his presentation, talking about race in the educational system.

“If educators aren’t going to have real honest, sustained critical conversations about race we are going to continue to see the kind of gap we see between African-American and Latino students,’’

Howard explained. “Our series of studies that we’ve done where we have seen schools that have closed the achievement gap, one of the crucial things that they’ve done in these schools is that they’ve taught very delivery about race.” Howard reached the end of his speech by presenting his call for action: “What we need is transformative social justice education.”

He argued that although the obstacles are set by our institutions it does not mean it should stop youths from educating themselves and that it’s important to “reclaim sense of self.”

“Believe it or not, he’s actually gone through a lot. I mean he grew up in South Central L.A., he knew how everything was like, so at least we have someone who lived to tell about it,” Miramar College student and audience member Harris Bhatti said, sharing his insight on the speech and Social Conference overall.

The conference concluded with a visit to Tijuana’s maquiladoras to learn the actual conditions and struggles of workers.