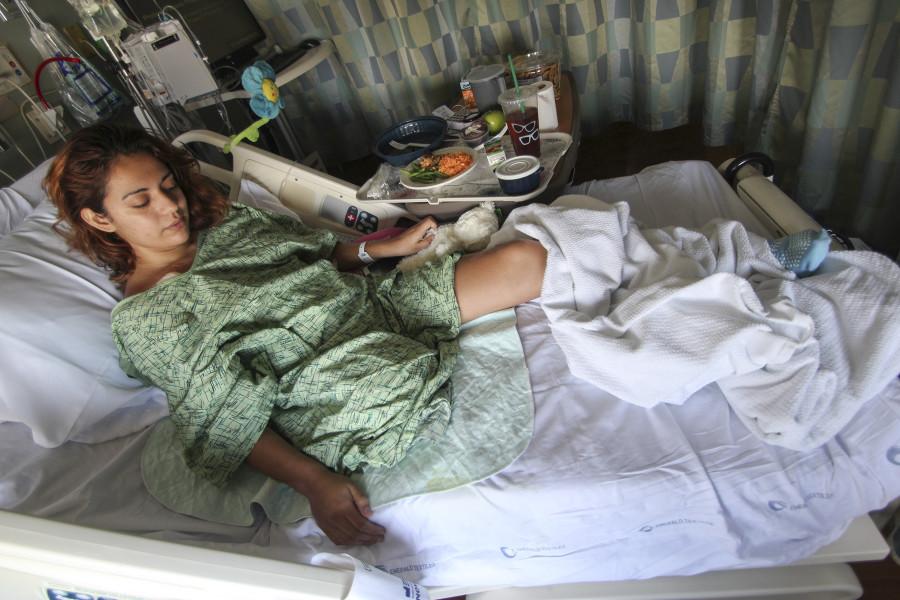 “… We were going fast through the Carretera Tulum, then the motorcycle started moving around and that is when we flew (off),” explained Zaphire Alonso, a San Diego City College student who was absent during the first two weeks of school, with more than a legitimate excuse.

On Aug. 11, Alonso and her friend Cristalmar Palencia took a trip down to Cancun, Mexico, to celebrate passing all of their summer classes at City College with As. The two enjoyed one last escapade before the start of the fall semester. Their social media accounts depicted vacation photos and updates of them hiking, kayaking, practicing yoga, dancing and riding motorcycles.

On Aug. 16, Alonso remembered getting on the back of a street bike with her cousin’s friend, Vladimir, and that he accelerated to 120 mph. Vladimir barely missed two taxis parked, when he had lost control.

Within approximately five minutes, Alonso could hear the ambulance coming to transport them to Hospital General de Playa del Carmen.

“… (They needed to operate) right away because my leg was completely broken including the ligaments, they couldn’t do anything, I was bleeding out too,” and when she overheard the doctors planning to amputate her leg, she calmly said, “Just do whatever you want. (Even though) I was still in shock, I was so over it.”

“It’s been a year since I met you … we’ve been through a lot of happy moments, but now we have to go through sad moments,” Palencia posted on her Facebook account.

“The accident was on Friday, and then I woke up on Saturday in the afternoon,” Alonso said.

The buzz of the accident hit back home in San Diego and Tijuana. Alonso’s mom, Dora Elena Duarte, and Alonso’s boyfriend, Bernardo Machado, immediately flew down from Tijuana to be by her side.

Lexi Martinez, Zaphire’s friend back home, was worried about her friend’s well-being, and the expenses that would accrue. On Aug. 18, Martinez set up a GoFundMe account to “Bring Zaphire Home.” (Update: As of Sept. 29 the GoFundMe account is inactive.)

Martinez and Alonso have been backing-up one another since they were sophomores in high school, four years ago. “… And for two years, we did a 200-mile relay race called ‘(the) Ragnar’ from Huntington Beach to Seaport Village,” Martinez said.

No matter the 2,700-plus-mile distance between the two City College students, one always picked up pace after the pass of the baton, where the other had fallen behind.

“… We did have some (travel) insurance for the trip traveling into Mexico. This covered my ambulance ride from the hospital (General de Playa del Carmen) to the other hospital in Cancun, and my mother’s hotel room,” Alonso said. She also said that her insurance in the U.S. could not cover her medical expenses abroad.

“As you might imagine, everyone is in mourning, but right now is the time to act and help Zaphire. We are asking for donations to fund her medical care and eventual transfer home to San Diego, as soon as she is well enough to travel. Zaphire will need an additional surgery, physical therapy and a prosthetic, so we can get her back to the life she loves,” reads the GoFundMe campaign.

Thanks to Martinez’s “visual pass,” her GoFundMe campaign received a total U.S. dollar amount of $16,883 raised by 211 people in 25 days.

On Sept. 7, the campaign, which had already gone viral, attracted various media outlets that awaited Alonso’s arrival outside of the University of California, San Diego Hospital in Hillcrest. On the NBC 7 San Diego news, a video of an upbeat and grateful Alonso being pushed in a wheelchair was shown.

“… I want to pay them back (Monarch High School),” said Alonso, “none of the money is going back to me.”

Monarch High School is where Alonso graduated with a “3.8-3.9 GPA,” which helped garnish her a Price Scholarship to help pay for her education at City College. Alonso wants to transfer to San Diego State University and obtain her degree to help her become a social worker.

This fall semester, Alonso was going to take English, math, sociology and another class to give her 14-15 units, but she doesn’t know for sure how long her recuperation process will take to enable her return to campus. During a recent City Times interview, she was optimistic as she awaited a surgery on her pelvis.

“I don’t see (anything) bad. I see something positive. The best thing is that I am alive,” Alonso said.