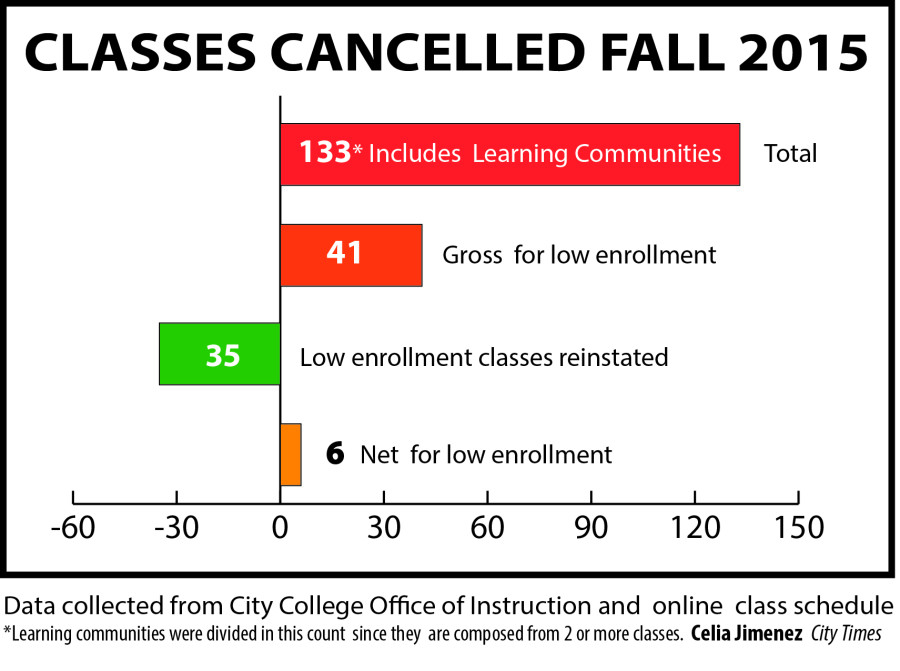 Data collected from City College's Office of Instruction and online class schedule. Learning communities were divided in this count since they are composed from two or more classes. Photo credit: Celia Jimenez

San Diego City College faculty and students were dismayed as the fall semester started with the cancellation of 41 classes. The ensuing backlash persists.

Administration issued the blanket statement that classes were cancelled due to low student enrollments. Some faculty has countered that low enrollments were not cut and dry since a lot of students in their programs historically got add codes during the first two weeks of classes.

During the first Academic Senate meeting of the semester Sept. 14, the topic of class cancellations was discussed at length and garnered many comments from instructors who were present.

Thomas Davies, instructor for Air Conditioning, Refrigeration, and Environmental Control Technology, said: “Our Solar Energy class was cancelled and, you know, if there’s anything that’s crucial to our economy right now, it’s solar energy.” Davies went on to say that lack of access to student emails impacted his class enrollments and an adjunct instructor got bumped as a direct result of Davies’ class being cancelled.

Other instructors at the Academic Senate meeting shared their experiences of classes being cancelled in their departments, as well.

At the crux of instructors’ frustration is that cancellation of classes due to low enrollments is impacted by a minimum enrollment number requirement of 18 students to keep a class alive. This was shared in a letter Co-Chair of Visual and Performing Arts Katie Rodda wrote and read to the Academic Senate attendants.

Rodda also included these points in the letter: the cancellation of classes too close to the start of the semester; the administrative requirement to meet the full class capacity number of 35 registered students and a minimum of registered students being 18 (35 rounded up to 36 and divided by 2 that equals 50 percent full); a lack of time to recruit students to fill classes; and an inability to reach out to previous students since student emails and rosters disappear when semester-end grades are submitted and faculty cannot access wait-listed students until the first day of classes. Adjunct faculty jobs on campus are compromised if they don’t have classes to teach, while they may still lose work because full-time faculty need classes to teach to fulfill their employment contracts. Some classes were cancelled Monday of the second week of classes before 18 students could enter add codes that would have saved the class with 50 percent capacity being met. With Visual and Performing Arts classes being in a temporary location, it negatively impacts student enrollment numbers of students.

Rodda expressed that she and the department believe administration does not support the Visual and Performing Arts program. She closed her letter stating: “We ask that the Academic Senate support us in our quest to rebuild our programs. Help us fight against the mandated cap of 35,” Rodda said. “Our contract and adjunct faculty are dedicated, caring professionals in their fields. We want to serve our students, but we are finding it increasingly difficult to do so. City College’s Mission Statement claims its highest priority is student learning and achievement. We pride ourselves on meeting the diverse and cultural needs of the students. We are in fear of the Visual and Performing Arts disappearing entirely from this campus, which runs completely counter to City’s goals and mission.” Enthusiastic applause from those present followed.

In interviews with administration, they clarified their blanket statement.

City College President Anthony Beebe explained more in depth that class cancellations boil down to an economic issue, which is only a part of enrollment management that he calls a “balancing act.”

“What we are trying to accomplish with enrollment management is be able to accommodate students,” Beebe said.

He further explained that funding, or lack thereof, makes it challenging to move students from wait lists to being registered for a class. Add to that the fact that some classes are not as interesting to students, so they don’t fill.

As described by Beebe, the state of California has a formula that determines how it funds City College, for example. Approximately 15,500 students are enrolled this semester according to Renee Kilmer, interim vice president of instruction.

The numbers would look like this as an example: 17,000 students from College X are enrolled for the semester. 13,000 students are full-time multiplied by $4,500, per student, which would equal $58,500,000. The remaining 4,000 students are part-time and must be condensed to make full-time status bearing students, so the full-time equivalency may be 2,500 “full time students” multiplied by $4,500 per student, and that equals $11,250,000 added to $58,500,000, which equals $69,750,000 for the academic year. From that total is deducted teachers’ salaries, overhead costs and supplies for classrooms, and other necessary line items to teach classes.

The funding model the state uses pays schools for students enrolled at full-time status (at 15 units) is old, according to Kilmer.

Kilmer also stated the the 41 cancelled classes on campus were only due to low enrollment, although classes may be cancelled due to other circumstances. She also stated that 35 of the 41 classes were reinstated at the time of an interview Sept. 18.