A memory honored by candlelight 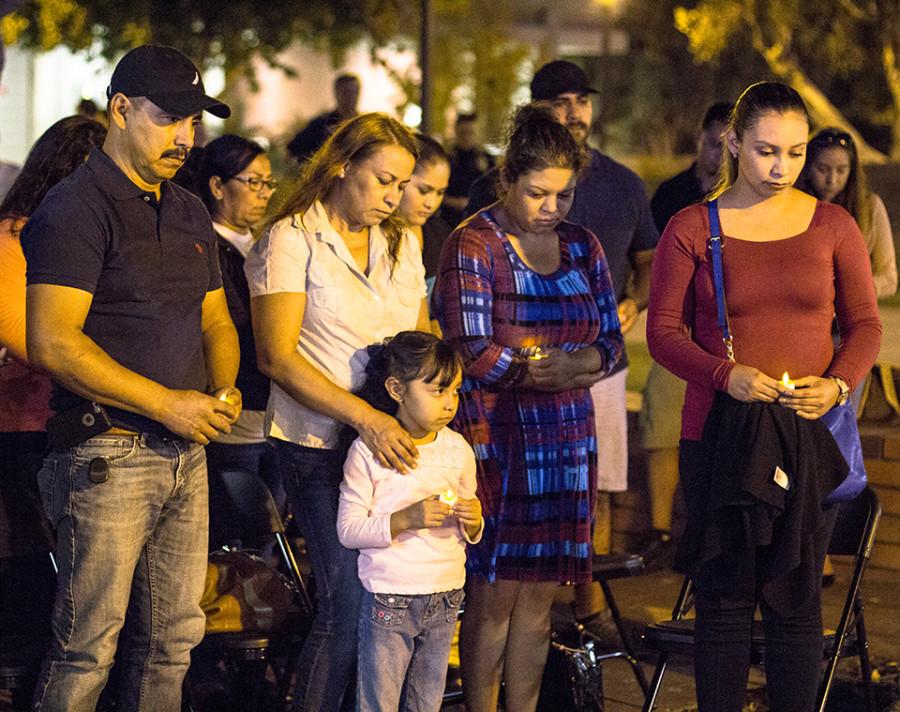 The family of Diana Gonzalez gathers with San Diego City College students, faculty and staff for a candlelight vigil, put together by the Visionary Feminists Club, in Gorton Quad on Oct. 15 to honor the Gonzalez’s memory on the fifth anniversary of her death. Photo credit: Celia Jimenez

It has been five years since Diana Gonzalez’s death and the Visionary Feminists club at San Diego City College hosted a candlelight vigil in her honor. The vigil was held on Oct. 15 to uphold her memory as well as bring awareness of domestic violence.

According to a City Times article from 2014, three weeks prior to Gonzalez’s untimely death, a police report was filed accusing her estranged husband, Armando Gabriel Perez, of kidnapping her from Balboa Park and holding her hostage for two days. Allegedly, Perez assaulted, raped and imprisoned Gonzalez before releasing her on Sept. 23, 2010.

Perez had been waiting hidden by trees for Gonzalez to leave her night class when he dragged Gonzalez into a men’s restroom on campus and not only repeatedly stabbed her, but scarred her by slicing a vulgar word into her back on Oct. 12, 2010.

Perez acted as his own attorney and plead guilty on Nov. 24, 2014. He then received life without the possibility of parole plus one year on Jan. 16 after San Diego Superior Court Judge Charles Rogers denied motions to withdraw his guilty plea to not guilty by reason of insanity, according to Feb. 3 City Times article.

Members of the Visionary Feminists Club spoke about the importance of understanding that domestic violence happens. It occurs so often, every nine seconds a woman is assaulted in the U.S., according to statistics provided by the Visionary Feminists Club. One in four women are subjected to abuse and the ages range from 18 to 34. One in five women are assaulted while attending college. It was important for people to understand how much this issue affects people on campus.

Gonzalez’s sister spoke a few words in remembrance, saying, “She was a good sister. She was studying to be a nurse. I still remember her long hair, her pretty nails … playing with my niece and daughter.”

Gonzalez’s family weren’t the only ones who felt the weight of losing her. City College President Anthony Beebe also had a few words to say about Gonzalez.

“She was a good girl. She didn’t smoke, didn’t drink. Typical 19-year-old student trying to do good with her life,” Beebe said.

“With the shooting that took place in Roseburg, Oregon, last week … my emotions are absolutely raw,” Beebe continued. “This is so important for us to do.”

Beebe also stressed how important it is to be aware of domestic abuse so another tragedy can be prevented.

“When we know about these kinds of things we need to help. It is our responsibility. We can use this tragedy as an inspiration to move forward,” Beebe said.

Estrella Lopez, member of the Visionary Feminist club, discussed the possibility of creating a mural not only for Gonzalez but for all the women who have been victims of patriarchal violence. The idea of the mural first came about in 2013.

“The intent behind the mural is to bring awareness to violence against women,” Lopez said.

Gonzalez’s daughter also participated in the painting of the mural.

Lopez explained how the problem with domestic violence is how it is believed to be an issue that those who are going through have to go through it alone. Lopez also expressed that there are also options for those who have been perpetrators of abuse.

The mural will be used to recognize violence and help those at City College to understand it goes beyond the campus.

“Art is transformative,” Lopez said. “To have this tragedy happen on our campus and to only have a Title 9 website means we need to do more. With this mural, it shows this is happening beyond City College,” Lopez said.

Currently, the Visionary Feminists Club is working on a request for the mural through the art community.