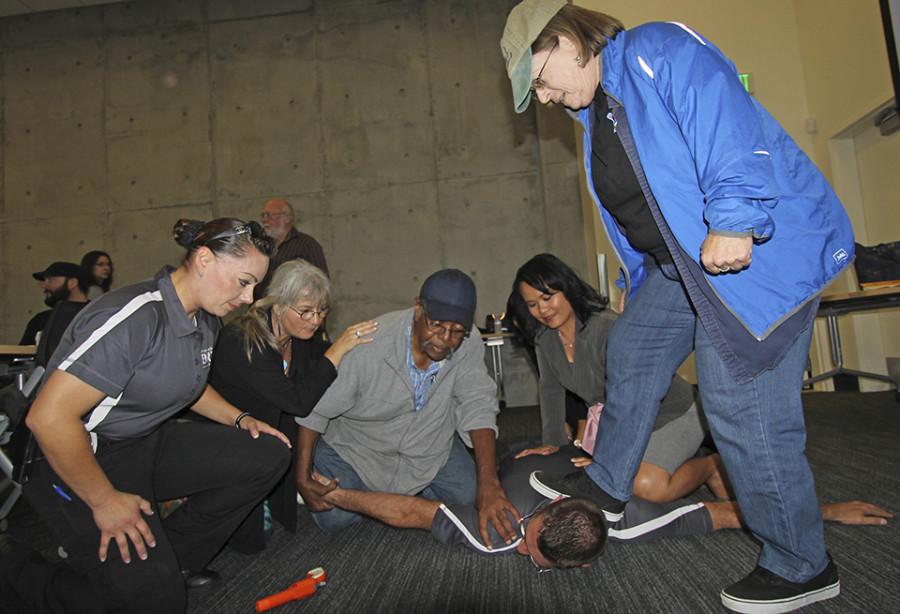 “Every single shooter had an accuracy rate of 50 percent, now we have trained police officers and snipers and they (sometimes) can’t make it 50 percent,” explained Sheila Herron Fox, a City College Police Dispatch supervisor.

Fox was referring to the chart on page three of the ALICE Training paperwork that she handed out earlier in the afternoon of Oct. 22. The chart listed the Columbine, Virginia Tech and the Sandy Hook school killings, followed by statistics.

“The active shooters are now going in,” Fox said. “They know they have about 10 minutes, although the police response is usually between five and seven minutes, you have to figure out how to protect yourself and the people around you, for 10 minutes.”

Fox knows this too well. She has been training and supervising dispatchers for 21 years in Homeland Security issues for first responders, private security and citizen groups.

The ALICE Training program was originally slated for January 2016, but following the Oct. 1 shootings at Umpqua Community College in Oregon, “We decided to move the training up as quickly as possible, and we focused on faculty, staff and administrators, because students are going to look to you for leadership in these type of critical incidents,” Richard Ferrell explained to the 35 plus attendees in MS-140.

ALICE is an acronym for alert, lockdown, inform, counter and evacuate.

Ferrell, a police officer with the San Diego Community College Police Department, has been instructing other police officers regionally and statewide on the topic of active shooter response for the last eight years.

“We chose ALICE because it’s been accepted by the Department of Education,” Fox explained.

The sooner the police get to the location, the better the chances are for survival. Alerting the police of the whereabouts of the shooter and victims that have been shot are of utmost importance, but informing others of what is learned in ALICE Training will be detrimental as well.

“Do not sit still, be active in your own survival,” said Alonzo Smith, a student service assistant in the counseling department who participated in the “counter-takedown” of Ferrell, during a demonstration with an orange toy gun.

The paperwork stated that, “Lockdown should be the first option if available, by locking the doors, barricading the door, covering the door-window, shutting the lights and hiding.”

If the doors do not lock, the door must be barricaded with heavy objects such as desks, cabinets and fixtures. Being creative helps too by using a tie or a belt to fasten a door shut, and disabling the hydraulic pump. All these elements will help buy time.

“You should only consider the counter suggestion if you are in immediate danger and have no other option. Lockdown and evacuation is always a better option,” stated the paperwork.

Regarding the 50 percent that Fox was referring to, it was because the victims were easier targets for the shooter, hence making the percentage higher.

“The ALICE concept changes that culture, by active participation in the barricading process and God forbid resistance if the shooter makes it into your room,” Ferrell said.