A day of crafty costumes, celebrating the dead and joining a new club 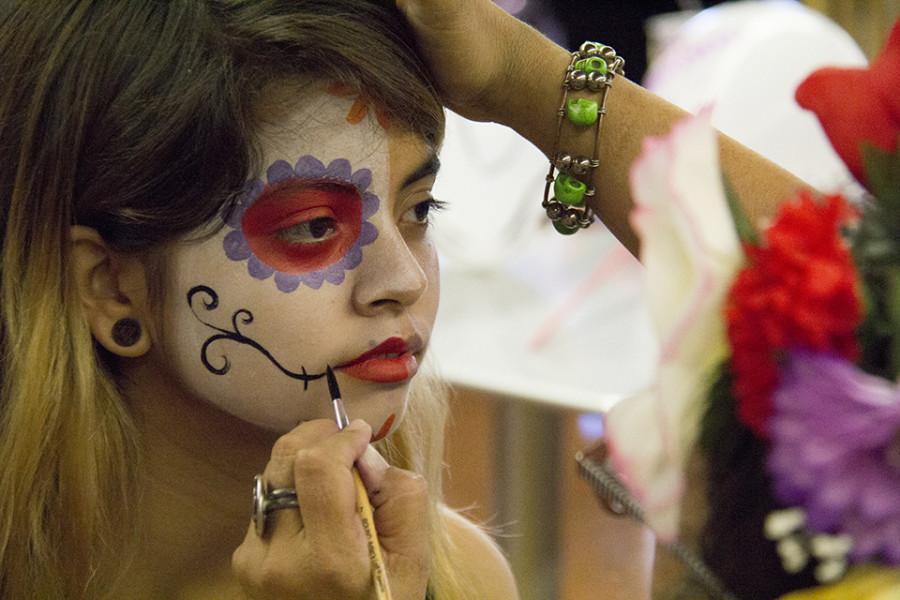 Students had the opportunity to get their faces painted in the cafeteria for the Day of the Dead celebration on Oct. 29. Photo credit: Celia Jimenez

The cafeteria was taken over by carefully crafted altars and outside by club stands as the Halloween Festival, Dia de los Muertos and Club Rush all took place in Gorton Quad on Oct. 29.

Women, children and students in costumes all gathered either in the cafeteria to take a walk along the altars or outside to take a look at the new clubs that were being promoted at Club Rush.

The Halloween Festival, hosted by the Associated Students Government, had a visit from Good Vibes, a promotional group that partnered with AT&T to help give out water and ice on the hot October day, as well as advertise the “AT&T Good Vibes TV Fest.” Attendees of the festival were given the chance to take a picture with a backdrop featuring the cast of “Pitch Perfect 2” and friends took turns holding a paper saw in their hands in the spirit of the “Ash vs. Evil Dead” television series. Radio station 94.9 FM blasted alternative tunes. There was sporadic screaming heard throughout the day for a chance to win either a free wallet or sunglasses. Screams were rated on an application and attendees were given their prizes.

Clubs that were in attendance included the San Diego City College Hip Hop Arts Society, a club recently created for artists looking to express themselves in a united environment. Students interested in challenging themselves and receiving scholarship and honors transfer opportunities should look into what the Honors Program has to offer. The Classified Senate was present to let students know they are there to listen to their concerns, opinions and questions on what occurs on campus.

The Creative Writing Club, another club recently established, wanted potential members to come join in poetry and open mic nights. The Chess Club had a long table assembled for anyone to join in. The City College Model United Nations Club plans to make a trip to come together with the main office in New York to discuss world peace. The PEERS program was there to support students in mental health issues such as stress and preventing suicide. The Transfer/Career Center was there to answer questions students had about taking the next step in their college careers.

A new organization appeared adjacent to the ASG and it was the African American Progressives. Jonathan Tucker III, who describes himself as a true progressive member, describes AAP as a way to unite those who believe in coming together and understanding the true meaning of loving one another.

Technology squeezed its way through the stands of Good Vibes by introducing a portable projector: the ZTE Spro 2 which will eventually be necessary to have in every classroom that works with wifi and Bluetooth.

Across from Gorton Quad, those who wanted to experience Dia de los Muertos got the chance to by getting their face painted, learning the history and admiring the detailed and colorful altars. Eduvijes Davis, secretary of the Anthropology Club, explained the aspects of Dia de los Muertos and what the altars consisted of. It is a celebration of the deceased and offerings are provided to help them on their journey. Food and water were included in the offerings. Salt was provided to ward off the evil that prevented them from continuing their journey.

“Enticing them to come spend time with their loved ones. It’s not really a mourning but a celebration of their lives,” Davis said.

The Halloween Festival ended with a balloon war that consisted of participants strapping balloons to their ankles while avoiding their own balloon from being stomped on. A costume contest was held and was conquered by Darwin Browne, who won first place as “The New Kid on the Block.”

“I love how many events go on here. It was nothing like where I went before,” Churape said.

For more information about clubs on campus, visit www.sdcity.edu.