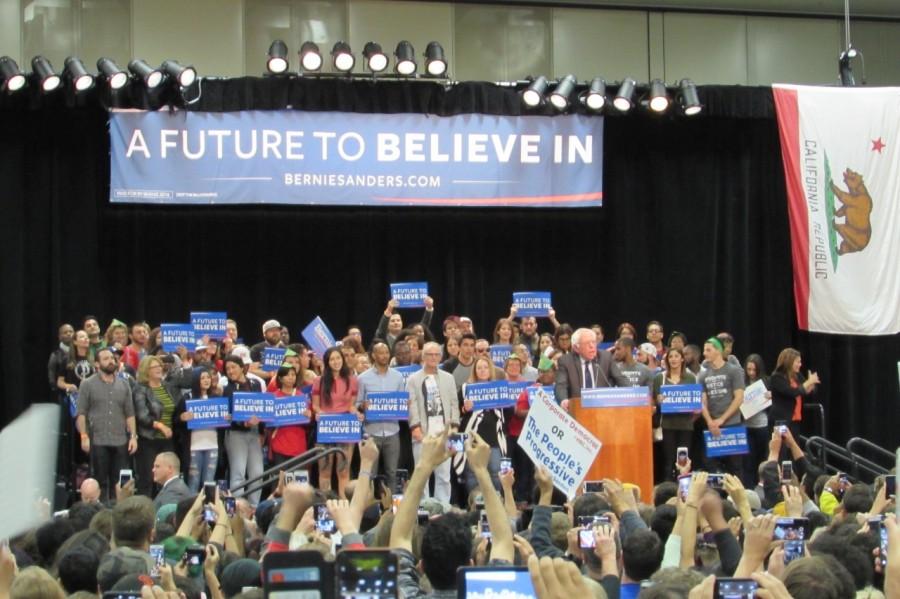 While waiting for the vote counts of Arizona, Idaho, and Utah to be finalized, Democratic presidential candidate Bernie Sanders campaigned in San Diego on Tuesday night.

“When we began this campaign we talked about the need for people to be involved in the political process. Tonight in Utah, Idaho and Arizona there are record braking turnouts,” he said.

At least 9,000 people attended his rally at the San Diego Convention Center, some who had been waiting in line since 9 a.m., legions of San Diego City College students.

Even after long hours of waiting, his  supporters gave the Senator a warm and energetic welcome.

“Understand how significant this is. You’re here because you’re talking to each other,” she told the crowd.

Sanders addressed the main points of his campaign, such as his call for free college tuition, increasing the minimum wage, increasing funding to public schools and addressing the wealth gap in the United States.

Carlos Gutierrez, TV and Film major at City College, spent his birthday at the rally. He was particularly interested in the candidate’s plan for free college tuition.

“I feel like it’s a really big improvement because we barely afford the rent or have money for food,” Gutierrez said.

“Who would do better for education than Bernie Sanders?,” Call asked.  “Free college? That should happen. Nothing would make our nation stronger, and more competitive in the world than free health-care and free college.”

Roberto Murillo, an English literature major at City, waited for three hours to hear the candidate.

“I’m here today because it’s a bit refreshing this day and age to get a politician that has integrity, that oozes honesty and is the kind of someone that can put a stop to all this money that is being put into our political system,” Murillo said.

The crowd responded warmly to Sanders’ call to increase wages for those earning the least.

“The wealthiest family in this country is paying wages that are so low that their employees need to get Medicaid and food stamps, and it’s the middle class taxes that pays for them,” said Sanders, referring to the Walton family, owners of Walmart.

“So I say to the Walton family, ‘Get off of welfare and pay your workers a decent amount!’”

By the end of the night Sanders had won the Idaho and Utah caucuses, gaining 35 more delages. However, his rival  Hillary Clinton won the Arizona primary, putting her at least 300 delegates ahead of him.