How to hook students to study chemistry? 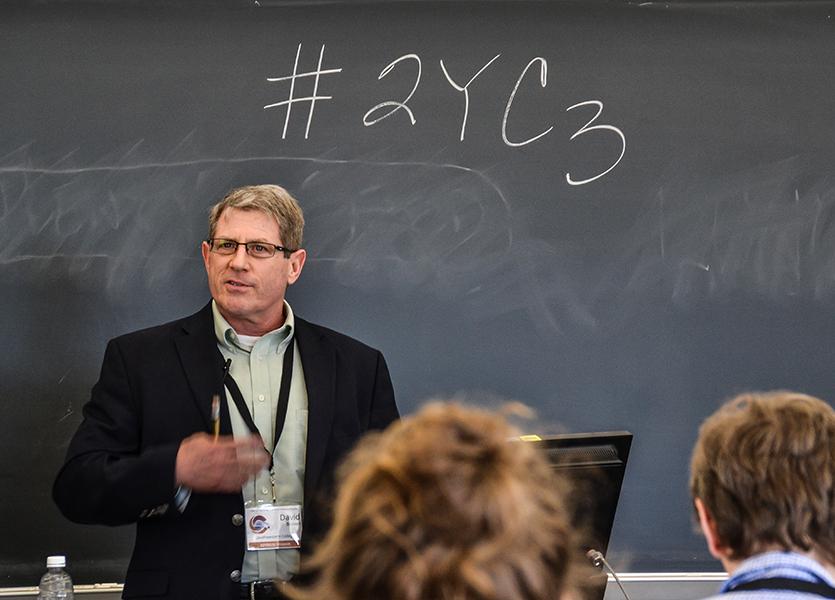 How to engage students in chemistry?

That’s the question hundreds of professors explored during a national conference held at City College on March 11 and 12 presented by the Two-Year College Chemistry Consortium, also known as 2YC3.

They were particularly interested in how they could interest minority students to pursue Science, Technology, Engineering and Mathematics (STEM) majors and professions.

Chemistry professors from across the United States at both 2-year and 4-year colleges came together to share their progressive learning methods.

By teaching how science affects society, the professors can encourage students to pursue STEM for social justice reasons.

“Encouraging social justice is how we give everyone a fair chance,” said City biology professor, Heather Heinz.

The professors agreed that it’s difficult to maintain the interest in chemistry among students who are not majoring in that subject.

“We must make science relatable, give context where it makes sense in their own lives,” said Heinz. “We have to get excited about it and share that excitement if we want to encourage students to pursue STEM.”

Laura Frost, PhD, a professor of chemistry at Florida Gulf Coast University and the director of Whitaker Center for STEM Education, gave one of the conference presentations.

“STEM professors are often the worst at noticing the inefficiency of lecture. Anything that can engage students will improve learning,” said Frost, who encourages teachers to use evidence-based practices in their classrooms.

This memory retention method is referred to as the “Generation Effect,” where those studying attempt to solve the problem before given the answer by creating an association in their mind.

Frost focused on the importance of giving quizzes regularly. Quizzes call for students to regularly retrieve the learned information and to apply it. Re-reading material and studying lecture notes is uniformly ineffective in long-term memory retention, she said.

Another problem is that graduates complain that they haven’t used the chemistry they learned in school, according to the organization’s chair-elect, Kathy Carrigan.

Some professors attend the conference to update their class curriculum, ensuring they’re using the most relevant material.

“We don’t like to hear that, so we want to remove stuff that they won’t use in their field of study,” said Carrigan, who teaches at Portland Community College.

She noted that the importance of attending the conference is to collaborate with other professors, develop projects, and bring the excitement from the conference back to the classroom.

Professors said it was important to keep students excited about learning STEM. If that happened, then the students would be more liketly to pursue a STEM career.