ASG president is recognized for leadership 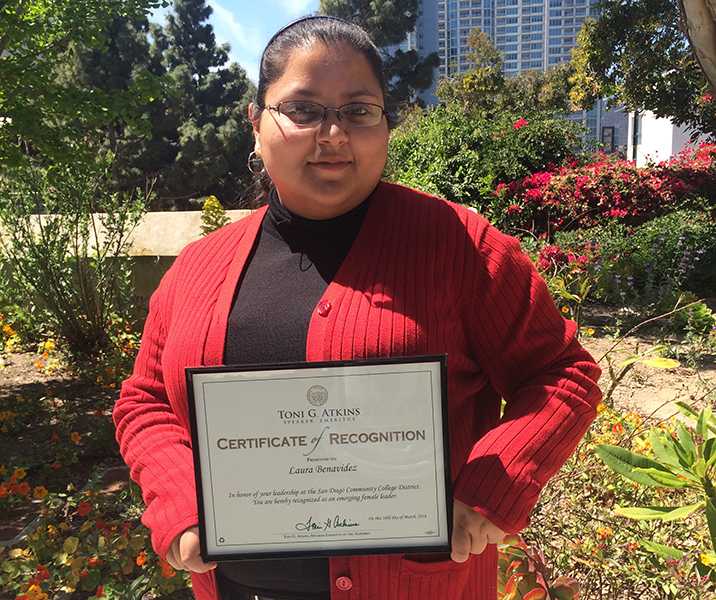 Laura Benavidez is an activist on and off campus. Photo by Destiny Ortiz

“The recognition is very much appreciated,” said Benavidez, who is involved in many activities off campus, including police curfew sweeps.

“I am far from a perfect student and I want others to know that. You don’t have to have everything together to get involved,” she said through email.

Benavidez has been involved in Associated Student Government for three years. She started off as a senator, rising up to Senate president, vice president and president. The president of ASG also serves as a student trustee of the San Diego Community College District Board.

ASG Vice President Hani Hussein shared her experiences working with Benavidez. She wasn’t surprised when it was announced that Benavidez had received an award.

“She goes above and beyond her job duties,” she said.

Hussein and Benavidez have been on the ASG together for three years.

On campus, she is a peer educator for the Mental Health Counseling Center. “I think that all of these things intersect and overlap,” Benavidez said.

She saw her involvement in the ASG as a way to be active on campus as well as to be appealing to a universities.

“I wanted to be a voice for those that feel lost in the system.”

Her term will end June 30. Elections for a new ASG president and other officers will be April 20 and 21. She plans to train the new president.

Benavidez is involved in many activities outside of City College, such as participating in Atomic Betties, a women’s club that supports positive body images for girls and women.

She is involved with the San Diego Police Department doing curfew sweeps. Hussein explained how Benavidez has shown interest in law enforcement and went to the campus police station and offered her help.

“Her leadership skills and her personality has shined so bright that she would be nominated,” Hussein said.

She is also a part of the San Diego Compassion Project that works with families dealing with the loss of loved ones. She recently became a member of the Restorative Conferencing Circles that focuses on keeping the youth out of jail with support and mentorship.

Benavidez’s off-campus activities continues with her position as an after school program coordinator and director of social services that work with affordable housing properties.

She works as a program coordinator for LifeSTEPS, an organization that helps with affordable housing.

She has been accepted to UC Riverside and is waiting to hear back from other universities to make a final decision where she will attend.

“I will miss them (board members) after my term ends, but in the spirit of City College, I’ll return when my community needs me,” she said.