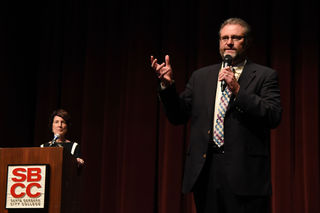 He addressed trustees, faculty, students and residents at a forum there for four of the five finalists for that post on April 28, which included Southwestern College President Melinda Nish.

The Santa Barbara City College Board of Trustees plans to appoint a new superintendent/president before July 1.

“Coming into community college, I was not the best high school student in the world, but I had an opportunity to see how a community college experience can change the trajectory of a person,” he said. “You all see that every day when you work with students, and I just really want to be a part of that.”

He began his presentation describing his upbringing in a farm with his family in southern Oregon, and how that led to working for the fire department, where he became a trainer, which inspired him to pursue a career in education.

“All of those jobs, and all those experiences have made my application here today more valuable to you and more relevant,” he said.

He was asked how his colleagues at City would describe his leadership values, which inform how he carries out his CEO role.

“I think, no I know, that they would tell you the three values that I cherish in my leadership role are loyalty, trust, and respect,” he said, “particularly loyalty to the institution.”

More than a dozens administrators and faculty members at City College declined to comment on both his application and what they thought Beebe had accomplished during his tenure on campus.

At the Santa Barbara forum, Beebe was the third candidate to speak. He drew a sharp contrast with his other competitors. He steered away from big words or unknown acronyms and spoke in a friendly and accessible way.

Beebe said his focus would be to serve the local community, which was in contrast to Nish’s response.

“I am not a big supporter of bringing in international students,” he said, noting that adding dorms were an option in San Diego, “but we sat down and said that wasn’t the focus there or the direction we wanted to go.”

An audience member asked Beebe about his stance on the environment.

“I’m committed to helping the environment,” he said, and used City’s just-concluded Week of Service as an example of his leadership efforts in that area.

In 2013, the college was named the co-winner of the Aspen (Institute) Prize for Community College Excellence, achieving the rank of the number 1 community college in the nation.

For it’s next leader, Santa Barbara City College is looking for a successful communicator, an effective partner with external organizations, and an experienced leader in handling collective bargaining agreements, according to a statement from the trustees.

Santa Barbara City College current president, Lori Gaskin, is to retire on Aug. 1, after serving in that position for four years. In 2014, she received a base salary of $248,355, and total pay and benefits of $306,224, according to the Transparent California website.

Beebe, who has a Ph.D. in Education, was pursuing a second doctorate degree at Fielding Graduate University in Santa Barbara at the time he was appointed president at City.

At that time, Beebe was said to bring strong connections in the community and a national reputation as a top administrator to City College.

“He has transformed the Continuing Education division into what one important government agency described as the best in state,” she continued.

According to the news release from April 2014, the search for a permanent president attracted candidates from both California and the nation, but according to the then board president, Rich Grosch, “Anthony Beebe was the best in terms of qualifications, experience and broad commitment to the community college mission.”