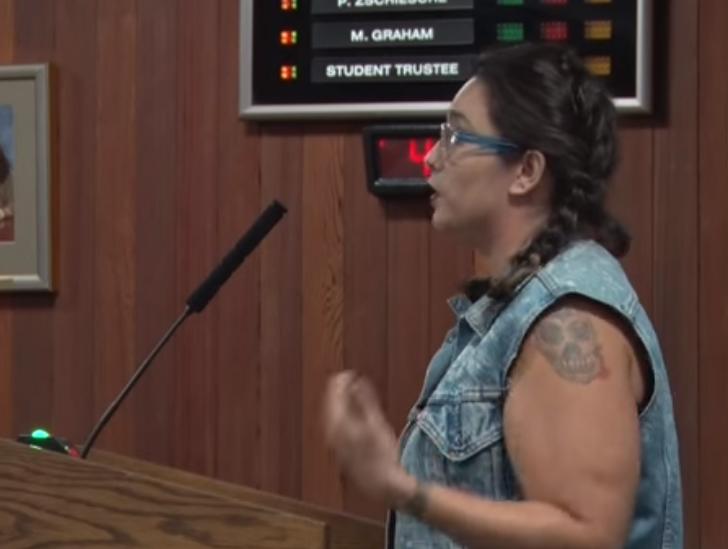 Crystal Martinez told the district's trustees that she is concerned the class cuts in the RTVF program will hurt her ability to get a job. She was one of four City students who spoke at the meeting. Courtesy photo from "Newscene"video

After a dramatic plea by City College’s students and faculty to district trustees, Chancellor Constance Carroll outlined ways the administration plans to support the Radio, TV, Film program though indicated that more class cuts were likely in the fall.

A total of 17 clases were cut in the program and in Digital Journalism this academic year, and 25 per cent of classes planned for the fall have already been cut.

“Classes keep getting cut means it’s a longer process for me and then I’m not going to be able to get a job in the field that I want,” student Crystal Martinez told the San Diego Community College District trustees on April 14.

A day later, Carroll sent a letter to those who had spoken saying a plan could be developed to reduce the number of class cancellations but that more of them would likely occur next fall.

“The first step in this process is to reduce the number of courses in the upcoming fall semester to reduce the potential for cancellations and to ensure that the courses that are offered go forward,” she wrote.

A week later, the dean with oversight of the program pledged to work with its faculty to “save it not kill it.”

The Communication Department, which includes RTVF and Digital Journalism programs, has been struggling to continue its work after years of setbacks. Students were displaced by the remodel of the C Building and have had to work in temporary studios and newsrooms. Electronic equipment worth at least $43,000 was stolen from the department.

At the board meeting, four students spoke highly about the program and its instructors, but lamented the class cancellations which delayed the completion of their coursework necessary for graduation.

“I just want to finish something in my life,” said Martinez.

Adjunct professors Tara-Lynne Pixley and Douglass Mooney also spoke to the board about the impact of the class cuts on students, particularly on minority groups.

The appeal to the board was emotional at times, with Mooney breaking down in tears at the end of his remarks, in which he pleaded that a way e found to save programs like RTVF.

The trustees seemed to react positively to the speakers.

“If it’s that good a program, and it sounds like it is, we should be able to figure out how to promote it better,” said Trustee Peter Zschiesche.

Chancellor Carroll, who after the meeting remarked how impressed she was with the students who spoke, sent a letter to the speakers the next day outlining her findings.

class offerings more reliable within the budget and also plan a timely path for students’ program completion,” she wrote.

She said City’s administration had four goals for the program going forward:

The second goal in the list implies that the only solution to the cancellations is to simply not offer certain classes in the first place, rather than give the usual two-week grace period for students to enroll in a class.

City’s administration has been concerned about the department’s enrollment for some time, the chancellor wrote.

“City College leadership has been concerned for a long time regarding the small enrollment in the RTVF program and the fact that the program’s curriculum and schedule of classes have been ‘overbuilt’ over the years,” the chancellor wrote.

Laura Castañeda, the chair of Communication Department, which includes RTVF and Digital Journalism, is still hopeful changes coming to the program will be positive,

“We hope to continue a dialog with the administration over these cuts. We need their support in order to serve our students. To kill or shrink this department when we are barely getting back to normalcy following the remodel of our facility would be a shame,” she said.

Photojournalism professor Pixley met with the Dean of of Arts, Humanities, Communications, and Telecommunications, Trudy Gerald, a week after the board meeting.

“I want to say first that she emphasized her desire to save the program, not kill it,” Pixley said.

“She mostly advised me that we, as faculty, begin a campaign to draw in new students and retain the confidence and engagement of our current students,” she said. “I don’t get the sense that there’s any hope we’ll be able to get lower minimums with enrollments, so we need to focus instead on how to build up the department despite those difficulties.”

One way to potentially increase enrollments in the classes is to cross-promote them in the departments that have related interests, such as Graphic Design, English and Business. She said the dean offered to support those efforts.