How will Kaepernick be received at Chargers’ game? 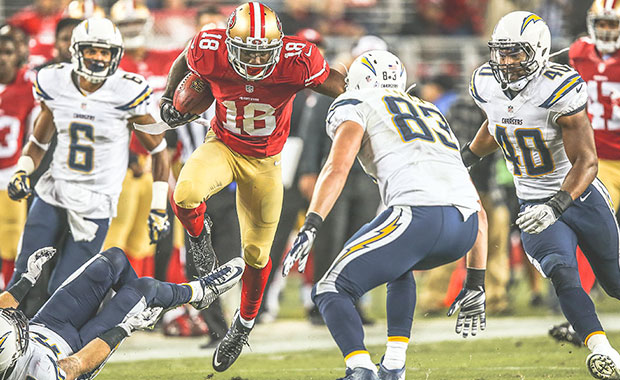 On Thursday night at Qualcomm Stadium, the San Diego Chargers will host quarterback Colin Kaepernick and the San Francisco 49ers for the final preseason game of the year.

Kaepernick has recently received a ton of criticism for his decision to protest police brutality and social inequalities by not standing for the national anthem before the start of games. He has held strong in his stance and has said that he will continue to sit for the remainder of the season until a change comes in the country.

Kaepernick rebutted by letting people know that it isn’t a stand against the military, but rather he is standing up for the downtrodden to give them a voice and platform that otherwise could not be reached.

On Thursday night the Chargers will be celebrating the U.S. armed forces with their 28th annual Salute to the Military with thousands of current and retired military in attendance. It will be a test of how people feel about Kaepernick’s choice of protesting.

There likely will be a sea of boos throughout the crowd since it is a home game for the Chargers. But what will the overall reaction be to Kaepernick’s decision to sit during the national anthem in a city that has been shaped by a huge military presence?

While some see Kaepernick as a villain, some veterans have taken to social media to show their support for him by starting #veteransforkaepernick. They respond to his critics by pointing out that they all fought for the freedoms that Kaepernick is expressing. If people are not given a choice, are they truly free, they ask.

The game can be seen on CBS channel 8 at 7 o’clock in the evening. City Times will be following this story closely for the foreseeable future, so stay tuned.