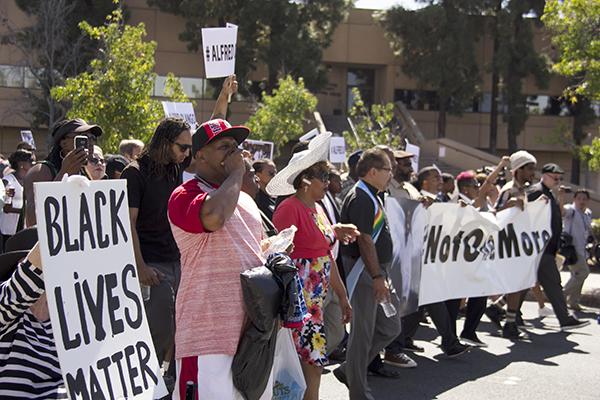 A family’s call asking for help soon turned into tragedy when a police officer in El Cajon shot to death an African refugee, Alfred Olango, on Sept. 27.

He was in emotional distress and was not following instructions, police said. He suddenly drew an object from his pocket and pointed it at an officer, who fatally shot him.

The object he was holding turned out be a vape smoking device.

Olango’s death has sparked outrage at police tactics and calls for the local communities to work together to bring change. Since his death there have been nearly daily protests in El Cajon. African-American faith leaders, activists and local residents demand justice for the fallen man and an end to racial profiling that they said people of color, particularly young men, persistently experience.

On Oct. 1, a crowd of more than a 1,000 people assembled at a park near downtown El Cajon at 10 a.m. Multiracial and interfaith leaders denounced the killing of Olango and called for lasting solutions to prevent more deaths.

“There is no way that all lives matter if a black life doesn’t matter,” said Lee Muhammed. He emphasized that the community should see this tragedy as an opportunity to work together to effect change.

Bishop Cornelius Bowser, of Charity Apostolic Church, urged the public to remember Olango as an individual, not somebody shot to death by police or a criminal.

He said he no longer wanted to hear that police just wanted to do their jobs so they could go home.

“We all want go home,” he told the marchers. “And somebody didn’t go home that day.”

Bowser said the solution was to change the criminal justice system to be truly fair for everyone.

After hearing various speakers, the crowd marched along several streets, arriving at the City Hall complex. There, several people spoke, including Olango’s father, Richard Olango Abuka. He called the officer who killed his son a coward and demanded that El Cajon Police Chief Jeff Davis step down.

Afterward, the marchers participated in a prayer led by the Rev. Shane Harris, president San Diego chapter of the National Action Network.

He requested cash contributions to help the family with burial expenses, and many people donated.

Then proteters marched through downtown streets. They held a banner with the message “#notonemore” and signs that read “Black lives matter” and “I am Alfred Olango.” They chanted “Alfred Olango,” and “No justice, no peace.”

One of the marchers was Grossmont student Joseph Waikel.

“We have to realize that they (the police) are targeting people with darker hues. They are more violent” against them, Waikel said, noting that people stopped with a gun who have a lighter skin are not killed.

Days after Olango was killed, City College students considered what his death meant.

Feven Fessehaye expressed her increasing concern over deaths such as Olango’s.

“To see it in the news, it was kind of scary, but to hear (that it) happened here, it’s even more scary… especially being a black woman,” she said.

Alex Redding, another City College student, had a different reaction.

“I’m kind of numb to it now. I’m not surprised, another black guy killed. It’s not going to stop.”