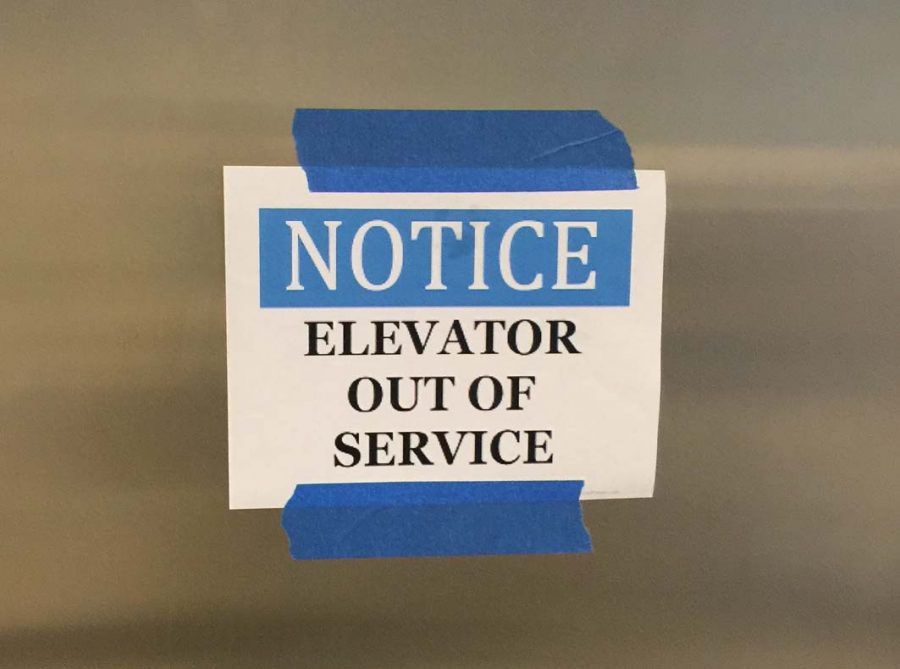 Some students blamed the faulty “Tower of Terror” elevators in the Math and Social Sciences (MS) Building for being tardy or sweaty for a few days last month.

Since early the morning on Sept. 19, three of the five elevators in the MS building were shut down.

“The loud thunder shaking the building was the cause of the elevator not working early this week,” said Derrall Chandler, City’s Regional Facilities Officer at the San Diego Community College District. He said that the “earthquake sensor was triggered” on one of the elevators during the thunderstorm early that morning. He did not specify which one.

“The elevator door never closes, it takes maybe four times to finally close,” Itzel Vega said, “and there’s nobody even there” (triggering the sensors or buttons).

Some students said that they waited for “up to ten minutes” for the one operational elevator to stop on their floor. Then when the sliding doors opened, the elevator was at full capacity.

Vega, 21, an Administration of Justice major, works on the fourth floor at the Price Scholarship office. She confirmed that the students refer to the elevators as the “Tower of Terror.”

“I was by myself and it felt like the elevator was going to fall so I held on grabbing the walls. Once the doors opened on the first floor, I ran outside,” Vega said. “Then later that day there was an out of service sign on the elevator.”

On Sept. 22, one of the elevators in the parking side and one on the left side by the classes were under repair, so the alternate elevators were packed. The elevators were said to be slow and another student waiting said that “they had to stop on every floor prior to going up or down.”

The elevator was a source of concern last year, too.

Professor Jessica White-Magellan, a Sociology instructor, was quoted by City Times: “The doors closed and the elevator started to go up, like normal. I wasn’t really paying attention to be honest, and all of a sudden it stopped going up and it felt like the elevator dropped from underneath me.”

Chandler said that the custodians in the building have told him that they witnessed students jumping in the elevators. He also added that buttons and lights were also damaged due to being pushed by umbrella tips.

“Things not being made like they used to, and the replacement parts now are coming from all over the world,” Chandler observed were other factors in the problems with the elevators.

Not all students were patient with the elevator problem.

On Sept. 23, Beck Jolly, 36, a Behavioral Science major, disregarded the yellow barricade on the fifth floor. He said he pushed it to the side and entered the elevator. Upon entering, he said he was scolded by a man dressed all in black who said: “What are you doing bro? There’s a barricade right there.”

“That fired me up, I cannot cuss on this (interview), right?” Beck asked. “I was pissed off and the only reason I don’t want to use the stairs is because I don’t want to be all sweaty before I go to class.”

During the interview, the man fixing the elevator, who identified himself only as Aatzin, came out to talk with Beck. Aatzin said that he was an employee of KONE Elevators and Escalators of San Diego,and was servicing the elevator when Beck interrupted him.

Later, Beck said it was a “misunderstanding and that I thought that he (Aatzin) was just a student.”

In the MS building, there are two elevators located on the north side by the Mathematics and Social Science classes, offices, and the C-Store and Espresso Station. There are two more in the parking structure on the southeast side – and a “secret” service elevator that is not allowed to be used by the students.

Aatzin explained that the people jumping up and down in the unit are the more likely cause of setting off the earthquake sensor rather than the thunderstorm that Chandler had mentioned.

One student who wanted to remain anonymous said that “jumping up prior to the elevator going up or down creates a sense of floating.”