Students walk out to protest Trump 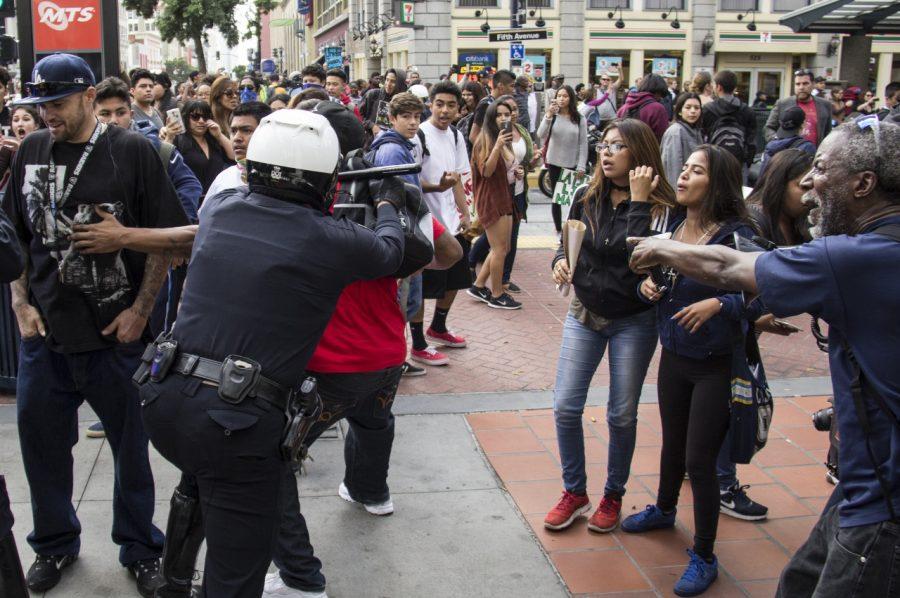 A San Diego police officer clashes with a young man during a march Nov. 16 through downtown streets to protest the election of Donald Trump as president.

Students from San Diego City College and two nearby high schools walked out of their classes for the first time since 2014, marching through the streets of downtown San Diego in solidarity against President-Elect Donald Trump.

In a group of more than 500, the students protested bigotry, misogyny and racism they believe  Trump promoted during his campaign.

The City College walkout began at 11:30 a.m. on Nov. 16. It was organized by representatives from multiple clubs and organizations on campus, including Puente, M.E.Ch.A. and the International Socialist Organization (ISO).

They chanted “Stand up, walk out!” as they handed out signs and made their way through the campus.

The students continued down Park Boulevard, where they met students from San Diego High School.

The vice president of M.E.Ch.A., Monique Salcido Sandoval, explained that the purpose of the walk-out was to come together “as a coalition to say that we are standing together in solidarity — not as different clubs and organizations, but as one voice — students.”

Salcido Sandoval said City College students had walked out of their classes in 2014 to protest of the killing of Michael Brown in Ferguson, Mo., and to raise awareness of the 43 missing college students in Ayotzinapa, Mexico.

The crowd of more than 300 then marched onto C Street, blocking the street and the trolley tracks chanting, “Whose streets? Our streets!” San Diego police officers kept traffic away from the protesting students.

Members of the Brown Berets de Aztlan, a Chicano nationalist organization founded in East Los Angeles in 1967, were present to help keep the students safe. A member who led the march from Lincoln High into downtown explained that the purpose of the organization is to promote self-determination and inform the youth.

The march was halted at the Fifth Avenue trolley station when an altercation between a member of the Brown Berets and a police officer ended in the his arrest. Carlos Gonzalez, 18, was charged with obstruction after he allegedly punched an officer in the face.

As Gonzalez was being detained, the crowd began to close in around the police. Protesters started to shove the officers and yell, “Let him go!”

In response, police threatened to use pepper spray and pushed the crowd back.

“I got punched in the face two times by a police officer and I am 5-foot-1 and weigh 100 pounds. That shows that they are not here to protect us,” said Ashlee Reyes, a member of M.E.Ch.A. and the Brown Berets.

She filmed the arrest while holding a protective barrier between the police and other protesters. She said that Gonzalez did nothing to provoke the officer.

After the arrest, protesters regrouped and marched up Fifth Avenue onto Broadway taking over half of the street.

They settled in front of the federal building on Front Street at around 12:30 p.m. The organizers led chants of, “The students united, will never be divided!”

The crowd held the area for about half an hour.

As the protest began the march back to City College, they were met by the group of students who had walked out Lincoln High School, on 40th and Imperial. The students ran to embrace each other and the crowd grew to more than 500 in number.

Protesters arrived back at City College by about 1:30 p.m., where they were encouraged to hold hands and end the protest with the chant, “Solidarity overcomes racism, police brutality, and oppression.”

“I am here as a woman, as a black, as a Muslim, as a disabled, actually,” City student Sadiya Siad said. “We shouldn’t be divided. We’re not minority. We’re majority.”

Siad explained how these demonstrations were the first step to change.