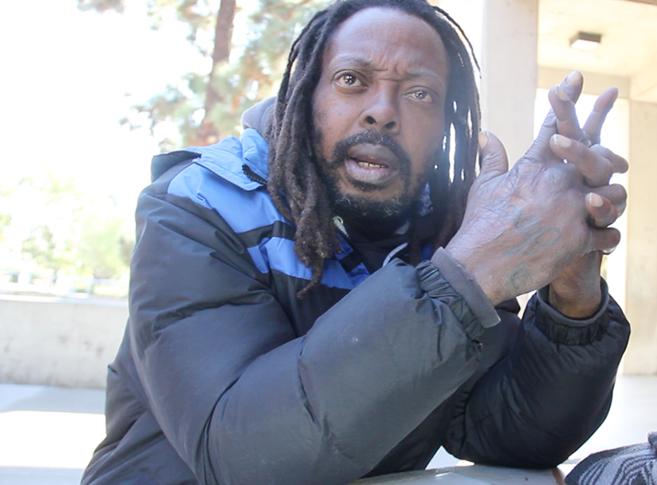 Homeless student Royce Green protests his treatment by police on campus as he struggles to finish his last class to transfer to a university. Photography: Mike Madriaga

The cement is his bed. The staircase an umbrella. The double-paned glass a mirror to check his dreadlocks when the street lights are activated, which also illuminate his handwritten Peace 101 notes. He wears leather steel-toe boots and thick socks to help keep his feet warm and a blue-colored hoodie to block the wind when he sparks up a cigarette.

“Out there is one thing, in here (school) is something else,” said Royce Allen Green, 52.

He said that he recently slept in the rain by the same spot where he protested on the C and 15th streets. The next morning, he said that he got himself dry and went to class – no one suspected anything.

“I’ve got one more class before I can to transfer to the university,” Green said. “It’s Arab 101 (first course in Arabic) and I need a C.”

After he graduated from City College in May receiving an associate’s degree with honors, he visited his family in Tennessee. He returned to San Diego, and eventually lost his spot at the St. Vincent de Paul shelter. Since then, he’s been on the streets.

“To some, they know me as ‘Diamond,’” said Green, who said he was an old-school Crip gang member from 62nd Street and Broadway in Los Angeles.

To 11 kids in Tennessee, he is a grandfather.

“Others just see me as a scary-looking black man,” Green said.

On Nov. 11, at approximately 8 a.m., Green was arrested by the college police.

“He (Green) was helping one of the students with the online orientation for new students,” said James Olmos, who was also helping, “and when we were filling out the application, one of the college officers came by.”

Olmos manages the Transfers and Career Center at M-101.

“He immediately goes up to Royce and asked him to come outside,” Olmos said.

Green said that he agreed to walk outside of the classroom, but did not oblige to the police officer’s request to sit down.

“A couple of minutes after, I hear a bang outside of the door,” Olmos said. “Then me and my co-worker ran outside.”

Olmos said that he saw the college police officer choking Green by the cement wall near the doorway.

“The other officer that is right there with him is trying to put the handcuffs on Royce,” said Olmos, “and then at the same time I see Royce pass out.”

Green said that he doesn’t remember passing out.

“When Royce fell, the officer puts the handcuffs on him,” Olmos said, “and they do the double handcuffs. When he is on the floor he starts to have a small seizure.”

City Times reached out to the City College Police for a comment regarding this incident. The request was forwarded to Jack Beresford, Director of Communications and Public Relations for the San Diego Community College District.

“Because the case is being reviewed by the City Attorney’s Office,” Beresford responded on an email on Dec. 2, “we cannot comment at this time.”

“What I can tell you is that the student was arrested for being drunk in public and resisting arrest after College Police received a call from staff that he was creating a disturbance by yelling and cursing at people.”

Olmos said that he wasn’t disturbing anyone in his center.

“There was no need to pull him outside,” Olmos said. “Royce did not have to talk to the officer if he didn’t want to.”

Green said that the college police did not give him a breathalyzer test or any alcohol-level test.

“He’s been coming to our center for about two years already,” Olmos said. “He is a homeless student and he still commits himself to coming to school – that’s dedication.”

Olmos said that his co-worker sent an email to Denise S. Whisenhunt, interim president of San Diego City College. In the email the coworker shared similar sentiments of shock and appall. On Dec. 2, City Times inquired with Whisenhunt regarding the well-being of return students just like Green.

Constrained from speaking about the case specifically, Whisenhunt said, “Because our students come from all walks of life, including those who are first in their family to attend college, returning military, older students, and those looking to begin a new stage of their lives, our student service programs are focused on helping students start from where they are in their journey.”

Green questioned his newly learned “peaceful resolve” approach to conflicts and how college police treated him on Nov. 11.

“Who wants to come to a school where you receive the same treatment that you receive on the streets?”