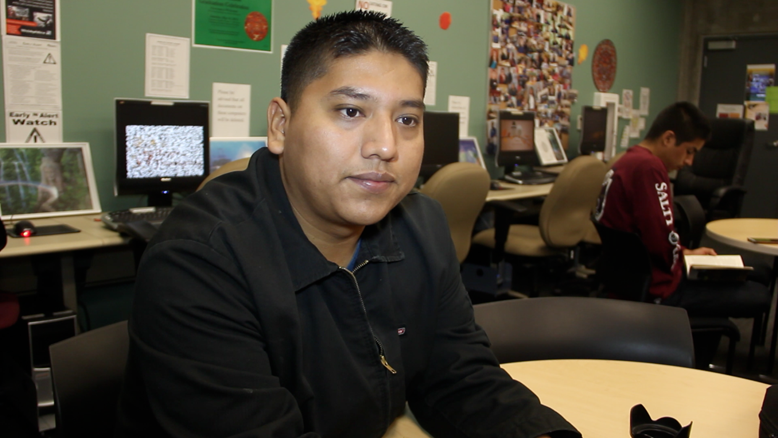 Clemente Ayala advises his students to continue going to school.

Many students are anxiously watching the calendar.

The year 2012 was a good one for these students, who began to apply for Deferred Action for Childhood Arrivals (DACA). The two-year, renewable program enabled students to go to college, work and even travel — legally.

President-elect Donald Trump will take office on Jan. 20 and has said he will begin to keep the promises he made during his campaign. One was to deport undocumented immigrants. Another was to vacate many of President Obama’s executive orders, including DACA.

“Anxiety,” “fear” and “hopelessness” are some of the words voiced by DACA students on campus to express how they feel.

Some are taking more extreme measures.

Lizarraga and her sister are both DACA students. She was emotional during an interview at the Price Scholarship Program office. She struggled to hold back her tears as she questioned, “Are my (papers) going to expire and will they let me renew them?”

On Dec. 13 Lizarraga has an important appointment, though she would not say with whom. She said that if the meeting goes well she will be one step closer to obtaining her U.S. residency.

“Anything can happen,” Lizarraga said. “Trump can decide to take everything we’ve gotten so far.”

Luna came into the U.S. when he was 8 years old. He was originally from Atizapán de Zaragoza, approximately 10 miles north of Mexico City.

On Nov. 8 he watched the election results.

“When Trump was going to win Florida I was kind of scared, to be honest,” Luna said.

One of Luna’s mentors is Clemente Ayala, the assistant to the director of the Price Scholarship Program. Ayala, who graduated from City College in 2008, helps many of the so-called “Dreamers” on campus.

“We have easily 30 to 40 DACA students in our program,” Ayala said.

He said that he helps these students with the admissions process and to apply for financial aid and provides mentoring as they plan their future.

Ayala said that it is hard to process Trump’s victory and even harder to predict his moves come January.

She said that when she attended Lincoln High School, she witnessed the stigma of having DACA status.

Lizarraga said she would hear students saying, “You are illegal. You don’t have the right to go to school.”

She needs 16 more units to obtain her associate’s degree.

Her younger sister was just admitted to UCSD with a “full ride” scholarship.

They are both eligible for financial aid because of their DACA status.

Not all of the DACA students on campus are panicking.

“Oh yeah, I’m going to pack up my stuff,” said Teresa Valle, 19, a nursing student, if she loses her status.

Valle said she would return to her family in Mexico.

“I had hoped to start a new life,” Valle said, “and if I don’t finish my education over here, I can finish it over there.”

On Nov. 10, the San Diego Community College District sent out a mass email that stated that it is deeply committed to protecting the rights of the undocumented students to attend the district’s colleges and programs and receive state aid under provisions of AB-540 and the California Dream Act. In addition, it affirmed, “The entire San Diego Community College District remains committed to our mission of inclusion and support for the great diversity of our student population. As public institutions of higher education, we will continue our work to ensure that all students have full access to our institutions, as well as to the support needed for you to succeed in your studies.”

“That (email) was to calm the students,” Ayala said, “it’s easy to say ‘calm down’ but in reality you do not know what they are feeling and how much fear they have in them.”

On Nov. 28 the Academic Senate of City College unanimously approved making the school a “sanctuary” campus.

In an email to the City Times editor, Justin Akers, Senate president, stated, “A similar resolution is currently being discussed at Mesa. We are asking the president of City College to declare City as a sanctuary campus.”

“RESOLVED, that the Academic Senate calls for the implementation of a plan to ensure that San Diego City College be designated as a sanctuary campus for all undocumented students, staff, and their family members;

Be it also resolved that the Academic Senate asks for an unequivocal, public declaration of our College’s support for and protection of undocumented students, staff, and their families on our campus. We ask that San Diego City College guarantee privacy by refusing to release information regarding the immigration status of our students, staff and community members. We also ask that San Diego City College refuse to comply with immigration authorities regarding deportations or raids.”

Many DACA students are not looking for a safe space, though.

Luna and his sister, a DACA student as well, participated in a walk-out on campus on Nov. 16 to protest Trump’s election.

“It was my first time being around that crowd and it was a good feeling having so many different people come out and have the same thoughts and expressions,” Luna said.

Luna, in his first year of college, hopes to be an art gallery curator one day.

Ayala said that he advises the students to continue going to school as they wait to see what Trump does.