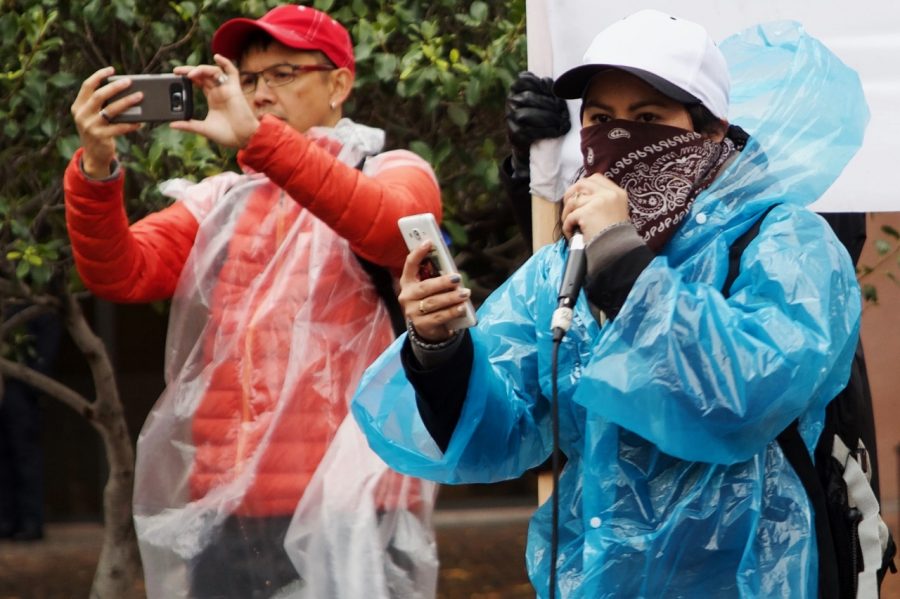 Members of as many as 10 organizations, including M.E.Ch.A. of City College, held signs and chanted as they walked to the Federal Building. There, they were joined by a second protest and continued to Chicano Park.

There was a heavy police presence. At least 40 police officers — on motorcycles, cars and on foot — flanked the protesters as they walked through the streets. One police officer said at least 50 more were nearby.

The protests in San Diego were in solidarity with others happening in cities across the nation. There were no problems during the local protests, in contrast to other cities, where demonstrators clashed with police.

From a raised platform in front of the Federal Building on Front and Broadway, several speakers addressed the protesters.

“We must unite against the oppression here, and on the other side of the border,” said Monique Sandoval, vice president of M.E.Ch.A. at City College. She wore a blue poncho against the rain and spoke into a megaphone with banners for ANSWER SD behind her.

Sandoval and other members of M.E.Ch.A organized several protests against then-President-Elect Trump immediately following the election, including the City College and San Diego High School walkout on Nov. 16.

A handful of students from the high school joined Friday’s protest, as well, but with more difficulty than in November. The gates to the front of the school on Park Boulevard were locked and blocked by teachers and school security to keep the students inside.

Some students said they jumped the fence to join the protesters in front of the school. One student said that a teacher tugged on his poncho to try and keep him from leaving. The students said they were told that they would be marked truant for missing class.

One educator was not only supportive of the demonstration, but addressed the crowd in front of the Federal Building. A Communications professor at Southwestern College, Jordan Mills, said President Trump “is the last gasp of a dying system.”

San Diego Alliance For Justice, an organization founded following the presidential election, self-described as a “coalition of progressive individuals, groups, and organizations in San Diego,” organized the protest.

“The one benefit of this man is that we can no longer deny that our politics are broken and that our economy is inequitable,” an Alliance member told the crowd.

One of the speakers shared her experience living in a country with a leader who was an outsider who promised to change the status quo as the head of the government. Ari Hanarvar said that in her native Iran, “women have half the rights as men, half the population are second-class citizens.”

“The proper response to this world right now that we’re living in is hypervigilance and overreaction,” Hanarvar said. “Let my example be a cautionary tale. Do not let your civil rights be taken away from you.”