Melissa De La Peña misses the cafeteria food more than the campus’s million dollar vantage point. On the first day of school, De La Peña was eating lunch on one of the benches in front of the S (Science) Building.

“The missing cafeteria is one thing,” she said, “but with the noise, it’s also hard to study.”

Other students and staff within the building confirmed that the jackhammers and vehicle back-up alarms can be heard from inside the classrooms.

“If the T Building looks as good as the S Building when it is finished, said De La Peña, “then it will be worth it.”

Last month, Tom Fine, the campus project manager, granted City Times access to the A-D-T Building Renovation Project. This is the tail-end of the Proposition N projects, which are funded by an $870 million bond approved by voters in 2006 to renovate the San Diego Community College District campuses.

The restricted area is accessed by about 60 demolition and construction personnel contracted by Hensel Phelps and the company’s collaborators. Visitors can also gain access, but only if they are pre-approved, pass a written safety test, and wear an orange reflective vest, goggles, a hard hat and closed-toe shoes.

Fine started the tour on the rooftop of the cafeteria.

“Part of the project is to remove all of the concrete here and redo it,” Fine said. “And I don’t know if you have ever been up here during summer; it’s hot and nobody likes to come here. It’s desolate.”

“About 85 percent of it gets recycled,” Fine said. “Like this concrete, it will get smashed up and made into road base for new roads and streets.”
Off-campus, Waste Management separates and sorts through the wood, glass, metal and other recyclables. They then provide the district with information on what has been recycled.

“They want to be good stewards,” Fine said regarding the district’s commitment to sustainable design and construction.

The large rooftop-viewpoint wasn’t given a name on the campus map. It is simply labeled as the “D Building,” a single-story concrete building with a public accessible roof, a ground level open air courtyard, a cafeteria and an elevator.

“So the project here is ‘let’s bring this back to life’ with raised platforms, seating, canopies and reinvigorated planters,” Fine said. “This will be a place where people can come to eat and study.”

From the rooftop, the students and staff can also take photos with a panoramic view of the downtown San Diego buildings and parts of the Coronado Bridge.
The views from under the roof were not as breathtaking.

“I’ve been coming to school here since 2009,” said Brandon Brown, a human development major, “I remember them (the cafeteria personnel) putting out buckets.”
On some rainy days the cafeteria ceiling would leak.

“This is where the leak is,” Fine said, as he pointed to slip-proof plates that lined the concrete between the D and A buildings. “There is a seismic separation here, and over the years the leak got worse.”

“The renovation of the old buildings is good for our future students,” Brown said, “especially a new cafeteria.”

Fine said that aside from redoing the roof drains, they will install new fire sprinkler and alarm systems, make the restrooms more ADA friendly and enhance the cosmetics of the dining area.

Some of the plaques on the old structure will be reused on the new construction, like the Schwartz Plaza plaque which was dedicated to Larry Schwartz, a City College history professor who passed away in 1995. Schwartz Plaza was an open area in the middle of the A Building’s administration and financial aid offices.

Both Brown and De La Peña were happy to find out that the mural above the old bookstore and the large pepper tree by the A Building will remain after the construction is completed.

“Those elements give our campus character,” Brown said.

The curved bridge that connects to the T Building rooftop was partially demolished for the makeover. It was “the first rooftop parking in San Diego,” according to the school website. It will soon be used for solar arrays and a large greenhouse lab for the school’s agriculture and photovoltaic programs. 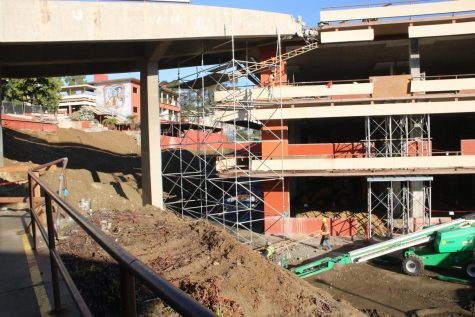 The Proposition S and N project summary table on the district website states that about $64 million was budgeted for the A, D, and T building renovations and that they should be completed by June 2018. A new Child Development Building is listed as the next big project on campus.