Tensions were high Sunday, Sept. 3 when a group of white nationalists planning to have lunch at Chicano Park, as a means to protest the park’s murals, were met with hundreds of members of the Barrio Logan community.

Calls for a rally started on Facebook after Brent Beltran, Vice Chairperson of the Barrio Logan Community Planning Group, leaked a post that revealed he had inside sources with Republican Facebook group, Patriot Fire, who told him about the lunch. Patriot Fire is also the Facebook group that the group of white nationalists were affiliated with, organized by Rodger Odgen.

This post quickly spread across social media and the Facebook group Barrio Bulletin, as well as the news organization San Diego Free Press. What was supposed to be a picnic between two women who wanted to defend the murals ended up becoming a counter-protest that involved hundreds of people from many different backgrounds. 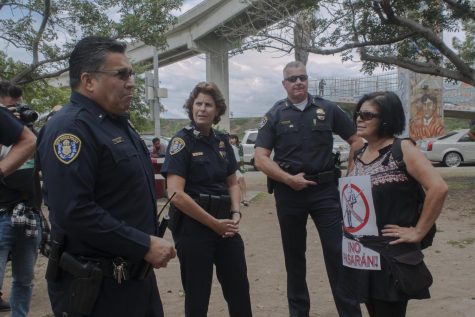 The five Patriot Fire members were quickly surrounded by police and escorted out of the park. 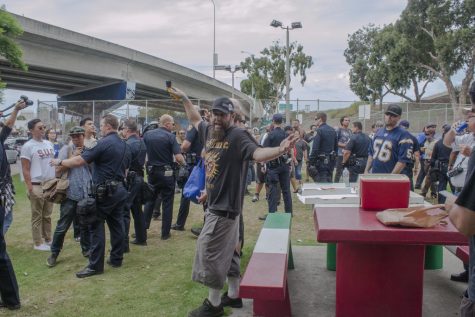 Shaylyn Martos Below: A member of “Patriot Fire” recorded his experience at Chicano Park.

Members of the Brown Berets, Steering committee and even bystanders also joined the police in getting the men out of the park and away from the murals.

“This park is not going anywhere. They can try to take the park away from us, and they’re gonna have to take us with it,” Lucas Cruz, a member of the Steering Committee, said after being asked about what the removal of the park would mean.
While the five men were escorted out, many people rallied around the police chanting “Afuera” which translates to ‘get out’ in Spanish. Some members of the Brown Berets could be seen and heard shouting across the street exclaiming that they don’t need protection from the police.

Stella, a nine-year member of the Brown Berets said, “They’re protecting everybody mainly because everyone is so pissed off.” She has served with the group in Escondido and L.A. She went on to say, ”How many people like Nazis, besides other Nazis?” 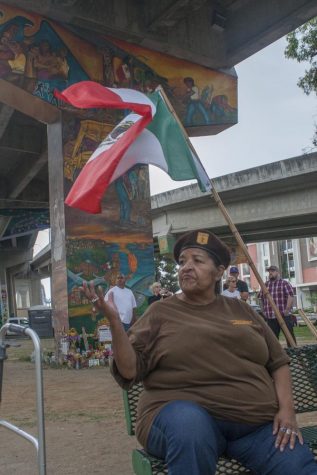 The events that surrounded Charlottesville, NC, which involved massive groups of white nationalists, show that its influence has reached San Diego. However, no one knows for sure if this is a one-time thing, or if it’s just a precursor for future rallies and protests.