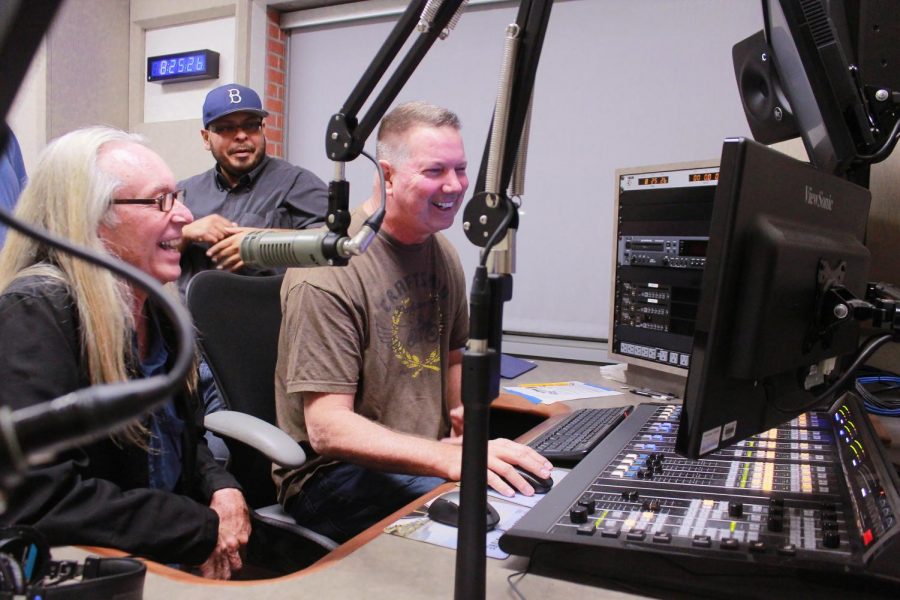 City College is one of the few schools in the country that offers radio classes where students work at a broadcast radio station and people can stream and listen to the student’s show. The campus is home to Jazz 88, but even more amazing it’s also home to its own student run radio station, Student Delivered Sound Radio, that can be heard on KSDS-HD2 88.3-2.

Thomas Weiseman, 24, a student enrolled in RTVF 131, airs his show “Words with the Weise” on Mondays 5 p.m. – 7 p.m. in the evening. His radio segment focuses on sound tracks and music scores from a variety of films.

This is only his first semester in the class and he has already been on the radio. He transferred from Grossmont College specifically to enroll in City’s radio program, and great results came from the move immediately. With this class, he has been able to create material and has shared music such as “Sweet Emotion” from the film “Dazed and Confused” and the actual orchestral score from “Star Wars,” like the soundtrack by John Williams.”

The student radio station has existed for three years, and recently interest and enrollment numbers have increased significantly, thanks to the construction of the new RTVF facilities. During the construction, the program was limited to rooms with no equipment, but things have changed for the better since then.

Professor Chatfield said that the best part of the program is the technical and hands-on experience students receive. “There are people who have a four-year degrees, radio degrees, and discover they are not employable.” Those students typically learn material in the “academically abstract,” rather than “logistically and vocationally.”

“They end up working at a Verizon store and they realize it is not what they wanted. And they go back to City College and get thrown in the deep end. They end up getting a real job in the community, based on the hands-on experience we do.” Enrolling in the class is one of the most challenging yet enriching experiences a radio student can have.

The class meets once a week to discuss the material for the upcoming week. Students keep in touch through a class blog where they discuss issues that occurred while running a radio show. Half of a student’s attendance and participation grade comes from participating in the online class forum.

Sherman Woods, 35, a RTVF student who studies radio said “from not knowing anything about radio, within two months I learned all the aspects of running a radio show” and now can run one with confidence.

There are class recommendations when enrolling in RTVF 131 but no requirements. In previous academic years, prerequisite courses were required – Introduction to Radio and a class where students spent time on the radio. However, due to class cuts in the department, the two prerequisite courses were combined into one, RTVF Advanced Radio Production.

Professor Chatfield describes the situation as a “challenge because curriculum for two classes are also covered in one semester. Students are put into the class and learn everything as they go.”

The tutors’ hours were cut by 66 percent a year ago, and by another 50 percent this year. That’s very little money for instructors who help these students learn all the technical aspects necessary to succeed in this business, including digital editing software, running the radio console, and how to produce a quality radio show while adapting to situations that appear to all happen at once. The radio program is a very intense experience for the students – good but intense.

“One of the things I’ve heard there are new formulas, the students to instructor ratio will be rolled out. That is one instructor to 36 students, there is no way in a class like this we are going to be teach 36 students and give them anything of value. That is always a struggle” said Chatfield.

“How come something that is so celebrated and so successful in the community and an actual attraction to students because they get to go out and join the industry, are being cut?” mentioned Chatfield in regards to class cuts and student success.

For more information on the class, interest in SDS Radio, or if you simply want to enrich your ears with student work, refer to the official website https://sdsradio.wordpress.com