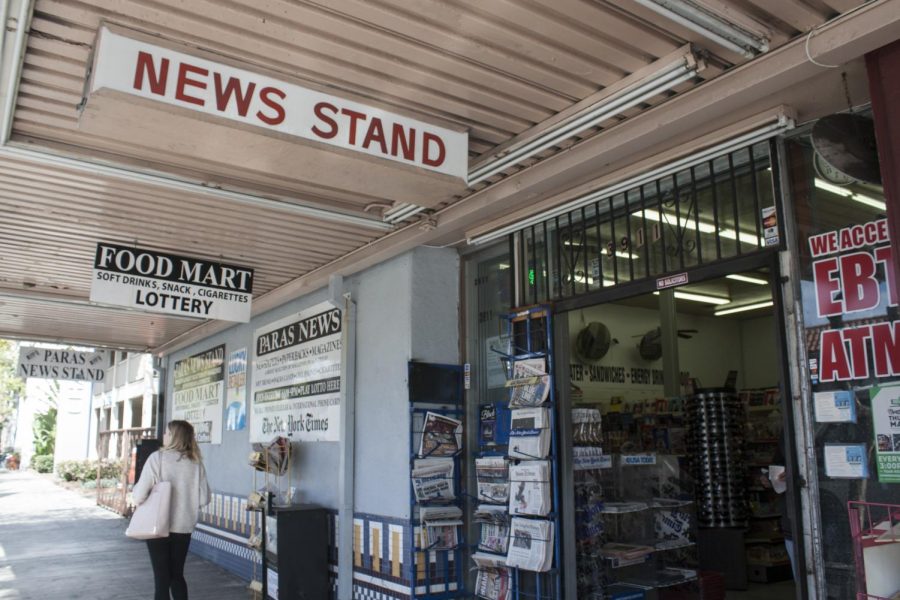 San Diego CityBeat editor-in-chief Seth Combs the Paras News newsstand in North Park one of his favorite places in the world, “They have all these amazing annuals and quarterlies with these people doing amazing design work and illustrations.”

How much are newspapers worth in this digital age? To America’s richest doctor, the bill is over $500 million.

Pharmaceutical and biotech billionaire Dr. Patrick Soon-Shiong agreed to pay a hefty price for the Los Angeles Times and the San Diego Union-Tribune on Feb. 7 and the deal is expected to close within the next month.

Soon-Shiong is reported by multiple sources as the richest doctor in history. He joins the ranks of other billionaires purchasing newspapers, such as Jeff Bezos from Amazon who took over the Washington Post in 2013 and Boston Red Sox owner John Henry who bought the Boston Globe in the same year.

This could be a welcome change for the Times, which has had major upheaval in the past year, including the resignation of their CEO and Publisher Ross Levinsohn. Levinsohn resigned following sexual harassment allegations leveled against him, though he was later cleared of all charges. The Times staff also voted to unionize in January after 136 years of publication.

The Union-Tribune has changed ownership five times in the past decade, the most recent owners being tronc. This newspaper chain formerly known as Tribune Publishing began with the Chicago Tribune and is now one of the largest newspaper and online content publishers in the nation.

Jeff Light, editor-in-chief of the Union-Tribune, said that while he thinks Soon-Shiong will be up to the task, having such frequent turnover of ownership can mean trouble for the company.

“Here comes the buyer in each of these cases: they know the financials, they know some of the business metrics. They don’t know the context, the people or the community,” he said. “When you pile that over and over, mistakes are going to be made.”

Contrary to tronc, which is based in Chicago, Soon-Shiong is a Los Angeles resident. He is the child of Chinese immigrants and grew up in South Africa before moving to L.A. with his wife. He is known specifically for his work on the cancer-fighting drug Abraxane and does have influence in the biotech industry in San Diego.

“I see him as a really significant member of our community as Southern Californians,” Light said. “He is well known and knows that scientific community. We’re a hub of that world.”

The Union-Tribune also has an ongoing project with San Diego City College, a blog about life on the border between California and Mexico. This project is now offered as a class at City College taught by former employee of the Union-Tribune, David Washburn. When asked if this purchase will change that program, Light said, “Oh, I can’t imagine that it would affect that at all.”

One student from the border coverage class said she feels differently. Lupe Diaz explained that while she isn’t worried about her class, she is worried about a big name in the pharmaceutical industry being in control of media in San Diego.

“It left a bad taste in my mouth because I worked with doctors,” she said. “It’s all about money and business. In the 25 years I worked in the healthcare industry, that’s all I’ve seen. So, I don’t know how that would influence the news. It’s a conflict of interest.”

This purchase may be indicative of the changing landscape of print media in San Diego. Another local publication, the San Diego CityBeat, has felt the pressure of appealing to an audience that increasingly prefers online media.

“I thought by now we would have found a system where we can be online and still be publishing a paper that’s sustainable, but that still hasn’t happened,” said CityBeat Editor-in-Chief of Seth Combs.

Some owners of newspapers come in with big ideas to help circulation that do not translate well for their audience. Combs recalled when “Papa” Doug Manchester owned the Union-Tribune and opened the U-T TV studio, which closed a little less than two years later in 2014.

“Let’s be honest and fair here, corporations have always owned newspapers,” said Combs. “However, is one corporation worse than the other, sure.”

Earlier this month the Union-Tribune reported that Manchester had apologized, via email to the Washington Post, to the any of his employees at U-T TV who “felt uncomfortable or demeaned.” A later article from the Post shared that more than a dozen current and former staff, on the condition of anonymity, said Manchester and his CEO John Lynch acted inappropriately towards women.

Combs thinks Soon-Shiong is better suited for this job. “I’m getting the impression that he’s going to be pretty hands off, at least initially, and let people do what they do which is great for them,” said Combs.

He is interested to see if Soon-Shiong does any rebranding, like the tronc decision to change the paper back to the hyphenated Union-Tribune after Manchester’s U-T,  and whether any of the top editor positions change.

Combs also shares Light’s interest in whether stories of biotech innovation will be covered more frequently under Soon-Shiong.

It is early to speculate about Soon-Shiong’s influence in the landscape of media in Southern California, although it seems the community is hopeful for positive change.