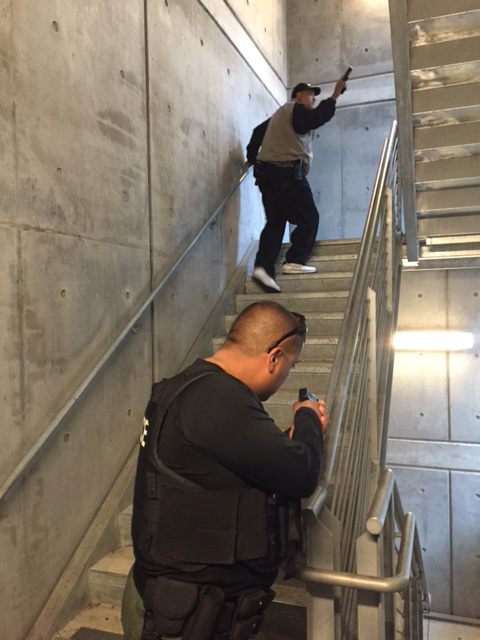 The San Diego Community College District Police Department promotes active shooter training for students and faculty, although their methods have not been tested by a real shooting emergency.

The mass shooting that resulted in the death of 17 students in Parkland, Fla. on Feb. 14 devastated the country, and once again called into question the safety of schools in America. An ongoing analysis by The Washington Post finds that since the Columbine High School shooting in 1999, more than 150,000 students from more than 170 primary and secondary schools across the country have experienced a school shooting. The number of mass shootings on California college campuses within recent decades is also grim: a total of 23 people have died from mass shootings at CSU Fullerton (1976), San Diego State University (1996), Oikos University in Oakland (2012), and Santa Monica College (2013).

After each shooting, interviews with grieving family members and friends often echo a familiar phrase: you hear about this happening other places, but you never think it’s going to happen here, etc. In the wake of the loss of 17 lives in Florida, City Times wanted to determine what policies are in place to protect the school from an active shooter, and ask faculty, administration, and campus police what is being done to enforce campus safety.

According to City College campus crime statistics published in the SDCCD annual security report Safe and Sound, there have been zero homicides on campus or on public property within the department’s domain from 2014 to 2016 (the last year in the report). In the same period, there were nine weapons-related arrests at City College, but the record does not specify how many were in violation for carrying firearms, rather than other deadly weapons. Since City College has not seen a mass shooting or received any recent credible threats, policy and procedure for handling an active shooter remains hypothetical, and training has yet to be tested by a real emergency.

When asked about the security measures in place at City College, SDCCD Police Department Lieutenant Louis Zizzo began by explaining a variety of active shooter response trainings. In addition to conducting frequent trainings for officers to maintain their emergency response skills, the department has also implemented training for faculty and staff through the Emergency Management Resource Team, or EMRT. Lt. Zizzo also promoted the ALICE (Alert, Lockdown, Inform, Counter, Evacuate) training, which is offered year-round to staff, students, and members of the local community, to teach the steps needed to survive an active shooter situation until first responders arrive.

Faculty members who were interviewed all confirmed that they were aware of protocol for responding to an active shooter, but some felt that response training was not enough to feel safe, knowing they would be responsible for a class of students in the event of a shooting. Dr. Leroy Brady,  deputy sector navigator of Information and Communications Technologies, said that news of the massacre in Parkland was devastating and made the threat of gun violence more personal. “You immediately starting thinking, that could be me,” he said, “That could be me in the classroom, that would probably be me trying to shelter a student, or lead students to safety.”

Brady added, “Training is great, however, unless you are trained like a SWAT officer or military, your instincts are to panic. We’d like to feel as though if something like that were to happen, that the training that we have once or twice a semester would kick in, but from a realistic standpoint, you’re afraid.”

Other professors point out that response training only addresses the threat after it’s in effect, and might only lessen the harm of an attack, rather than prevent it. Assistant Professor of Political Science, Dr. Nicholas Boushee, said, “It’s not much peace of mind to know those protocols, the ALICE training. I’ve been through a few of those, and it’s not much of a comfort. I feel like I have adequate training in terms of protocol, but I don’t think it’s enough in terms of solutions in the bigger picture.”

As for preventative measures, Lt. Zizzo mentioned, “We also support and adhere to the Department of Homeland Security’s ‘If You See Something, Say Something’ campaign.” Faculty agreed on the importance of community vigilance in maintaining campus safety. Professors shared that taking responsibility for their students’ safety meant not only responding in the time of crisis, but listening, asking questions, and watching out for their students at all times. Dr. Boushee said, “I think we all have an obligation to provide a safe environment. If we see something that seems suspicious, report it, not ignoring signs of distress, anger, violence, harassment. It’s really important to pay attention to those things and to each other in the campus community.”

Prominent political leaders, including President Donald Trump, have argued that the solution for preventing and responding to school shootings is to increase armed security on campus, and even train and arm teachers and other school staff. All faculty members interviewed– Leroy Brady, Nicholas Boushee, Michelle Chan, Theresa Savarese, and David Kennemer– firmly stated that they would never carry a firearm of any kind on school campus, and that arming teachers is in no way a viable solution. Boushee definitively denied that more guns could make the campus safer and added, “it makes no sense to me, on any level.”

Brady discussed ethical, legal, and logistic complications of allowing firearms in the classroom. “Say we arm teachers…. They’re going to have a tremendous amount of training, all year round. And let’s be fair, let’s be honest with them, they’re going to have to be paid more.”

He continued, “Let’s be realistic, we’re downtown. If there’s a shooting, and a description goes out that there’s a shooter that’s six feet tall, long hair, dark complexion… I’m going to be in trouble. If we’re all armed, what’s to stop SWAT from saying ‘There’s the shooter.’ I could be shot by a teacher! And I bet we’re going to have students who say, ‘if teachers have guns, I can have a gun too.’ It’s too complicated.”

Lt. Zizzo said this measure is not being considered at this time. He said, “There is no discussion as to arming non-police personnel within the district. I think by having a well-trained, and armed, police department at the ready, I feel confident that should the need arise, which like you I hope never does, our officers will be ready to meet the challenge head on and do what they need to keep everyone as safe as possible.”