Construction on A, D and T buildings nearing end

This project is among the last of the Proposition N projects that started in 2009. 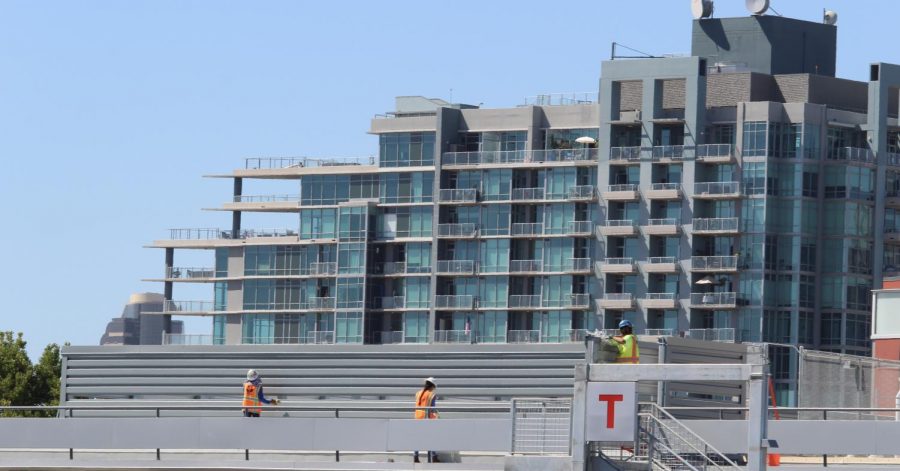 Construction workers applying the final touches on the T building at City College. By David Ahumada.

The A, D and T building at San Diego City College are scheduled to finish at the end of September after two years marked with delays, revisions and restorations.

This project is among the last of the Proposition N projects that started in 2009, according to the most recent version of the district’s Proposition S and N Project Summary Table.

An $870 million bond passed in 2006 to update San Diego Community College District campuses. Approximately $64 million was budgeted to renovate all three buildings, which were scheduled to be finished by June 2018.

“Whenever we renovate an existing building we do our best to try to capture everything that will need to be replaced, but it is not an exact science,” wrote Christopher Manis, vice chancellor of facilities management, in an email.

“Sometimes you don’t know what is in the ground or behind a wall until you get into the project.”

On Sept. 13, an extra $5 million for change orders and claims related to the construction project was approved by the district’s Board of Trustees.

According to Manis, the change orders and claims for compensation by the contractors are due to the “increasing cost of materials, work associated with seismically upgrading the buildings and unforeseen conditions.”

“The design has evolved over time, some of the biggest changes in the plan were to meet seismic requirements,” Manis added.
“This is not unusual given significant increases in materials costs since the project was originally budgeted,” wrote Jack Beresford, director of communications and public relations for SDCCD, in an email.

The additional funds, Manis wrote, “… will come from the reserves we keep for such events.”

City College’s website stated, “the first buildings constructed (on campus) were the A and T buildings, which were finished in 1956.”

In the 1970s, the C, D, E, F and L buildings were constructed with the addition of Curran Plaza and the B St. overpass.
The construction plans and designs on the campus website list that this project was for ADA compliance, refurbishing the existing spaces for students and faculty to gather or study, and to create more square feet of space for buildings.

The D building will receive a new roof deck that is made out of concrete. New roof drains and interior ceiling finishes within the cafeteria will also be installed.

Some of the original plans included a greenhouse and solar panels on top of the T building.

In a 2017 interview with the City Times, Tom Fine, manager of Proposition S and N, mentioned specific items being renovated.
“This is where the leak is,” Fine said then, as he pointed to slip-proof plates that lined the concrete between the D and A buildings. “There is a seismic separation here, and over the years the leak got worse.”

The A building will provide permanent homes for departments like admissions, the bookstore, financial aid, counseling, first year services and health services.

According to City College president Ricky Shabazz, a formal grand opening would follow in the spring, and a new child development center, funded by Proposition S, is the next project for campus in 2019.