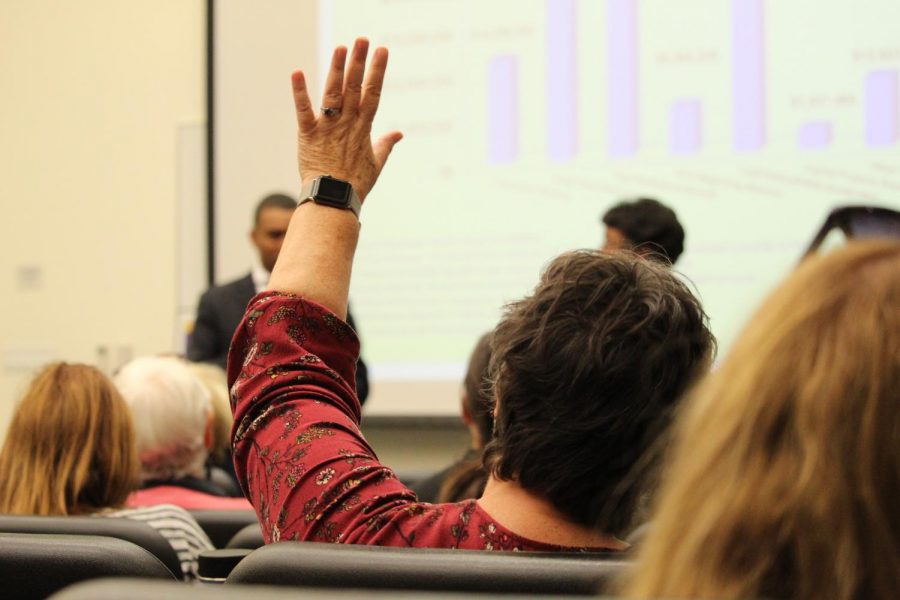 In her 13 years at San Diego City College, geography professor Lisa Chaddock has been known to care deeply about her students’ success.

Her classes are a mix of lectures, field trips, videos and textbook readings so that everyone has an opportunity to grasp the material.

After attending a recent forum by San Diego Community College District chancellor Constance Carroll, Chaddock fears for the future of City College, the diverse pool of students she teaches  and the district as a whole due to decisions being made at the state capital.

“People in charge in Sacramento are all Democrats, but they’re not acting like Democrats,” said Chaddock, one of approximately 90 mostly faculty and staff at the Sept. 18 forum. “They are starting to run education like a business — with the student success model.”

California Governor Jerry Brown has had to make a lot of difficult decisions regarding the state’s budget over the last eight years.

He took over his second tour as California governor in 2011 when the state was operating at a $26 billion deficit. He will hand the reins to the next governor with the state sitting on a $6 billion surplus.

A $32 billion shift in just eight years is no easy feat.

Governor Brown outraged many by making the tough decisions that led to the financial stability of the state. Taxes had to be raised, but more importantly, public services had to be cut.

The latest uproar to a financial decision has come from the community college system after the new funding formula was implemented without much research into its potential effects.

Under the new way of funding community colleges, the importance of enrollment drops 30 percent. Community college districts will receive 70 percent of what they used to receive for each full-time equivalent student (FTES). Additional funding will now be based on supplemental allocation (20 percent) and student success (10 percent).

The full impact of the new funding model is still unknown to almost every community college district in the state. But the San Diego Community College District is already bracing itself.

The district knows that it will only receive 70 percent of what they used to receive for enrollment, which according to Executive Vice Chancellor Bonnie Dowd, accounts for 85 percent of the district’s budget.

“It was too much change,” Dowd said. “(It was) too fast and with too little information.”

To prepare the district reduced its target enrollment from about 43,000 FTES to just over 40,000.

“Sections will be cut, (class) options will be limited,” said Dowd about district preparations for the possibility of receiving less funding.

Dowd agreed that the state is gambling that community colleges around the state will not meet certain success metrics in order to cut funding.

“What if we all (71 community college districts in the state) performed exceptionally well?” she said. “Will the state have enough money to pay if we all met the supplemental and success metrics?

“Theoretically the district could earn more money under the new formula. But there is still too much that is unknown and it makes it really hard to plan for.”

According to Dowd, the state is trying to run a more efficient college system turning more students into graduates. But Professor Chaddock feels this goes against the core values of what the community college system is all about.

“We’re supposed to be here and to serve the life-learners,” said Chaddock. “What will happen to those students who come to us looking to elevate themselves and their skills who are not necessarily looking for a degree?

“They’re trying to get students in and out in two years with an Associate’s Degree and that is not who we are.”

Professor Chaddock stressed the importance of voting. She is hopeful that the November election will bring with it a new governor to California who will come in and undo the entire new funding formula.

“I’m not going to panic just yet,” Chaddock said. “There is an important election coming up in November and a new governor will be elected.

“The candidates seem to be opposed to the new formula, so hopefully whoever it is will throw it out.”