Protestors gathered in solidarity to demand justice, share feelings, and support one another, Dr. Blasey Ford, and women’s rights. 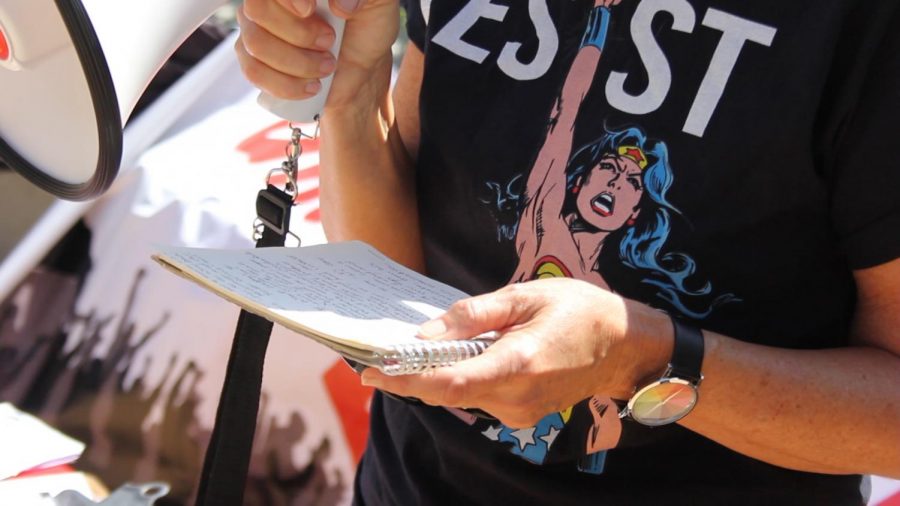 Correction: An earlier version of this story misspelled the name of Amy Arreaga.

When City College student Rochelle O’Donnell Juarez announced at a recent protest that she was a victim of sexual assault, the crowd supported her, thanking her for her courage and saying “we’re here for you.”

“Honestly, I don’t know that much about what’s going on in the media, but I know how hard it is to speak up about sexual assault,” said O’Donnell, who is part of the student organization SAMAFILA. “It feels great to be able to speak up.

Multiple San Diego City College student organizations and community members gathered in front of the AH building on Sept. 27, chanting “blame the system, not the victim.”

They passed a megaphone, shared personal stories, supported women’s rights and stood up to what they saw as an oppressive system.

The Sept. 27 protest was organized to support Dr. Christine Blasey Ford as she testified to the Senate Judiciary Committee about an alleged sexual assault by Supreme Court nominee Judge Brett Kavanaugh that took place over thirty years ago when they were in high school.

Attendees agreed with members of the Senate calling for an FBI investigation into the accusations lodged against Kavanaugh.

“I think it’s ludicrous that there hasn’t been an FBI investigation, especially because an investigation into Anita Hill was done back in 1991,” said community member Raymond Lindeman II, who came to the protest after hearing about it on social media.

“What witnesses say to the FBI is different from what they might say to the press,” said Montgomery, who intends to unseat current city council president Myrtle Cole in District 4. “I’ve been thinking a lot about Anita Hill. … It is a shame that women are still afraid to come out because they won’t be believed, or because their assailant won’t be prosecuted.

“We’ve got to examine the truth and scrutinize any judge nominated to a lifetime appointment on the Supreme Court,” Montgomery said to the crowd at City College.

This is not the first time a Supreme Court nominee has been subjected to intense scrutiny. In 1987, Judge Douglas H. Ginsburg was withdrawn for having used marijuana.

In 2016, Senate Majority Leader Mitch McConnell led a Republican blockade of President Obama’s SCOTUS nominee Merrick Garland, arguing the nominee should be picked by the president-elect.

The Senate Judiciary Committee voted 11-10 to move Kavanaugh’s nomination to a Senate vote on Sept. 28.

“This is the darkest time in Congress since the McCarthy hearings,” said Senator John Cornyn, R-Texas, during the televised hearing. It ended in Senator Jeff Flake, R-Ariz., announcing he was not comfortable voting for confirmation until the FBI could investigate the allegations.

“(Kavanaugh) is the poster boy for the conservative economic elite,” she said. “His nomination to the Supreme Court … would issue forth decades of suffering for women, workers, immigrants, people of color, frankly anyone not in the top 1 percent.”

Members of the International Socialist Organization, Zack Frailey and Amy Arreaga, were key organizers of the protest. They admitted the ISO made flyers for the rally falsely labeling Kavanaugh a “sex offender” but claim their right to speak out is supported by the First Amendment.

San Diego State philosophy professor Steven Barbone did not attend the rally but offered his opinion, saying that it’s easy to jump on a bandwagon, “harder to search for the real evidence.”

He doesn’t believe it is right to label Kavanaugh a sex offender.

“This is still the United States, where people are presumed innocent,” he said.

Barbone said it’s important to examine a person’s more recent past, not just who a person was at a point in early life, but for him being truthful matters and an investigation should take place.

“If (Kavanaugh) did do these things 30 years ago and since then his behavior has been exemplary, we can’t just excuse those things as boys will be boys. … We must still think that justice must be served.

“It’s very important for us to be aware that when these kinds of assaults take place, it’s in people’s better interest to report them and get necessary help right away. I know this is very difficult and easier said than done.”

Many at the rally applauded Ford for coming forward and telling her story. O’Donnell was compelled to speak about what happened to her. O’Donnell didn’t decide to speak up until a family member experienced something similar.

“Part of me feels like it’s my fault for not speaking up, but now I am speaking up and she’s speaking up,” said O’Donnell. “Maybe there’s somebody here that heard me and will speak up, too.”

If you need to speak to someone about sexual assault, do not hesitate to contact the Center for Community Solutions 24-hour toll free hotline at 1-888-385-4657. You can also visit Mental Health Counseling at City College in room BT-105 for support and resources, which includes referrals to a victim’s advocate available to students through the San Diego Community College District.