The City Times staff is updating this article throughout the evening with the latest election results, live from Golden Hall. 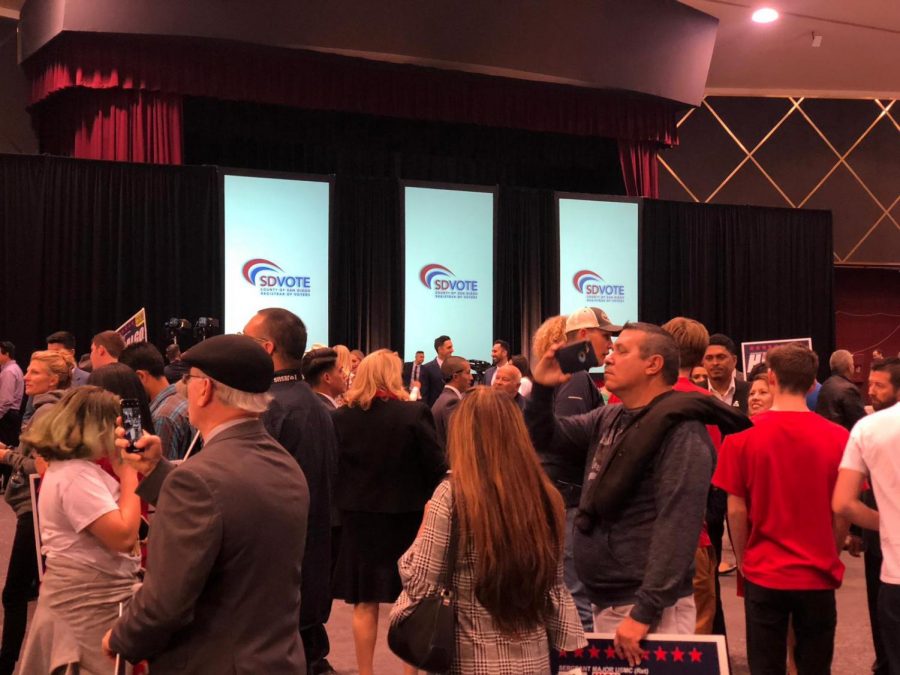 CityTimes staff is live at the election center at Golden Hall in downtown San Diego. By David Ahumada

Votes are still being counted and official results will be announced in the next few days. Stay tuned to City Times for information on election winners.

Former San Diego City Councilman Carl Demaio, the face behind Proposition 6, spoke at Golden Hall. The gas tax repeal is down but not out yet according to Demaio.

Monica Montgomery, who is in the lead over San Diego City Council President Myrtle Cole, spoke with the large crowd of supporters at Golden Hall.

California’s U.S. representative of the 53rd district Susan Davis is leading over challenger Morgan Murtaugh in the latest report with a 64 percent of the vote with 22 percent of the precincts reporting . Davis has been serving the position since 2001.

“I have to make a decision where I want a chairmanship committee, and I think San Diego would be perfect, it’d really bring our entire community together,” said Davis, “I really want the younger people to have options, that they’re not handcuffed to so much debt.”

“The most exciting piece about this is the stature of people running and their backgrounds really help make a contribution to the country,” said Davis, “the people who went out and voted, even for the first time, made a difference.

A change might be in the sea-breeze of District 2
10:13 p.m. By Brian Mohler and Jen Souza

Dr. Jennifer “Jen” Campbell is happy to be in the lead for the City Council District 2 race. She said she appreciates the hard work of her staff and the hundreds of people who’ve helped her campaign.

The hepatitis A outbreak was the tipping point for her getting into the race, she said.

“From a public standpoint it was mishandled,” she said.

The important issue facing the city is the need to house the homeless.

“A housing first initiative with wrap-around services will work, evidence has shown it to work in 90 percent of cases,” she said. “We need an evidence based program and collaboration to get it done.”

Tom Kluczynski of San Diego would like to see Cox for governor and Prop 6 pass. “It’s a massive turnout, but I’m surprised how much the Democrats have come up. I don’t know exactly what they’d be happy about, because the country has done tremendous things under Trump.”

The race for the city council seat district no. 4 is raising eyebrows. Monica Montgomery is ahead Council President Myrtle Cole by four points, as of 8:31 p.m.

Jennifer Campbell leads by nine points for the city council seat in district no. 2 against incumbent Lorie Zapf.

Keeping an eye on democracy
9:30 p.m. By Nadia Mishkin

Debbie Boyd from Poway is at Golden Hall because she loves democracy. “I’m afraid of the rise of white supremacy and the hatred being spewed out of the White House.”

SDSUWest takes the lead over SoccerCity
9:20 p.m. By David Ahumada

Measure E currently holds a 72 percent no unofficial result. SoccerCity San Diego does not look favorable for the future of Mission Valley

If both measures fail to pass, it would be up to the City of San Diego to decide what to do with the land.

Boy Scout Troop 15 left their usual Tuesday meeting at First Presbyterian Church just a half mile away to be at Golden Hall this midterm election. They are working towards getting merit badges that relate to the event.

Richard Johnson, Assistant Scout Master to the troop, said this is their second time at Golden Hall, the first time was for the presidential election two years ago.

The boys, aged 12-17, earn three citizenship merit badges related to this event: citizen of the community, of the nation and of the world.

Although the boys weren’t allowed to express any political views, Ethan, Senior Patrol Leader, said being at Golden Hall and observing the election as it was happening related to the badges they were earning. “We’re talking about measures in California and things that effect communities and this all affects the world.”

The lieutenant governor of California, Gavin Newsom is expected to win the race for governor against Republican challenger John Cox according to NBC News.

The polls will close at 8 p.m. California. Those still in line at that time will be allowed to vote but no one else will be allowed to get in line after 8 p.m. CityTimes staff will have continuous live updates from Golden Hall in downtown San Diego with election stories and results.