San Diego was used by Trump as an example of the benefits of the wall during State of the Union. 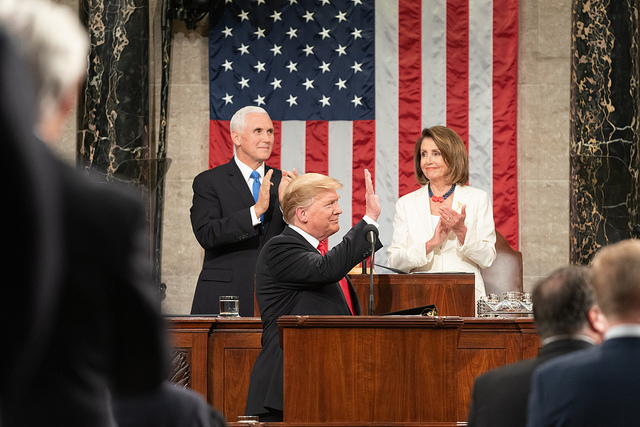 President Donald Trump pointed to San Diego as an example for why the government should build a physical barrier along the rest of the U.S.-Mexico border during his State of the Union address on Tuesday evening.

City College’s Title V program manager Lilian Garcia and adjunct counselor Noel Antonio Puga both disagreed with the president’s characterization of San Diego and the border region as a whole.

Trump, on several occasions throughout his address, labeled the southern border as “very dangerous.” The president is demanding Congress fund his plan to build a wall along the border.

“Where walls go up, illegal immigration goes down,” Trump said before a national audience. “San Diego used to have the most illegal border crossings in our country. In response, a strong security wall was put in place. This powerful barrier almost completely ended illegal crossings.”

He added that he will send over 3,000 troops to the border to “prepare for the onslaught” from Central American migrant caravans traveling north.

“It is that hate and fear that is being thrown to our students,” said Puga, who was recently hired to work at the City College ¡SUBIR! Cultural Center. “That is actually one of the things we want to support students with.”

Garcia disagrees with the image of the border that Trump painted in his State of the Union and throughout his presidency.

“I used to work in San Ysidro,” Garcia said. “(I used to work) in the schools down there. It was always a safe environment.”

Trump’s inability to convince Congress to fund the border wall caused a federal government shutdown that lasted over a month and may cause another one after Feb. 15. If Congress does not provide the funds for a wall, the president has said he may declare a national emergency and have the wall built without congressional approval.

If he chooses to use the national emergency option, Trump will once again have to fight the state of California, which is prepared to challenge the president in court.

“The thought of declaring a state of emergency at the border just to steal funds that belong to displaced fire victims, flood victims and hurricane victims, is not only wrong, it is illegal,” Becerra said in his televised comments. “We are prepared to reject this unjust policy and fight it in court the second it becomes real.”