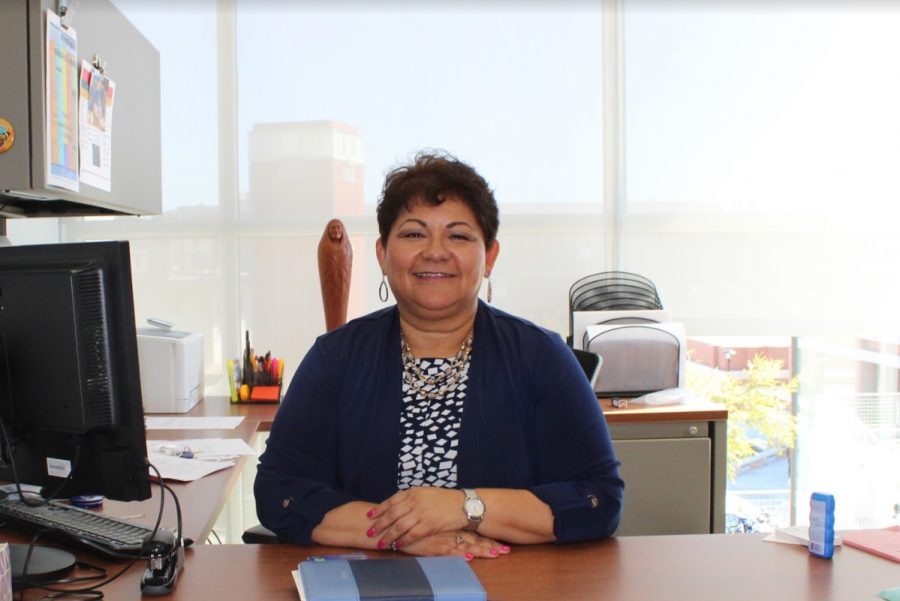 Matilda “Tillie” Chavez sets the example to City College students on working and going to school. By Jonny Rico/City Times

Working a demanding full-time job while going to school, a defining feature of community college, is a struggle that Matilda “Tillie” Chavez knows very well.

Chavez accepted the position of vice president of instruction at San Diego City College days before the Spring 2019 semester started.

At the same time, she is working on a Ph.D. from Old Dominion University.

“People ask me ‘how was your weekend?’ and I say I spent 16 hours doing homework, sound familiar?,” joked Chavez, who is is her third semester of a  community college leadership doctoral program.

As she found herself putting off her dream to go back to school year after year, she eventually came to the same realization of many community college students — careers will only go so far without further education.

“I’ve been wanting to go back to school for the past 16 years, ever since I became a teacher,” said Chavez said. “But I gave so much of my heart and soul to my students and to my work that I kept saying ‘next year’ ‘next year.’”

When Chavez is not working on her studies, she is starting to settle into her new home and new job at San Diego City College.

The goal to help and serve as many people as possible is what brought her to San Diego and to City College.

“It’s everything I expected and then some,” Chavez said.

“(These) are the nicest people I have ever met in my life. Everywhere I go, people are always checking on me. They want me to be successful. It is a new and wonderful change for me.”

She steps into a role that was most recently held by  interim Vice President of Instruction Dr. Minou Spradley, who is leaving City College to become Southwestern College’s vice president of Academic Affairs.

“City College has had several people in this role for the past four and a half years,” Chavez said. “I am here to bring them stability and consistency.”

She stressed that she does not have an agenda to accomplish and wants to provide the permanent leadership that the college has been missing.

“Not to say that the leaders in the past weren’t leaders, (but) they were interims, they were temporary and that does something to the morale of the people here,” she said.

One of the biggest challenges that Chavez has faced since arriving at City College has been the size of the campus. Among her proudest moments so far has been helping a lost student find his classroom.

“That moment when he and I finally found that classroom was the best feeling,” Chavez said. “The teacher came over and I said ‘he’s been with me for 45 minutes.’ I didn’t want him to get in trouble.”

It has always been part of Chavez’s nature to help others. This, plus her enjoyment of science, led her to a career in the medical field as a nurse.

Working in hospitals, Chavez noticed the bad habits of other nurses around her and felt that she could have more of an impact, and help more people, as an educator teaching future professionals in her field.

“The pressure was different,” Chavez said. “It was no longer life and death, but it sort of was.You’re grooming people’s minds. They’re going to treat people based on what I taught them.”

Chavez admitted she struggled initially with the public speaking aspect of teaching. The pressure of having to teach material she knew very well in front of a large group made her doubt herself.

But it was the desire to help which got Chavez past her nerves.

“I used to treat patients and they all had lives and now I was treating students who all had a life as well,” she said.

With two years left in her own program. Chavez spends Monday nights in her virtual classroom and weekends working on homework and preparing for class.

Chavez is also required to spend two consecutive summers at the Old Dominion’s campus in Virginia. For two weeks, she lives on campus in a dorm room.

“To live in the dorms for two weeks, it’s kind of cool,” Chavez said. “It’s kind of incredible at this age. It puts me in connection with where our current students (will be) living (after transferring).

“And that is valuable — not to just remember it, but to live it again.”