Low income students (and non students) can file their taxes for free at City College. 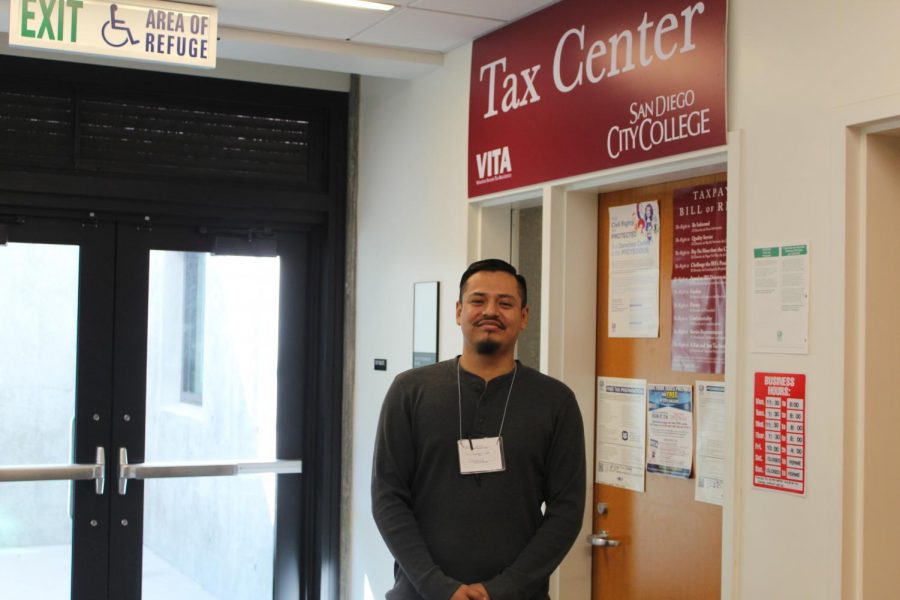 Jaime Lopez enjoys getting clients as much money back as possible. By Jonny Rico/City Times

San Diego City College students and community members have the opportunity to have their taxes prepared and filed at the on-campus VITA Tax Center for free.

The IRS sponsors the Volunteer Income Tax Assistance program. City College became a certified VITA location last year. Now in their sophomore year, organizers are pleased with the results from the program.

VITA is designed to help low-medium income individuals file their taxes for free. Anyone who makes less than $54,000/year is eligible for the free service.

“We’ve prepared over 700 federal and state returns this year,” said Associate Professor Shana Carr. “We have had over $650,000 in returns for our clients so far.”

The City College Tax Center was was awarded the 2018 VITA Rookie Partner of the Year by the IRS, beating out over 1,000 other VITA locations nationwide.

The center has been opened since Feb. 4 and will continue to operate until April 15. According to Carr, the possibility of staying open until June to work on back taxes is under consideration at the moment.

The Business Department at City College has been sending its students to VITA sites to help prepare taxes for over 10 years and realized the, “need to have it on campus,” according to Carr.

The Tax Center is run by volunteer students who took a one-week Accounting 132 course during the January intersession. Students are able to accumulate valuable experience that helps boost their resumes.

Those 70 students are now volunteering their time working at the on-campus Tax Center or other VITA locations around San Diego.

Jaime Lopez is one of those students who took Accounting 132 in January and is now one of the 26 students at the City College Tax Center.

“It wasn’t as hard as I thought it would be,” said Lopez who has experience doing his own taxes. ”It’s information one knows already. It’s just knowing the patterns. Professor Carr did a great job (teaching it).”

Lopez takes delight in being able to get a bigger return for the clients than they thought was coming. “It makes me feel like I know my stuff,” he said.

The biggest challenge for Lopez has been trying to not get too emotionally invested with his clients. He tries to stay as professional as possible.

“I feel that someone that does your taxes has a close look at your personal life,” Lopez said. “I try not to get too close or too involved.”

The Tax Center’s success has been noticeable from the start and it has been able to navigate smoothly through tough situations like the government shutdown at the start of the year and a brand new tax code implemented by President Donald Trump.

“The new tax law did change the curriculum,” Carr said. But she also explained that the change did not cause any confusion to the students who took the accounting course since they had no previous experience and were learning taxes for the first time. “I think it was a bigger challenge for our professors than for the students.”