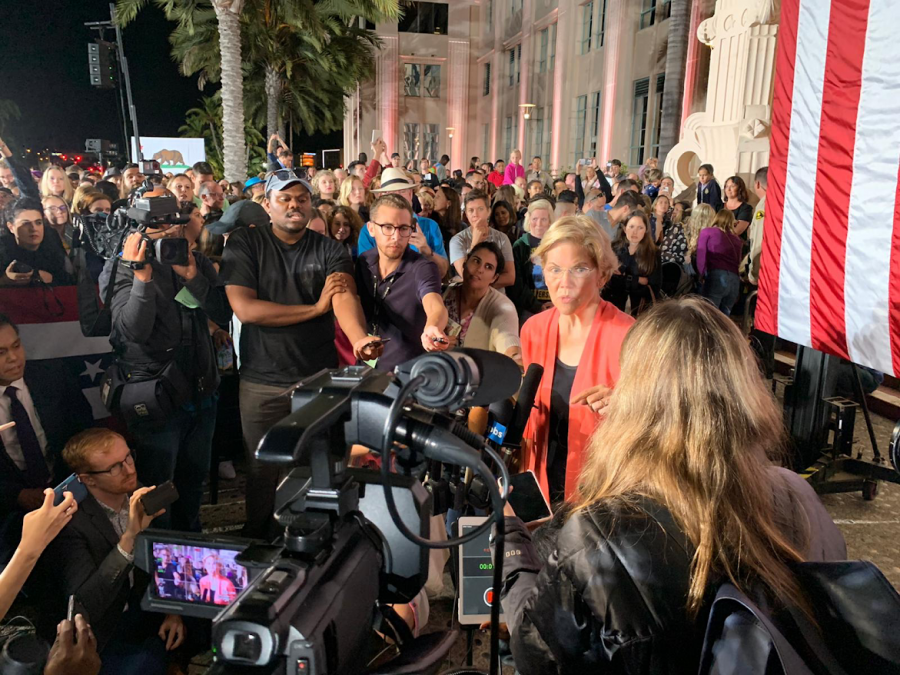 Warren speaks to the media after her town hall at Waterfront Park. Photo by Vicky Pineda

Senator Elizabeth Warren who has high hopes in the 2020 presidential election spoke tonight at Waterfront Park about her campaign.

The senator from Massachusetts hopes to become the Democratic nominee in the next presidential election. She had the rally in San Diego in preparation for the primaries in March.

Warren spoke about her diverse plans for her campaign, one of which is higher educational reform. The senator had proposed ideas for her student loan forgiveness program, which would cancel 95% of all student loans.

“We can provide tuition free post-high school, technical school, community college and four year college for anyone who wants an education,” Warren said.

Click here to read the live blog from the Elizabeth Warren town hall, produced by the staffs of the City Times and Newscene.

Warren introduced the topic by saying that when she was attending college and law school, paying for tuition wasn’t a problem due to the affordable prices, which is not the case for many students today and of recent years.

This contrast in price has been detrimental for many, however Warren’s plan for reform intends to provide a viable pathway for low-income students to seek higher education.

“I think it’s a great plan … I wanna make sure that anybody else who wants an education can have an education without fear,” Angel Garibay a linguistics student at San Diego City College said.

Other students believe it could open up doors that had previously been closed.

“It would mean that I could actually maintain my degrees further down the road and even get further up into my doctorate,” Savahanna O’Toole, a City College student said.

“The American dream is that everyone is at an equal playing field … When someone is given the burden of high loans, debt … that kind of puts them at a disadvantage,” Joshua Potgieter said. “Their whole entire life they’re trying to pay off that debt. They’re not really trying to do what they want to do.”

Laura Nieto, a former City College student and mother to a three-year-old sees opportunities for her son. “I’m now anticipating at some point I would like him to have the option of going to college, so I would like to start working now for a future where that’s possible,” she said.

Tonight, San Diego Assemblyperson Lorena Gonzalez also announced her endorsement for Warren. The response was received with cheers from the crowd.

Like Warren, Gonzalez seeks to improve the labor conditions and homelessness epidemic that is escalating in our country.

“This is it. This is our moment in American history, our moment to dream big, fight hard and win,” Warren said as she closed out the rally.