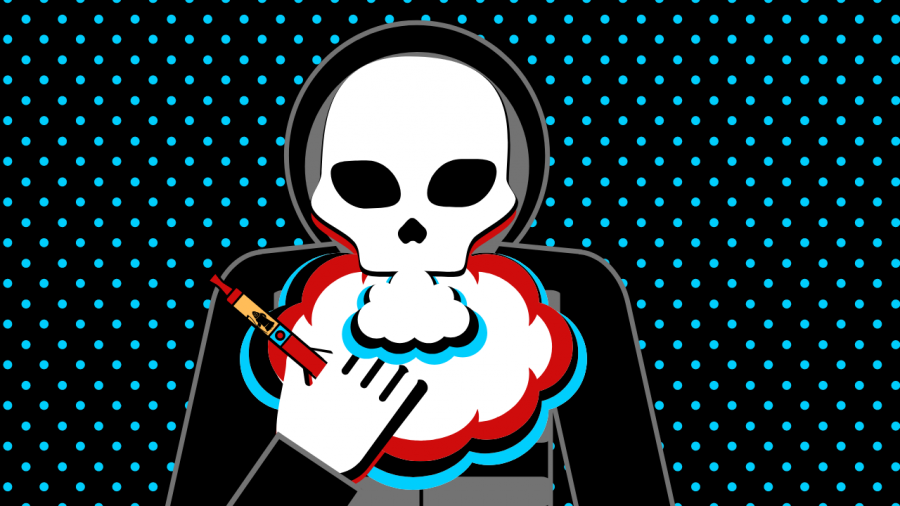 Vape products were once touted as a safe alternative to cigarettes. A recent nationwide health crisis is now leaving users doubting.

Editor’s Note: This story was featured on the cover of the Fall 2019 edition of Legend magazine. View it here.

Electronic cigarettes were introduced as a less harmful and more attractive option than cigarettes. With their easy-to-hide appearance and fruity flavors, vaping products are an alluring item to many, yet they hide one key element: they are highly addictive.

Like every addiction, vaping has many faces, from people who don’t care and admit that they do it daily, to people who are hesitant to say they vape.

San Diego City College student David Mendiola is one of those who is open about his smoking habit. He currently finds himself in a five-year plan to end his nicotine addiction.

“I probably smoked six to eight cigarettes in one sitting,” Mendiola said.

“I can handle it, but I would say I am addicted,” he said after detailing the diverse brands that he uses. “Smoking this, I get the satisfaction of smoking a cigarette, but I won’t smoke a cigarette.”

A substantial number of people started vaping to quit their cigarette addiction. It is now clear that that vaping can be far more dangerous than previously thought.

As of  Nov. 7, 2019 the Center for Disease Control and Prevention reported 2,051 cases of e-cigarette, or vaping, product use associated lung injury (EVALI), with 39 deaths. Of those cases, 31 came from the County of San Diego.

The symptoms for EVALI include chest pain, weight loss, fatigue and nausea. In California all of the reported victims have been hospitalized, most of them requiring respiratory support.

While the specific cause of EVALI remains unidentified, there appears to be a relationship between the illness and products that were not purchased from licensed retailers.

On Nov. 8, 2019 the CDC announced that vitamin E acetate was found in all samples of fluid collected from the lungs of patients with EVALI.  These discoveries give direct evidence of vitamin E acetate as a probable cause of vaping related injury in the lungs.

Vitamin E is commonly found in food and skin creams, however studies suggest that when vitamins E acetate is inhaled it interferes with proper lung function.

While the cause of EVALI remains under investigation, this is the first time the CDC has reported having enough evidence to identify a potential culprit.

Despite the concern the recent events have caused, there are consumers who are still comfortable with their products.

“I used to smoke cigarettes and I wanted to stop smelling like cigarettes, and I know it’s gonna kill me,” SDCC philosophy student Celina Brader said. “I don’t really have a good reason, to be honest.”

Brader was the only woman willing to speak about vaping during the reporting of this story despite the fact that 42% of the EVALI cases in San Diego County are women.

English major Patrick B. Keatly, who calls himself a vape enthusiast, had a different story.  He too started smoking cigarettes before using vape products.

“I switch to vaping because it tastes better, more than anything,” he said. “My father says you can use vaping to quit cigarettes and cigarettes to quit vaping. I’m addicted to both of them … I don’t really do this ‘cause I think it’s healthier or anything. I just do it cause I like the taste … it tastes so much better.”

Keatly uses nicotine in place of other substances he once used.

“I got sober and for a week that I was in detox there’s nothing to do and I was coming off hard drugs so, why not pick up smoking and pass it on?” Keatly said.

The fact that vape products are so addictive is only one part of the problem.

Dr. Eric McDonald the Medical Director of Epidemiology & Immunizations Services of the County of San Diego said that another issue with vaping is that the amount of nicotine is very high.

But not all vaping products have nicotine.  In fact, all but two patients in EVALI cases in San Diego reported using THC vape products.

“It’s a new phenomenon and it might take a long time to figure it out,” McDonald said.

Regardless, Diversion Community Outreach Coordinator Dr. Rachel Crowley, from the Drug Enforcement Administration, said all drugs affect our brain in the same way.

“All addictions are related to part of your brain called the reward center and so whether (it) is an addiction to nicotine or marijuana or opioids, all of those drugs take over that part of your brain … they all affect a little-bit differently, they can be stronger depending on the drug, but they all have that same pull,” Crowley said.

Because these products are addictive, and because experts are still uncertain what exactly is causing the problem, both McDonald and Crowley recommend to stop using them.

Statistics show that the number of people vaping has been increasing.  According to Monitoring the Future, a national survey from the University of Michigan, the 30-day prevalence of vaping nicotine increased from 6.1% to 15.5% in college students from 2017 to 2018.  There was also an increase in vaping marijuana, from 5.2% to 10.9%, in college students as well.

Another area of concern with vape products is that the user often doesn’t notice how much nicotine or THC is being ingested in one sitting. Vapes offer no indication, as opposed to a cigarette which eventually burns out.

The Monitoring the Future survey also showed that less than 23% of high school and college students see a “great risk” in regular e-cigarette use.

But when you are battling an addiction, there is much more than numbers.

According to Crowley, people under 25 a have higher risk of developing an addiction.

Plus, an addiction to vaping means that there is limited information available on long-term or permanent problems, or of any higher risk of other health conditions.

Yet, in the moment, the urge is stronger than any “what-if” for many.

“Like, it’s all bad. I know everything I smoke is bad. Not weed, never weed, but like nicotine, yeah,”  Mendiola said when discussing his addiction.

“Let’s say you are just running a lot for like a minute and you’re tired from running, you’re thinking, ‘I want some water, I need some water right now,’ just like that. I want a cigarette. I need a cigarette,” he continued, “It’s wanting and needing it at the same time.”

McDonald recommends to stop vaping altogether, but those who choose to continue should purchase products from a licensed retailer. Licensing can be checked online at cannabis.ca.gov.

Additionally, resources for addicts are available for free by calling 1-800-NO-BUTTS or 1-800-QUIT-NOW.

Most recent updates on EVALI are available at cdc.gov.