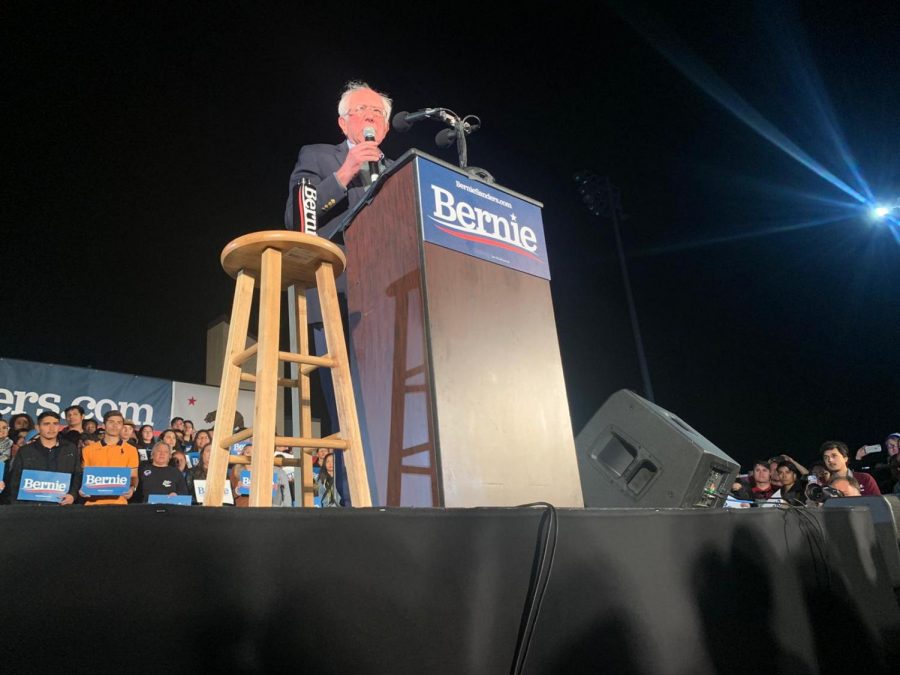 Vermont Senator Bernie Sanders who has high hopes for equality pay and free college tuition paid a visit to San Diego just a day after the democratic debate on Dec. 20.

San Diego City College alumna and immigrant attorney Dulce Garcia spoke to the public before Sanders stepped on the stage, and shared a story about her journey as a Deferred Action for Childhood Arrivals recipient.

“I am one of the estimated 11 million undocumented workers in the U.S. without a (path) to citizenship,” Garcia said. “I am part of this community and I belong here.”

She talked about how she started pursuing immigration law and how her brother’s deportation affected her.

Garcia also showed her support for the senator of Vermont.

“We need a leader that’s going to move us in the direction of healing. Bernie Sanders is that compassionate leader who will do what is morally right,” Garcia said. “I cannot vote but I can organize.”

Sanders, along with his wife Jane O’Meara Sanders, took the stage in front of the crowd.

He also stated that he comes from an immigration family just like most of the people living in this country.

“If America stands for anything. It stands for being a welcoming country, a country which welcomes and understands the enormous progress that immigrants have brought to our country,” Sanders said. “We believe that diversity is an asset and we are proud of diversity.”

Sanders first promised to end demonization of undocumented people in the country. He also mentioned that he will end President Donald Trump’s willingness to try and divide the country based on religion and race.

“What our campaign is about, and what our administration will be about, is bringing people together; not dividing them up,” Sanders said.

Sanders also wanted free tuition for community colleges and universities, including for all DACA recipients, and to cancel all student debt in the country.

The crowd chanted, “Bernie, Bernie, Bernie,” and the senator quickly responded, “It’s not Bernie, it’s all of us in this together.”

At the end of the rally, he shook hands with a lot of supporters and even took selfies with some.

Since California moved up its primary to Mar. 3, a lot of the candidates are paying more visits to the golden state.

Sanders has already held two different rallies earlier this year, one in March and the other one in August.

Christina Painton and Susana Serrano of Newscene contributed to this report.