The campus cafeteria opened on Feb. 3 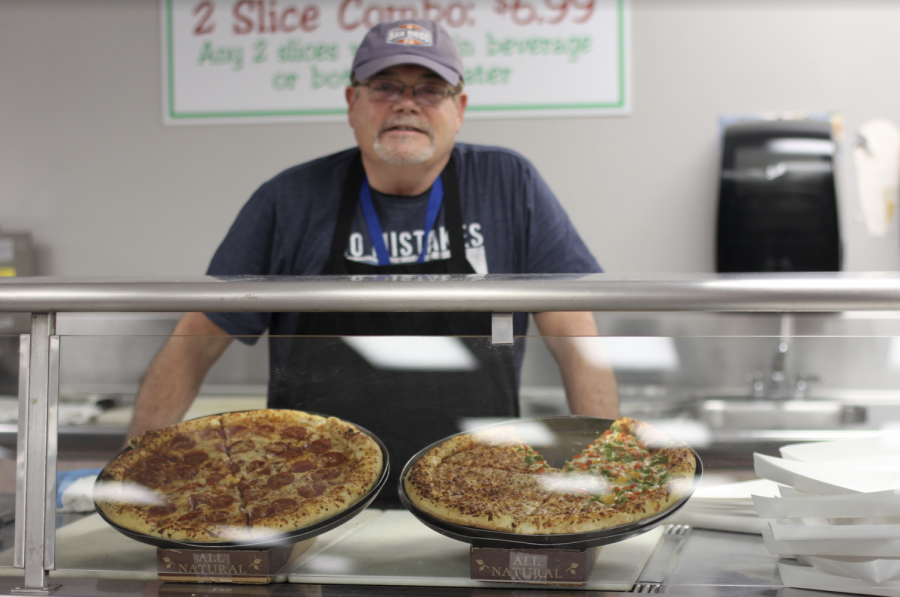 Bob Watts behind the counter of "Pizza Galore." Pizza Galore is offering pizza slices for $3.15 for a slice or a two-slice combo for $6.99. Photo by Vicky Pineda

UPDATE: This story has been updated to reflect the change in schedule for the cafeteria operating hours.

After years without an on-campus cafeteria, City College began serving food once again on the first day of the spring semester.

President Ricky Shabazz gave an update at the 2020 Spring Convocation on many of the ongoing plans for the school last Thursday. He announced the cafeteria was to open on Monday, Feb. 3 as the spring semester started.

Hot meals were to be prioritized with more options being provided later on as the cafeteria continues to expand its operations.

“I believe the approach is that equipment has been prioritized … and you will see phases where the pizza will be offered, then the soup and sandwiches, and will slowly integrate into the kitchen,” said Chris Manis, vice-chancellor of facilities management for San Diego Community College District, in an earlier statement.

As expected, breakfast was being served early in the day, with a menu that included French toast, eggs and Tater Tots. Nearby hung a lunch menu that listed burgers, hot sandwiches and French fries. On the other side of the cafeteria, cheese was being spread onto large pizzas next to slices ready for purchase.

Although food was being served on both sides, the rest of the room still looked like it had a long way to go before it would be functioning at full capacity. Most of it was unoccupied and it had equipment that was not yet being used, such as a soup station. Other instruments like water heaters had signs hanging that stated they were not working.

Regardless, morning students can still enjoy a variety of options.

According to employee Alejandra Cheshire, the menu does not offer vegan options, but it does include vegetarian ones.

Earlier delays in the cafe were due to equipment delivery problems and confirmation of on-site approval.

The cafeteria is located between the A building and the bookstore.