UPDATE: SDCCD announces plans to move to online classes in response to COVID-19

The conversion is expected to be incremental, starting March 16 through March 31 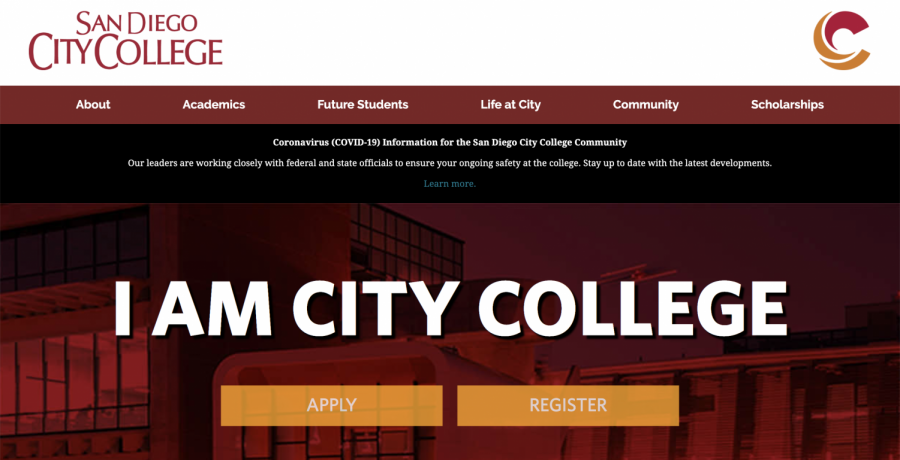 A banner directed at the City College community regarding the coronavirus appeared on the campus website on March 10. sdcity.edu screenshot

12:04 p.m.: Story updated with the information about the March 11 message to City College, which included new updates on event cancellations.

As colleges and universities across the country close or adjust how they teach their students in response to the coronavirus, the San Diego Community College District and City College are announcing their own plans.

Constance Carroll, the chancellor of the San Diego Community College District, said the district’s three colleges and Continuing Education are planning to begin the conversion of on-site classes to online.

At 11:24 a.m. on March 11, Cesar Gumapas, the City College Public Information Officer, sent an update regarding the coronavirus to campus via text and through the campus safety app Live Safe.

Gumapas’ message echoed what Carroll previously said in her earlier messages. It also said events on campus are being canceled such as the Social Justice Conference, City Women Rock, and Friday’s foster youth event.

The conversion is expected to be incremental, starting March 16 through March 31.

District colleges and Continuing Education are seeking approval for the Emergency Blanket Distance Education Addendum from the State Chancellor Eloy Ortiz Oakley for the effective dates of March 16 to June 1.

The chancellor sent out a letter on Tuesday, March 10 addressed to district colleagues and friends. The letter can be found on the San Diego City College website.

It was an update to a letter the chancellor sent out on March 4. A separate letter to students was expected to go out sometime this week, according to the March 10 letter, to prepare them for a change described as “inevitable.”

Carroll also stated that district officials have been in close communication with health agencies and have been closely following the actions of other universities and community colleges.

“It is understood that this is a complex undertaking and that some classes with laboratory or other hands-on components will have difficulty with this conversion,” said Carroll in the statement. “Efforts have been made to work with accreditors and others to see how this problem can best be surmounted.”

Presidents of the colleges and Continuing Education, along with department deans and chairs, have already started to convert some of the classes to online using Zoom and Canvas.

Some students have already reported changes. Multiple students told the City Times staff that math classes had already converted to online with little notice before the March 10 letter. At least one face-to-face midterm for an online math class has also been canceled.

The Accrediting Commission for Community and Junior Colleges (ACCJC) and the Western Association of Schools and Colleges already have permission from the United States Department of Education to use online technologies.

“We are reaching out to other licensure organizations to see if hands-on or stimulation adjustments can be modified,” said Carroll in a statement. “ We will need to find alternatives.”

The study abroad program at City and Mesa have been canceled for this summer.

The letter also said one event, Take Our Children to Work Day, had been canceled. It did not include updates on any other campus events.

Carroll does plan to send out more information to all students and faculty regarding the transition to online classes temporarily.