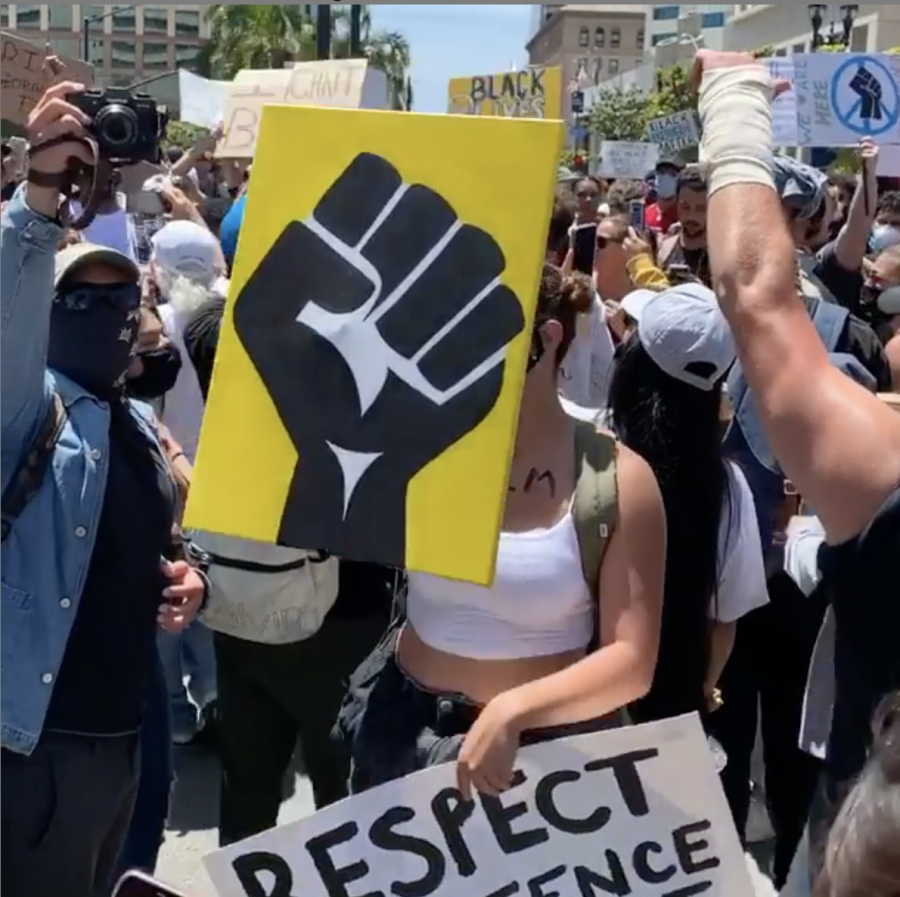 Rendon joined hundreds of others that marched across downtown to protest police brutality in San Diego. Photo provided by Oscar Rendon.

He knew they were protesting and he knew he needed to join them.

“I decided that it was important that I join protesters, so I ran as fast as I could from City College to the group of protesters who began marching,” said Rendon, the former Associated Student Government president.

Rendon is a political science major at City College and he served as the ASG president this past academic term.

National protests have taken place over the past week, in part as a response to the death of George Floyd, a black man who was killed by officer Derek Chauvin in Minneapolis. Three other officers who were present but did not intervene have been charged along with Chauvin.

Rendon explained the protestors wanted to “bring light” onto reports that black people face severe sentences and are even killed for minor offenses, or sometimes alleged minor offenses, as was the case of Floyd.

According to Rendon, the protest was peaceful, yet Rendon said that around 5 p.m., the police started using tear gas against the protestors.

He said they were trying “to label them as being disruptive.”

The following day, Rendon attended a press conference at the County Administration Building.

The purpose of the conference was to address possible reforms that will prevent the use of excessive force by police officers.

“The reason that we were asking for that here is because we want to see it implemented all over the state and eventually all over the nation,” Rendon said.

Within days, numerous police departments in San Diego County announced a ban on the use of carotid restraints, including the San Diego Community College Police Department.

BREAKING: All county law enforcement agencies ban the use of carotid restraint. pic.twitter.com/6AUv7uyGiH

A carotid restraint is a method that restricts the flow of blood to the brain by pressing the sides of the neck in an attempt to restrain someone, causing unconsciousness.

When Floyd was killed, the police officers were not using the carotid restraint. Chauvin used his knee to press on Floyd’s neck, which led to his death.

Petitions for banning carotid restraints started years ago. Rendon would like to see more results.

“I would like to see a bill proposed and legislation that is going to hold law enforcement accountable for misuse of conduct and also for not honoring the code to serve and protect,” Rendon said.

Rendon said most of those at the protest were college and high school students, but that people of all ages participated. Rendon also noticed people of many different races joined the march.

“Race-wise we were all united that day,” Rendon said. “I felt like you could see such a diverse mix. It was really strong the amount of energy that was felt that day.”