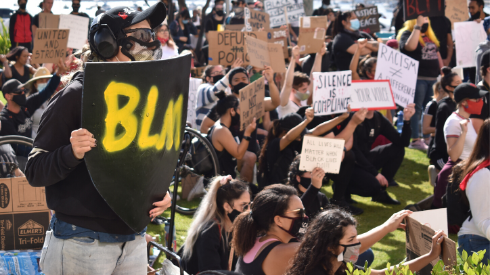 Protests for Black Lives Matter continue ten days after the killing of George Floyd. Protestors wore face masks as a result of the COVID-19 pandemic. Photo by Melisa Cabello-Cuahutle/City Times

On the tenth day after the death of George Floyd at the hands of a Minneapolis police officer, over a thousand people took part in a protest at Waterfront Park.

The protest on June 6 was completely peaceful with people from all races gathered. While it was mostly people in their 20s, younger and older people attended too.

Protestors, mostly wearing masks due to the ongoing COVID-19 pandemic, were chanting phrases like “I can’t breath,” “Black Lives Matter,” “hands up, don’t shoot,” and “this is what democracy looks like.”

Those who were leading lost their voices, so they took turns initiating the chants. For the most part, they had no microphones, so they had to rely on their voices only to convey their messages to the rest of the crowd.

“I’m here to protest for Black Lives Matter for what they represent, my skin, my race, and I am here for George Floyd, (for) justice,” said Avier Washington, a nursing student at Southwestern College.

The protest started in front of the County Administration Building, where the National Guard was posted at the entrance. Protestors gathered there and began marching at 5 p.m. throughout downtown — first down Broadway, then moving through the Gaslamp Quarter toward the Convention Center and eventually going back to Waterfront Park.

At times, a person or an argument got heated. But each time, those gathered around would remind the others that this was a peaceful movement.

Space was made for black people to volunteer and speak in front of the crowd, before and after the march.

“Change starts at the table,” said one of the speakers, whose name was not shared with the crowd. “There are a lot of tables that I will not be invited to because of the color of my skin. These are tables that y’all are able to sit at. Open the conversation. Don’t let it shut it down. This is a movement, not a moment.”

One speaker who did share his name was Aidan Cervantes. Cervantes said the protest was organized by 15-year-old Gabriella McField who he said he lost contact with around 5 p.m. as the crown began to move. McField later confirmed through a direct message on Twitter that she was the organizer.

Alder Flores was next to Cervantes asking for volunteers to speak during the protest.

“We are here to make some fundamental changes to the system, to make it an equal opportunity for everyone in our country, especially people of color,” Flores said.

“We are demanding that the police department get defunded. Let’s talk about change, let’s talk about bringing them to our level and working for the people.”

Defunding the police refers to decreasing their budget and responsibilities. According to protestors, that budget can instead be used to invest in the community.

According to the American Civil Liberties Union, “It is time to divest from law enforcement and reinvest in the Black and Brown communities they unjustly target.” In a petition, the ACLU suggests prohibiting the police from enforcing a range of non-serious and non-dangerous offenses and using savings for the current police budget for alternative, safe policing.

They chanted repeatedly “take a knee” to the National Guard, who did after another uniformed National Guard member approached and talked to them.

A young black woman could be heard screaming the names of people who died in police custody.

Flores then started asking if anyone wanted to share something with the crowd.

Although there have been numerous marches in recent days as a response to Floyd’s death, protests against police brutality have been going on for years.

“People are fed up, social media is real and real active right now so you know when something pops up, everybody sees it’s not just one person,” Washington said. “So that video there with Floyd just went crazy cuz he was really innocent. They have proof.”

Action against police brutality has continued since.

“It’s not okay,” Washington said. “It’s modern-day slavery, it’s modern-day lynching and we are just here to educate and that’s what I expect all of us to do (with those) that are uneducated.”

At 6:45 p.m., protesters stopped for a moment of silence lasting eight minutes. Derek Chauvin, the ex-officer who killed Floyd, had his knee on his neck for eight minutes and 46 seconds.

The protest ended around 7 p.m.

Most people left, but those who stayed spent the time talking, singing and dancing while the National Guard and San Diego County Sheriff continued to stand guard at the entrance to the County Administration Building.

City Times wants to hear your voice. We are looking for our community — fellow students, faculty, staff and alumni — to share their perspectives on the recent protests against police brutality and racial injustice against the black community. You can send your thoughts in writing by email or share them on social media, including @sdcitytimes and #cityspeaks. You can also leave us a voice recording.