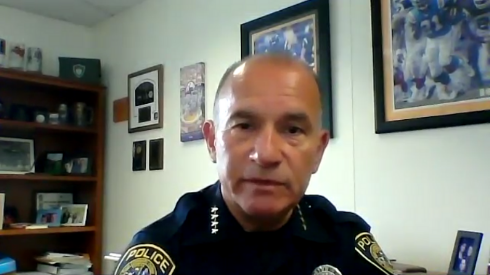 In the days after George Floyd was killed by a Minneapolis police officer, police chiefs from around San Diego came together for a meeting. On the agenda was a discussion about a controversial police hold.

In a recent interview with City Times, Ramos discussed the ban of carotid restraint at that meeting and the protests against police brutality and racial injustice faced by the Black community both here in San Diego and around the country.

Ramos explained use of force policies for the SDCCD Police, which is the largest community college police department in the state of California with 77 employees, according to its website.

He also shared tips for  protestors to stay safe during peaceful protests.

The interview was conducted over Zoom on June 5 and lasted a little over 30 minutes. It was edited for clarity and length. Ramos was not given the questions in advance. However, the topics covered were shared beforehand over email.

Q: When did the SDCCD police department make the decision to remove the carotid restraint? Is it being replaced by something else?

A: “On Monday (June 1), all the county chiefs and sheriffs met as we do every month. Obviously that was a topic of concern and that was a suggestion that was put forward by Dave Nisleit from (the San Diego Police Department). It was discussed by all other chiefs, myself included. …We felt that it was probably a good thing to do in the spirit of cooperation. It isn’t used all that often anymore, so it really isn’t a huge loss in terms of our use of force continuum because there is so many more options. … To take it away from (the existing use of force policy),  if it makes people feel a little safer, especially in light of what happened in Minneapolis, I think it is a good thing for us in showing that we do want to cooperate and are more than willing to make reforms if they are deemed to be positive by both sides in showing we are all trying to work together.”

Q: Do you have the stats for how much the carotid restraint was used in your department?

A: “We keep stats on all use of force.In fact, we have to. All agencies have a use of force policy in terms of documentation. Not only is it covered with body-worn cameras now, anybody who uses force, even if they’re not the arresting officer but were just helping out, needs to document that use of force — what is that (use of force) they used, why they used it, how they applied it and how they took care of the subject after it was used, if in fact it required care. … For us at the community college police, I have been here for a year and half. We have not used it.

Q: Is there a place where you can find the use of force policy?

A: “Use of force policies are county-wide. … If you were to pull up the policies now, which I believe are on our website or I know San Diego (Police Department’s) is, the carotid restraint would still be in there. It has not been removed. However, a department order has been sent out by virtually every chief and sheriff in the county letting them know we have stopped using (a carotid restraint). … Anytime a department order comes out or a new policy comes out, that supersedes the written policy with the most current date and then the written policy is very shortly revised to ensure it is consistent with the new department order.”

A: “One of the misconceptions on the part of a lot of people who witness a use of police force is when they think it’s excessive. Any police force that is being used to a lot of people, especially if they come in on the back end of it, appears excessive. … If someone refuses to leave, or refuses to comply when they are under arrest or whatever the case might be, officers are not supposed to just walk away or it would be anarchy. They have to use whatever the appropriate force is to affect that arrest. One of the tactics that is taught is sheer body weight to get someone to ground to get them under control. … The action of the person who is being arrested or detained or asked to leave  has a lot to do with whether or not we have to use force. In fact, it has everything to do, because use of force is a response to resistance and sometimes people don’t understand why they are being placed under arrest. They may not agree, but what I tell my own children and as I tell the public when I speak to them, that is not the place to argue. You can ask questions but please do not start actively resisting. Do not start assaultive behavior because we are not going to back down. We can’t because we are obligated to enforce the law, we are trained to enforce the law and will use whatever force is necessary if in fact we feel like we have legal authority to arrest.

Now coming back full circle to what happened in Minneapolis. I wasn’t there. I saw what everybody else saw and it looks terrible. I feel terrible. I would never expect one of my officers to do that or any officer from any agency to sit there with a knee on the back of someone’s neck, as they are saying they can’t breathe. … It’s a hard thing to defend. I’m not even going to try to defend it. Things do not look like they were done correctly there. However, that said, it does not mean that every officer in the entire country is a racist. That would be the same as saying everyone who goes out and peacefully protests is an arsonist. They’re not, but there are some people who are using that to commit crimes, to loot and to burn places down. … Not everybody who has concerns about police work and police use of force and reforms as it, you know, pertains to the criminal justice system is a criminal. They are just concerned people and we welcome those concerns and that’s a lot of times what brings about change. We need to have those things but we cannot paint everybody with the same brush on any side. … Police officers are human and do make mistakes. … Sometimes people forget the importance to weigh all of that together.”

Q: Are there any other changes that are happening with the SDCCD Police Department?

A: “No, not at this point. … I think one of the things that will be certainly talked about at this year’s Regional Officers Training are any changes that may come about based on use of force policies and the elimination of the (carotid) restraint. We are not replacing it with anything because there’s quite a few things in the use of force continuum already.”

Q: Specifically SDCCD Police Department, how are you guys responding to the recent protests in San Diego?

A: “I have given several messages to (my officers). …We are going to be out all weekend to monitor the campuses and make sure that if any of the protests come by, that we block off the streets so that they can peacefully protest and keep their marches going. We’ve been doing that. But if they are thinking about looting or thinking about damaging, we are going to do whatever we need to do to try to stop that and keep the campuses and buildings safe because we want everyone to return to school and want everyone to have a school to return to. That is our role, to protect our property, to protect our students, to protect our staff, to make them feel safe. That is my message to everyone. We will always support, defend and facilitate everyone’s First Amendment right to assemble, First Amendment right to speech. But if you are a student of the constitution, you know that it is a First Amendment right to assemble peaceably. It says that right in there. It does not say in there that you can assemble and protest and start burning and looting. That’s where we draw the line, and we are all for that. You know that is what makes this country what it is. The ability to speak your mind, the ability to worship where you want to worship, the ability to assemble if you want to assemble but has to be done peaceably and we are here to ensure that’s what happens.”

Q: Do you have any advice or suggestions to protesters that keep them and your officers safe?

A: “What I will say is, if you are going to go to a protest and gonna participate, by all means. it is your right to do that and you should do that. But especially if you are bringing younger children to this, younger siblings or your own children, pay attention to what’s going on. Because if you yourself see that some of the people in the protest are now starting to get to the point where they are committing crimes, starting to throw things, starting maybe break things, starting to get even argumentative, that might be a good time for you to make a common-sense decision and say, you know what, this is not as peaceful as I would like it to be –whether it has been declared an unlawful assembly or not.”

Q: Is there anything else you would like to add?

A: “If anyone ever has any questions in our college community, I am more than happy to meet with them, more than happy to have these conversations with them. I will always be honest and upfront with them about law enforcement and our procedures and our take on things which I understand is very different than the take from, you know, a young student coming in. I think it is important for us to share our perspectives. I ask my officers to understand the perspectives of these young people, people who may have grown up in the inner city, people who have seen police activity that they may not understand or they feel is not just and understand that they have a different perspective.”

Correction: This story has been changed to reflect the correct spelling of the last name of San Diego Police Department Chief David Nisleit. The City Times regrets the error.

City Times wants to hear your voice. We are looking for our community — fellow students, faculty, staff and alumni — to share their perspectives on the recent protests against police brutality and racial injustice against the Black community. You can send your thoughts in writing by email or share them on social media, including @sdcitytimes and #cityspeaks. You can also leave us a voice recording.