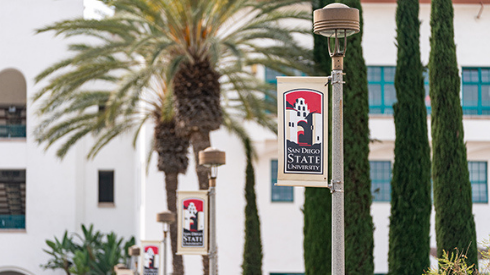 San Diego State University has canceled its traditional spring break for the 2021 semester.

The university’s senate made the decision on Tuesday in a closed Zoom session. It came after students became enraged in an earlier open session meeting. The vote was 44-28, with 7 senate members withholding their votes.

In place of the 9-day break period, the school has offered four “rest and recovery” days, when students would not be required to attend class, meetings or turn in assignments.

The latest on the announcement from SDSU is part of this week’s edition of Newscene, the student-produced weekly newscast that this week won a National Pacemaker Award for excellence in college journalism.

The senate made the change due to fears that partying and traveling students would further spread COVID-19, which would add to the over 1,779 cases reported by SDSU’s Student Health Services, as of Dec. 4.

“Community health should take precedence over mental health,” SDSU student Joshua Jensen said. “(But) the decision to discontinue spring break in favor of these four break days do not entirely deliver on their premise.”

[email protected] Faculty Senate voted in favor of keeping spring break next semester amid concerns of COVID-19 and students on campus after traveling, but the final decision is up to administration. https://t.co/WSxJoyu0TF

EDD extends unemployment: California taxpayers whose 26-week unemployment benefits have been exhausted have been approved for a 13-week extension.

The extension is part of the Pandemic Emergency Unemployment Compensation, which is under the federal CARES Act provisions.

Closures will be similar to those earlier this year.

They will include hair and nail salons, gyms, dining at restaurants, and a ban on all non-essential traveling.

California to receive vaccine: Newsom has revealed that Californians will receive 327,000 doses of the Pfizer vaccine “in the coming weeks.”

The governor said that there is no current plan for how the vaccine will be distributed, but most other states and countries have prioritized healthcare workers and the elderly.

The announcement of Elliot Page: The star of the movie Juno, Elliot Page, has announced on social media that he is transgender.

He posted a letter on his social media accounts saying that he is lucky to have arrived at this place in life and added that his pronouns are he and they.

Many people such as Page’s spouse Emma Porter congratulated the star on his courage to make the announcement.

NBA Christmas games: Even with COVID-19 still on the rise, the NBA has announced it still plans to play games on Dec. 25.

The games will start at 9 a.m. and continue throughout the day.

The primetime game will feature the defending champions Los Angeles Lakers and the Dallas Mavericks.